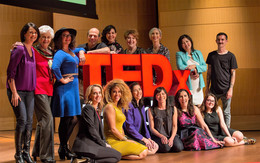 Rise to the challenge! Rise up! Rise and shine! Any way you look at it, rise is a little verb packing some serious positivity. And, with today’s global digital culture delivering what can seem like an endless stream of bad news, some serious positivity sounds downright empowering. This year’s event is dedicated to great thinkers who’ve dared to believe we can build a better world by calling on that power. Their ideas have—in some way great or small—suggested it’s possible to trade the heaviness of hopelessness, resentment and self-preservation for the lightness of anticipation, curiosity and self-sacrifice. Join in for a day dedicated to transcending the past and transforming the future. RISE —get ready to celebrate Ideas That Elevate!

Amanda Southworth is a programmer, designer, and creator of the apps, AnxietyHelper and Verena. She has been coding since she was 10 years old, and created both of her apps when she was just 15. Her apps are designed to provide safety, information, and emergency help to those who are struggling with mental illness (AnxietyHelper) or are a member of the LGBTQ+ community and need emergency support (Verena). In 2017, Amanda won the Worldwide Developers Conference (WWDC) Scholarship from Apple. She also worked with Teen Vogue to write articles about her experience at WWDC, and report live from the event. A born problem-solver, Amanda is passionate about using her privilege and experience to help those who don’t have that same privilege. She is committed to using the platform she’s growing to spread a message that (hopefully) helps others too.

Amara Barroeta is the owner of Amara Chocolate & Coffee Cafe in Pasadena, California. Originally from Venezuela, Amara emigrated to the United States in 2010. Prior to leaving Venezuela, in 2002, she was crowned first runner-up in the Miss Venezuela pageant, which lead to a position as a television newscaster and the chance to travel the world (most often, to Hollywood.) During this time, Amara remained committed to her university degree and ultimately graduated as a Chemical Engineer, with a specialization in food processing. In 2010, Amara came to the US to study for her MBA at UCLA. The increasing political unrest and corruption in her home country led Amara to make the difficult, but heartfelt, decision to stay permanently in the United States. In 2012, utilizing her background in chemical engineering, the skill-set acquired from her MBA, and her bright, friendly personality, Amara translated her myriad talents to business ownership, opening Pasadena’s first Venezuelan cafe and qui

Carri Twigg is a cultural/campaign strategist and a unique millennial voice. She served as Special Assistant to President Obama during his administration, overseeing White House efforts to protect the rights of working Americans. She also served as Director of Public Engagement for Vice President Biden. In that role, Carri was a senior advisor to the Vice President and crafted his public-facing work on behalf of the administration. Additionally, Carri served as a White House liaison to the creative community, helping to expand the cultural competencies of the White House beyond its previous dimensions. Carri has also built and consulted on strategic cultural movements, including the California-based Schools Not Prisons Tour and the SuperPAC Save The Day with director Joss Whedon, which created multiple viral videos throughout the election.

Grace is the CEO and Founder of the GKC Group, a leadership development firm based in Philadelphia. An accomplished human resource and talent executive, Grace’s work rests on what she has identified as the four cornerstones of leadership: relationships, reputation, results, and resilience. Using these pillars, Grace encourages CEOs, executives, and professionals to elevate their leadership skills and transcend their perceived limitations to achieve sustained business and personal success. Grace founded and runs 7 leadership program annually: Half The Sky Leadership for Women and Quattro Leadership, a co-ed offering. Her book, “The Confidence Effect”, was listed as one of the top business books of 2016 by INC.com and has been one of the top 10 best-selling books for Women in Business on Amazon.

Hui-wen is a pediatric intensive care unit (PICU) nurse. Prior to becoming a nurse, she conducted research amongst the frail elderly in nursing homes, which included toileting, feeding, and exercise interventions to demonstrate the need for greater staffing levels. The research work motivated her to become a bedside nurse, as she found herself drawn to both the science and the art of skillful, wholehearted nursing. Hui-wen is now passionate about giving voice to the oft-hidden heart experience of nurses as they work in vulnerable closeness to the sick, suffering, and dying. As such, her writing has been featured in Off the Charts, the blog for the American Journal of Nursing (AJN), and the Oxford Handbook of Meaningful Work. Her essay titled “Intimate Strangers” will be published in the August 2017 edition of AJN.

Jenny Watts is Curator of Photography and Visual Culture at The Huntington Library, Art Collections, and Botanical Gardens in San Marino, California. She oversees a collection of approximately one million images that date from the beginning of photography to the present day. She has written and edited acclaimed works on photography and visual culture, and her exhibitions have explored such topics as architectural photography, death in the Civil War, and the imagery of Los Angeles. She is also active in several organizations committed to racial justice and racial reconciliation, and she enjoys art (and art making!) in her spare hours.

Joyce Ruygrok has held many professional and community roles including as a long-time member and former president of the local PTA. She worked in La Canada as a Counseling Center Administrator, a Tournament of Roses volunteer, and on the Board of Directors for the Chamber of Commerce. Joyce founded Diet 4 Health in 1980, an organization which is still active today—and founding member of Canada Auxiliary of Professionals of Assistants League of Flintridge, where she served as President and received the Les Tupper Community Award. For the past seven years, Joyce has sat on the Hillside Learning Center Board of Directors, and spent the last two years volunteering as a Senior Warden at St. George’s Episcopal Church. Her proudest achievement yet, however, is as mother to three beautiful daughters, and as grandmother to three grandsons and one granddaughter.

Lila Higgins is an avid urban nature explorer with degrees in entomology and environmental education. Her favorite nature space in Los Angeles is the L.A. River, where she leads river tours, picnics, and was part of the artist collective, Project 51: Play the L.A. River. Lila currently works at the Natural History Museum of Los Angeles County, where she runs the Citizen Science program.

Dr. Lisa Strohman is the founder and director of the Technology Wellness Center and the Digital Citizen Academy. She is one of the foremost experts in the field to address the global issue of technology addiction and overuse through parent and educator resources, trainings, and education; as well as prevention and diversion programs for kids. She has worked in addiction and brain research for Congress, the FBI, and most recently as an attorney and clinical psychologist.

Mei Fong is a Pulitzer-prize winning journalist and author who has covered Asia for many years as a Wall Street Journal correspondent. Her first book—“One Child: The Story of China’s Most Radical Experiment”—debuted in 2016 to critical acclaim from the New York Times, Guardian, Independent, Ms., The Times of London, and Telegraph. It was called “a searing, important, and eminently readable exploration of China’s one-child policy,” by Nick Kristof in the New York Review of Books. The book was also chosen as one of the top 10 non-fiction books of 2016 by Zocalo; named one of Medium’s Best Human Rights Books of 2016; and is recommended reading by the Council of Foreign Relations, TED, and Economist magazine’s lifestyle and ideas publication,1843. Mei, a fellow at DC-based think tank, New America, was also named one of the Top 50 people to watch on US-China relations by Foreign Policy magazine. She graduated from the National University of Singapore and has a Masters from Columbia.

Ryan Pfluger is a New York-based photographer. His photographs often deal with the subtly of body posture, the gaze, and the role of self-portraiture, as an exploration of what portraiture means in our presently-saturated culture of images. For the past year, Ryan has been driving cross-country every few months making portraits based off of geo-location apps. Some of his clients include New York Times Magazine, The New Yorker, New York Magazine, and TIME. Born and raised in New York, Ryan received his MFA in Photo, Video and Related Media from the School of Visual Arts in 2007.

Steve Elkins has worked in television for 30 years as a cinematographer, editor, and producer. While filming in Honduras in 1994, Steve became fascinated with the Honduran Mosquitia and its lost city legends. In 2012, after reading about the advent of airborne lidar as a tool for unveiling archaeological ruins, he formed UTL – Under the Lidar with colleagues to explore the Mosquitia jungle using lidar which resulted in the discovery of two “lost cities”. Three years later, Steve and his partner organized a multi-disciplinary scientific ground expedition to one of the sites. The results and ongoing work have garnered world media headlines including feature articles in the New Yorker, National Geographic, an episode of National Geographic Explorer, and a New York Times bestseller non-fiction book, “The Lost City of the Monkey God”.

Valerie Alexander is the Founder and CEO of Goalkeeper Media, maker of communication bots to amplify happiness, including the Happy Couples Bot. Valerie has extensive experience in corporate and start-up arenas, but left Silicon Valley to find success as a screenwriter in Los Angeles. Valerie wrote, produced and directed more than 50 shorts, commercials and PSAs, including the award-winning, anti-bullying short film, “Ballpark Bullies”, and the groundbreaking commercial, “Say I Do”, in support of marriage equality. As author of the Amazon #1 seller, “Happiness as a Second Language”, and a nationally known speaker on happiness in the workplace and the advancement of women, Valerie is a recognized expert on the topics. In addition to “Happiness as a Second Language”, Valerie’s books include “Success as a Second Language” and “How Women Can Succeed in the Workplace (Despite Having “Female Brains)”. She holds an honors certificate in the Science of Happiness from the Greater Good Science 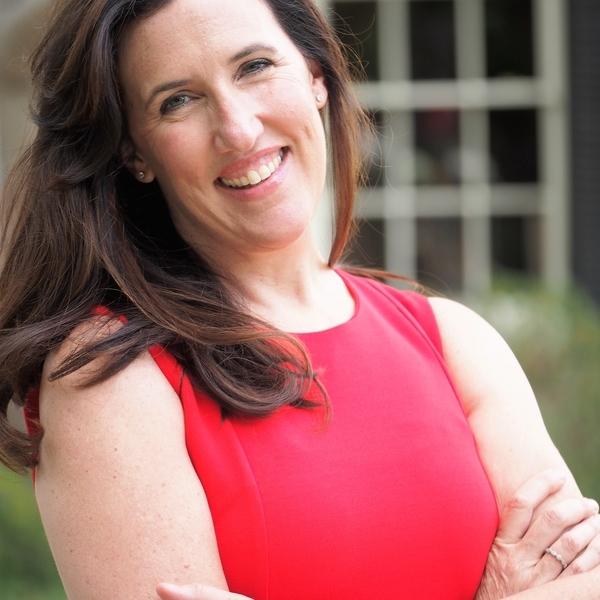