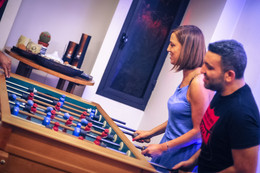 TEDxSKE is a weekly TEDx salon held at our home.

After watching Jill Bolte Taylor's amazing talk "My Stroke of Insights", we immediately got hooked to TED, and our first thought was that this is too good not to be shared.

This is how we got the crazy idea of inviting our friends over to our place to watch TED talks and discuss them, a kind of a TEDxSKE salon...

Our friends were crazy enough to commit to these gatherings, and we've been doing these weekly TEDxSKE sessions every week, NON-STOP since then!

It started with friends, ended with complete strangers, knocking on our door, attending the sessions, adding value to our gatherings.

At first, it was fun, but then we realized that these gatherings were affecting us and the attendees so much! Change was happening, new ideas were born and discussed, people were being more open to looking at the other perspective, from the other side of the coin, people were taking action, and this is where we realized the POWER of TED.

Under the official mission of "Spreading Knowledge & Entertainment", TEDxSKE aims at reviving intellectual discussions among groups, triggering mind-boggling subjects, and as a byproduct, we also regained the lost art of debate along the way...