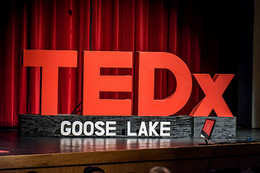 The goal of this TEDx event is to challenge the current ideas that audience members and viewers have about a variety of topics from our use of technology to our current lack of empathy. Our speakers plan to discuss how we can change our perceptions about technology and career choice, social media, education, the male emotional response, inmates, and disabilities, and offer us suggestions on how we can make caring cool again. Each of our speakers has an extraordinary story to tell and it is our hope that you can join us on this amazing journey!

In contrast to some of our other speakers, Alice Topaloff is not from Clinton County. She isn't even from Iowa, although she lives here now. Alice is originally from Paris, France and came to the United States to study sustainable agriculture. Alice worked at ISU's Local Foods Program and got involved in a program led by ISU Landscape Architecture department bringing green spaces to prison. She continues to work at the Iowa Correctional Institution for Women, and is also serving as the operations manager for Youth M.O.V.E. National, a "youth led national organization devoted to improving services and systems that support positive growth and development by uniting the voices of individuals who have lived experience in various systems including mental health, juvenile justice, education, and child welfare." Alice finds inspiration in people and looks for ways to create positive connections for those facing unique challenges in their personal lives. She also loves stinky cheese!

Julie Stevens is an Assistant Professor in Landscape Architecture at Iowa State University. Her research and teaching prioritizes are centered on improving the health of people and landscapes by creating mutual stewardship through engaged design. Beginning in 2011, she has partnered with the Iowa Department of Corrections to create restorative and productive landscapes in Iowa’s prisons. With teams of dedicated students and offenders, the Environmental Justice In Prisons Program has expanded the production gardens and completed three therapeutic at the Iowa Correctional Institution for Women. Efforts are now extending to other prisons in the state with the help of evidence-based design and programming.

Eighteen-year-old Kyle Dell is a senior at Northeast High School. In addition to being an outstanding student, Kyle is an exceptional athlete. He plays basketball and baseball and was named First Team River Valley North for these two sports. As the starting varsity point guard, Kyle has been instrumental in leading the Rebels to a successful season. He also serves as a role model to both elementary and middle school students through his participation in Big Brothers Big Sisters and the Middle School Mentors Lunch program. "Striving to leave people and places better than [he] found them" is something Kyle finds inspiring and is one of the ideas he will touch on during his talk. When asked why he became involved in this process he said, "I believed I could offer a unique perspective compared to the other speakers since I am a high school student." After graduation, Kyle plans to continue his education at Central College to major in exercise science and play basketball.

Kyle Weber grew up in Dunkerton, Iowa, a small town located in the Waterloo-Ceder Falls area. Like some of our other speakers, Kyle spent his childhood on a farm. He has five brothers and is inspired by his parents "who raised six boys, worked full time, farmed, and built their house at the same time." Kyle completed his education at Wartburg College where he majored in biology and biochemistry, with a minor in chemistry. He went on to earn his Master's in Business Administration from Upper Iowa University. Kyle currently works for ChemTreat in Eldridge, Iowa, a company that makes industrial chemicals. He is in charge of maintaining high quality assurance with inbound and outbound materials. Kyle is excited to give this talk because he "wants people to be aware of how technology changes and impacts daily activities at home and at work." He also has a quirky habit of making sure that the television volume is a factor of five if it is displayed on the screen.

In his faculty position, Mark is a professor in the Department of Veterinary Pathology in the College of Veterinary Medicine with responsibilities and activity in research, clinical service in surgical and post-mortem pathology, and teaching. Mark's laboratory investigates the cellular and molecular mechanisms that predispose perinatal lung to respiratory syncytial virus (RSV) infection in preterm and term lambs that closely mimics respiratory syncytial virus (RSV) infection in human infants. He is a board-certified pathologist with clinical service for the ISU Lloyd Veterinary Teaching Hospital, veterinary practitioners in Iowa and does consultation work throughout the United States. He is currently Secretary/Treasurer of the American College of Veterinary Pathologists (ACVP), whose members are specialists in the clinical discipline of veterinary pathology. In addition to his faculty work, he also currently serves as Assistant Dean for Research and Graduate Studies at ISU CVM.

Nancy Kachel served as the Executive Director for Domestic Violence Intervention Services, Inc. (DVIS) of Tulsa, OK for 3-1/2 years. As President CEO of Planned Parenthood of Arkansas and Eastern Oklahoma, Inc., Nancy worked locally and nationally to promote sexuality education and reproductive health care for men and women. Nancy has been a Board member of SouthCrest Hospital, founder and previous Chair of Community HealthNet, Inc., a corporation of community based organizations including the universities, Department of Health, etc., and served on numerous committees, frequently as Chair, on prevention and wellness, and the health care needs of women, men and their families in Oklahoma. In 1993, Kachel was appointed to serve on the Governor’s Commission that developed the Oklahoma Health Care Authority. She is married to Dr. A. Theodore Kachel, writer and performer. They are the parents of three adopted Colombian children, and they have one grandson.

Current Iowa State Senator Rita Hart is a small town girl who is making a big impact. Rita was born in Big Rock, Iowa, a don't blink or you might miss it kind of town. Rita earned a B.A. from the University of Northern Iowa and later a M.A. from the University of Iowa. She spent her early years as a teacher at Calamus-Wheatland High School working with talented and gifted students. After years in education, Rita found her way into politics, eventually willing a seat in the Iowa Senate in 2012. While in office, she has been a champion for education and agriculture. She has served as a co-chair for the Agriculture Task Force. She is also part of the National Conference of State Legislatures and the Council of State Government. When she is not engaged in official government business, Rita spends her time working on her family farm. Books, music, church sermons, and young people are all places where Rita draws inspiration. She is also an amazing singer and likes to perform karaoke!

Speaker Shawn Hamerlinck is a local addition to our list and lives in Clinton County. Over the years, Shawn has acquired an impressive resume in public service starting with his work as an adolescent substance abuse counselor. He continued his work with youth as an Adjunct Professor at Black Hawk College before moving on to teach at Augustana College and in the Eastern Iowa Community College District. He is currently a full-time instructor at Clinton Community College in Clinton, Iowa. In addition to teaching, Shawn has served two terms on the Davenport City Council and one term in the Iowa State Senate, representing the 42nd District of Clinton and Scott Counties. In 2014, Shawn was elected to the Clinton County Board of Supervisors and became chair of this board in 2017. Shawn is married to his wife Amy and together they have six amazing children. In his free time, Shawn can be found at wrestling meets, baseball and softball games, or hauling the gang around in his mini-van!

Willy Amos joins us from Mount Pleasant in East Central Iowa, a place he has called home for the last 16 years. Willy is currently serving as the store director for the Mount Pleasant Hy-vee Drug Store, a position he recently acquired at the start of 2017. Before taking on this new challenge, Willy worked out of the Hy-vee Corporate Office in Des Moines and has been with the company for 30 years. He also serves as a mentor and coach for a youth baseball program in his community. For inspiration, Willy looks for positive interactions from those around him. "When I see people who are really upbeat and positive, it inspires me to do the same and try to pass that along. I am also inspired by people who are resilient. Those who have been through something life changing and still have a positive outlook in general. They seem to really understand what life is about." For this event, Willy will look at how to change perceptions as they relate to individuals with disabilities.