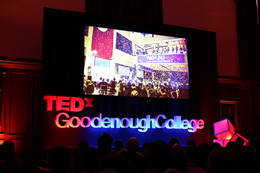 From the gradual and continuous development that necessitates evolution, to the abrupt and sudden change that constitutes revolution, TEDxGoodenoughCollege will explore how and why the world and its inhabitants are constantly changing, and where this may lead us.

How is neuroscience connected with acting? Anjali Bhat and Jorge Balça explain acting as a balance between feeling our internal environment and experiencing the outside world. Jorge Balça is an award-winning stage director, performer, teacher, and academic. Anjali Bhat is a neuroscientist interested in bridging the gap between molecular biology and abstract concepts in cognitive science. Learn more about Jorge Balça & Anjali Bhat at http://www.tedxgoodenoughcollege.com/portfolio/jorge-balca-me-my-body-and-everyone-else-the-changing-body-from-within-and-without/ and http://www.tedxgoodenoughcollege.com/portfolio/anjali-bhat-me-my-body-and-everyone-else-the-changing-body-from-within-and-without/

Ms. Ayesha Siddique Khan, a lawyer by profession, grew up in rural Pakistan and is currently studying international politics at SOAS, University of London as a Chevening scholar. Ms. Khan will be speaking about the triple life she has lived, as a woman living in a rural village, as a practicing lawyer in Islamabadx, and as a student in the West. She will be speaking on how it is possible to live a double or triple life whilst maintaining your distinct identity. She will explain through her personal journey how she overcame the cultural barriers to accomplish her goals, and how many people, particularly women, can relate to her story.

Joint-head of climate policy at the Grantham Research Institute on Climate Change and the Environment, London School of Economics (LSE)

Dimitri Zenghelis is joint-head of climate policy at the Grantham Research Institute on Climate Change and the Environment, London School of Economics (LSE). In 2014, he was the acting chief economist for the Global Commission on the Economy and Climate. He was recently senior economic advisor to Cisco’s long term innovation group and an associate fellow at the Royal Institute of International Affairs, Chatham House. Previously, he headed the Stern Review team at the Office of Climate Change, London, and was a senior economist working with Lord Stern on the Stern Review on the Economics of Climate Change, commissioned by then-Chancellor Gordon Brown. Before working on climate change, Dimitri was head of economic forecasting at HM Treasury. He was also head of the analysis branch of the European Union’s Economic and Monetary Unit (EMU), which informed and administered any future assessment of the five economic tests reviewing progress of the single currency in the Euro area.

Dr Helen O’Neill is a molecular geneticist at UCL. She did her BSc in Molecular Genetics at University College Cork in Ireland and her MSc in Prenatal Genetics and Fetal Medicine at UCL. Dr O’Neill then did her PhD and postdoctoral research in the Department of Stem Cell Biology and Developmental Genetics in the laboratory of Professor Robin Lovell-Badge at the National Institute for Medical Research. There she researched the genes involved in sex determination, including genes crucial for the formation of ovaries. Helen is currently in the Embryology, IVF, and Reproductive Genetics Group of the Institute for Women’s Health at UCL, where she works on the morphokinetics of preimplantation embryos and is using CRISPR genome editing to assess the treatment and understanding of sex chromosome disorders and neuromuscular disorders. Helen is also the programme director for the MSc in Reproductive Science and Women’s Health at UCL and lectures both masters and medical students.

Founder and CEO of Immersive Rehab

Dr ir Isabel Van De Keere is an innovator, strategist, and problem-solver. She loves building products that make an impact on people’s daily lives. With a background in electro-mechanical engineering and as a biomedical engineering scientist, Isabel is passionate about healthcare technologies, digital health, immersive technologies (VR/AR) and their applications in healthcare, using tech for good, social entrepreneurship, and promoting women in tech. Isabel is the founder and CEO of Immersive Rehab, a health-tech startup that focuses on the creation and development of interactive environments and games in virtual reality that improve the effectiveness of physical and neuro-rehabilitation. Following a long physical rehab period she went through herself due to a work accident, Isabel decided to start Immersive Rehab in September 2016.

Dr Jorge Balça is an award-winning stage director, performer, teacher, and academic. A classically-trained actor and counter-tenor, he holds a BA in Performing Arts (Drama) and an MA in Theatre Directing (partly taught at GITIS, Moscow), both from Middlesex University. He has recently completed his doctoral research “When a Voice Is Not Enough: The Existentialist Opera Performer as Auteur” at University of Portsmouth. His research interests include performer training, creativity, practice-as-research, and the body in performance. His work has been performed internationally and he is the current artistic director of Bloomsbury Opera.

Kat Kai Kol-Kes is an international award-winning Trans* ARTivist, writer, theatre producer, educator, performer, and skill donor. A self-defined, relentless Motswana, her work on queerness and queer livelihoods in contemporary African society is strongly rooted in situating herself – and others like her – as citizens and participants in the shaping of the Botswana’s future. Her groundbreaking work as a theatre producer includes founding the Queer Shorts Showcase Festival (Botswana), and crafting productions like AfriQueer Now!, Shelf Life Zero, and Keledi. Her debut poetry collection, published by Bahati Books is Botswana’s first collection of queer-themed poetry. Katlego is a member of the World Economic Forum’s Global Shapers Community, the Mellon Mays Fellows Professionals Network, and was a highly commended runner-up for the 2016 Queen’s Young Leaders Awards. She is a 2016/17 Chevening scholar and an alumnus of the Young African Leaders Initiative.

Historian and University fellow at the London School of Economics (LSE)

Maria Chen is a university fellow at the London School of Economics (LSE). She is a historian of European policy and culture with a research background in European Union (EU) institutions, intellectual property, and agriculture. Maria is fascinated by identity. At the forefront of her mind are questions of how food and drink culture, music, ownership of ideas, and historical memory affect who we are and how we present ourselves. Maria has taught university courses on 20th century Western European history, the social construction of markets, climate change governance, and global poverty and inequality. She serves on LSE’s Ethics Policy Committee, where she advises on ethical decision-making. Maria is also a contributing expert analyst on Brexit and EU policy to Oxford Analytica. In 2017, she was one of 24 experts chosen from across the country for BBC Academy’s ‘BBC Expert Women’. Twitter: @mxc_music @mariaxchen

Dr Rob McInerney is the founder & CEO of Intelligent Layer and co-founder of IntelligentX Brewing Company. He completed his PhD in Machine Learning at the University of Oxford, where his research focused on how intelligent machines should learn from experience through a process of reinforcement learning. In 2015, Rob founded Intelligent Layer to re-envisage the relationship between human beings and intelligent technology, underpinned by his belief that AI can help us navigate a world that is changing faster. Last year, he created IntelligentX Brewing Company, a self-evolving beer brand that uses AI to optimise beer recipes using customer feedback, which Popular Science voted “the third greatest software innovation of 2016”. Intelligent Layer recently graduated from Techstars in New York City, one of the world’s top accelerator programmes. Rob regularly contributes to topics around AI and machine learning and has been featured in Time, Wired, Forbes, The Guardian & The Huffington Post

Professor Shafi Ahmed is a surgeon, teacher, futurist, innovator, entrepreneur, and an evangelist in augmented and virtual reality. He is a cancer surgeon at the Royal London and St Bartholomew’s Hospitals and is associate dean of Bart’s Medical School. He has been given the accolade of being the most-watched surgeon in human history. He received the Silver Scalpel Award in 2015 as the best national trainer in surgery and in 2017 was named the British Bangladeshi Person of the Year. He is currently serving as an elected member of the council of the Royal College of Surgeons, where he leads the international surgical training programme. His mission is to merge the world of medicine, global education, and virtual reality to democratize and scale surgical education to make it affordable and accessible to everyone by using the power of connectivity to allow equitable surgical care. He co-founded Medical Realities, which recently released the first VR interactive surgical training module.

A former lawyer, techie, and school counselor, Sophie Deen is the founder of Bright Little Labs, a media start-up on a mission to create Sesame Street for the digital age. Her flagship story, Detective Dot, is about a nine-year-old coder who is an agent for the CIA (Children’s Intelligence Agency). The idea is to help teach kids, especially girls and underrepresented groups, to code. The book has reached over 30 countries, is backed by the Cabinet Office, and is launching in 18,000 schools this September with the support of EDF Energy. Bright Little Labs are now creating an interactive world to ‘edu-tain’ with games, animations, and on-demand content. Sophie previously worked at Code Club and, alongside Google and the Department For Education, introduced the first coding curriculum in primary schools. Her awards include the Barclays Startup Founder of the Year 2017, British Interactive Media Association Innovator 2017, and Computer Weekly’s ‘Rising Star’ 2016. Sophie is extremely passionate about creative education, diverse role models, and the power of stories to inspire the next generation.

Advocate for the revolutionary power of the humanities

Born and raised in Italy, Valeria Valotto was lucky enough to turn one her lifelong passions, chatting, into an academic interest, languages. Her undiscriminating love for words took her to pursue living and dead languages, to eventually focus on the Latin word res publica for her PhD at King’s College. Valeria is an advocate for the revolutionary power of the humanities and believes that understanding words can help us understand, and eventually change, the world. Her mission is to showcase linguistics in unusual settings, experimenting with arts installations and talks for a broader public. Besides loving words and their history, Valeria is passionate about people and their stories, which is why she works for a community charity south of the Thames, and spends her free time immersing herself in the local history of the East End, where she currently lives. 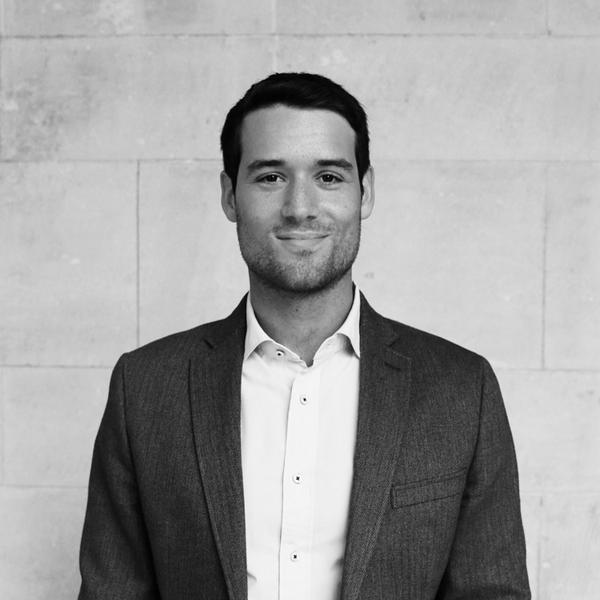 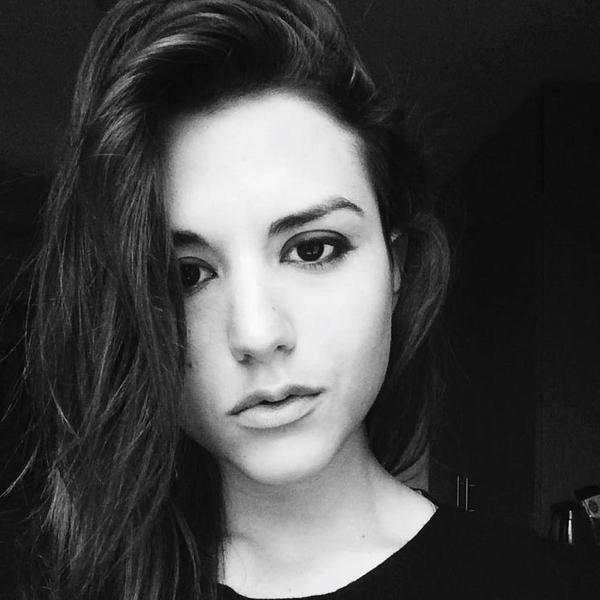