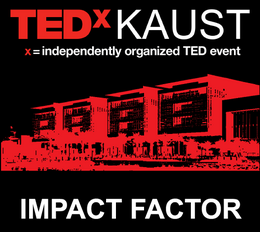 Impact Factor is one metric for measuring the academic achievements of a university. However, we aim to redefine the term Impact Factor. We aim to focus more on the holistic impact of ideas and individuals.
The ideas and talks that will be presented at this TEDx intend to encourage people to pursue a life that has impact beyond simple measurable outcomes.

Throughout her career, Amal gained a diversified range of experience in management and marketing related roles, particularly in education and consultancy. Currently, Amal is part of the Entrepreneurship Center at King Abdullah University of Science and Technology in a number of roles including the New Ventures Acceleration and Corporate Innovation program. Prior to that, she worked in the KAUST Seed Fund where she developed marketing and events, while also providing a range of services to startup clients. Amal has previously managed an educational organization; during that time she designed programs and started several innovative initiatives to be implemented by the educators to improve the mindsets in order to foster creativity in the workplace and the educational tools.

Andy has degrees in both psychology and education from the University of Windsor in Ontario, Canada. He and his wife, Neila Steele, embarked on an international teaching career in 1997 that have led them to living and working in Hiroshima, Japan (1997-2007), Baku, Azerbaijan (2007-2009), Phnom Penh, Cambodia (2009-2011), Nanjing, China (2011-2016), and currently KAUST (July 2016-present). Andy previously worked as a Child-Youth Counsellor at a young offender’s facility in Windsor, Ontario and it was through this experience that he first realized the stumbling blocks and injustices that many of these young people faced in their daily experience. Andy is an innovator in the area of education and has continued growing his commitment to student learning by bringing the global community together to create meaningful progress in the way students learn around the world.

Cabby has a BA from Williams College and an M.Ed. from Harvard University. His home of record is a cabin in the North Cascade Mountains of Washington State. After five years teaching English and Math at the Lakeside School in Seattle, Cabby started a career in international education, serving as teacher and administrator for schools in Tanzania, Taiwan, Egypt, and Johannesburg. At present, he serves the KAUST School in Thuwal, Saudi Arabia. Cabby has a passion for experiential learning, citizenship and service learning and peace education. As an Eagle Scout he has founded two Boy Scout Troops and at present serves as scoutmaster of BSA Troop 13 in Thuwal, Saudi Arabia.

Claire is a professional communicator and community builder focused on using science and technology for social benefit. She currently works in communication for the KAUST Core Labs, a dazzling array of leading scientific equipment and brainpower including the fastest supercomputer in the middle east.

Itsikiantsoa Randrianantenaina grew up in a small village in Madagascar. After high school, she moved to Morocco for her undergraduate studies. She is passionate about learning and believes that everyone has the right to education.

Manuel's group studies corals and the mechanisms involved in regulating the symbiotic relationship they have with the photosynthetic algae that live in their tissues. His goal is to better understand why corals bleach in response to heat stress and to find ways to help them cope with climate change. He studies corals that live in very warm environments, such as the Red Sea, to understand how they managed to adapt to these conditions and to determine if the underlying traits and mechanisms could be harnessed to help corals in other regions. Manuel is a Spaniard born in Germany and has lived with his family at KAUST for the past 7 years.

After a Ph.D. in Cambridge and lectureship there, he went to Adelaide, as a Research Professor in the Australian Centre for Plant Functional Genomics and Director of the Australian Plant Phenomics Facility. Mark led the establishment of this Facility, a $55m organisation that develops and delivers state-of-the-art phenotyping facilities, including The Plant Accelerator, an innovative plant growth and analysis facility. In his research group, forward and reverse genetic approaches are used to understand salinity tolerance and improve this in crops such as barley and tomatoes. His aspiration is to develop a new agricultural system where brackish water and seawater can be unlocked for food production.

"Why I do what I do?" has always kept Muhammad (Mustafa Hussain) inspired in his quest to augment the quality of our life. He hailed from the University of Texas at Austin as a Ph.D. in the Solid State Electronics where his Ph.D. and follow-up research paved their ways to every single microprocessor Intel has marketed in the last 8 years and every single iPhone and Samsung Galaxy we use today. He gained technology leadership experiences while working for Texas Instruments, SEMATECH and US DARPA. He learnt how to simplify complex engineering challenges and to innovate from everyday needs that we have.

Nadhmi A. Al-Nasr began his career with Saudi Aramco in 1978, just days after obtaining his Bachelor of Science in Chemical Engineering from King Fahd University of Petroleum and Minerals (KFUPM). A third-generation Saudi Aramco employee, Mr. Al-Nasr spent his first three years in Engineering Services. In 1981 he began working on the execution of the Kingdom's Master Gas System - the largest industrial project of its kind at the time, where he divided his time between Houston and on-site at the Uthmaniyah Gas Plant. The program was completed in 1984. Today it is one of the world's largest single hydrocarbon networks and a major factor in the Kingdom's diversification and economic development activities.