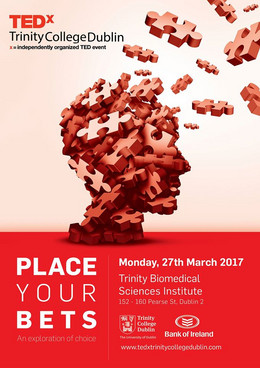 Here’s the moment you’ve all been waiting for… It’s time to announce the first edition of TEDxTrinityCollegeDublin!
On the 27th of March, our nine distinguished speakers will present a range of thought-provoking, inspiring talks based on the theme “Place your bets”. Driven by the complexity of decision-making in all spheres of life, we have combined the best speakers in the field, motivated by their own personal experiences, to share their unique ideas with all of us at Trinity College and beyond.
Our broad theme “Place your bets” aims to inspire us all to question and think about the way that we take decisions, at times with life-changing consequences, as well as the way in which others may take them for us. Life in itself can be seen as a gamble, a series of bets we take that trace our unique trajectories, and so our theme will relate to each and every one of us in several ways. With this in mind, our conference will address these interesting issues within a variety of topics, including sociology, politics, technology, business, finance, journalism and science.
We are honoured to have such insightful speakers attending our event, which we will gradually announce over the following days. Thanks to them, we would like to contribute to the spread of new ideas within the university community and beyond. Place your bets on us: buy a ticket to TEDxTrinityCollegeDublin on the 27th of March to hear these unique “ideas worth spreading”!

Trinitones are the pioneers of ‘popular’ a cappella performance in Ireland, dazzling audiences the island over with their inventive and un-orthodox takes of the songs you love to hate, and really hate. Formed in 2012 by Patrick Barrett and Lynsey Callaghan, the all male group experienced significant growth in the wake of a confused cover of ‘Teenage Dirtbag’ which, when released in 2013, even captured the attention and praise of Wheatus themselves. With an ever-changing line-up of singers, and a diverse repertoire of music that appeals and entertains even the most conservative audience, Trinitones continue to promote high quality choral music with an energetic and engaging live show that is not to be missed.

Alex is a Senior Sophister student at Trinity College Dublin, pursuing a Bachelor’s degree in English and French. He has been in numerous societies over his time in college, including the Voluntary Tuition Programme (VTP), Trinity College Singers, and two underwhelming stints with Trinity's rugby club, DUFC. This year he featured in two theatre productions with TCD - DU Players' Castaway Stan and Trinity Musical Theatre's upcoming inaugural show, West Side Story. . Alex's interests include education, films and comic books, but it is the subject of mental health and its stigmatisation that led him to apply as a speaker at TEDxTcd.

Graduating with first class honours in Law and Business from Trinity College Dublin, Ben joined Stripe as one of the early employees in the Dublin office. Ben’s interests lie in behavioural science and social entrepreneurship, and founded Keep Appy - a way for young people to take note of and track their emotional wellbeing. A former Business Student of the Year and National Student Entrepreneur 2015 Winner, Ben now focuses on blogging and trying to keep up with his weekly New Yorker subscription.

Ed is a foreign correspondent and journalist, having reported for The Guardian and The Observer. He worked extensively in Bosnia in the early 1990s during which he uncovered a series of concentration camps. He later covered the Iraq wars in 1991 and 2003, and the 9/11 attacks. He has since worked on the Mexico narco-cartel wars and the Colombian FARC. Ed’s work has earned him most major awards in British journalism, and the coveted Kapuściński Award for literary reportage. He has recently retired to become a full-time author.

Frank Bannister is an Associate Professor in Information Systems in Trinity College. Dublin. Prior to becoming an academic in 1995, he worked in both the Irish civil service and for PricewatershouseCoopers as a management consultant. His research interests are e-government, e-democracy, on-line privacy and trust and IT value and evaluation, particularly in the public sector. He is chairman of the European Conference on e-Government, a member of the European Group on Public Administration and editor of the Electronic Journal of e-Government. Frank is a Fellow of Trinity College, Dublin, a member of the Institute of Management Consultants in Ireland, a Fellow of the Irish Computer Society and a Chartered Engineer.

Ian is an eminent neuroscientist and founder of the Trinity College Institute of Neuroscience. He has authored many books based on the pressures of everyday life – his most recent book, The Stress Test, has been sold widely across the world. Ian contributes regularly to Nature and the Journal of Neuroscience.

Ioustina is the first winner for TEDxTCD’s students competition. She is a Junior Sophister student at Trinity College Dublin, pursuing a Bachelor’s degree in Business and Economics. She has Russian and Irish origins, which makes her fluent in both languages. Ioustina was offered the great opportunity last November to speak in front of the Russian State Duma, which chairs the ministers and the president. At a later time, she met Robert Kiyosaki, the author of “Rich Dad Poor Dad”, who has inspired her a love for public speaking and has led her to apply as a speaker at TEDxTrinityCollegeDublin.

Marco is the 27-year-old CEO of the largest bitcoin mining company in the world, Genesis Mining. Trained as a mathematician, he dropped out of university to pursue his business idea. Today, Genesis Mining boasts 300,00 daily customers, and prides itself of having created one of the most sustainable and profitable business models in the Bitcoin Cloud mining world.

Richard is a Professor of Sociology at Trinity College Dublin and a Research Professor at the Economic and Social Research Institute. He has dedicated his many years of research in socioeconomic inequality, and has over 75 peer-reviewed publications in this area.

Ruth is the Professor of Cognitive Science in the School of Psychology and the Institute of Neuroscience and former Vice Provost of Trinity. Her research expertise is in the cognitive science of human thinking, including experimental and computational investigations of reasoning and imaginative thought. She has written several books including ‘The Rational Imagination: How People Create Alternatives to Reality’ published by MIT press, as well as over 100 articles in journals such as the Annual Review of Psychology, Trends in Cognitive Sciences, Psychological Review and many more. 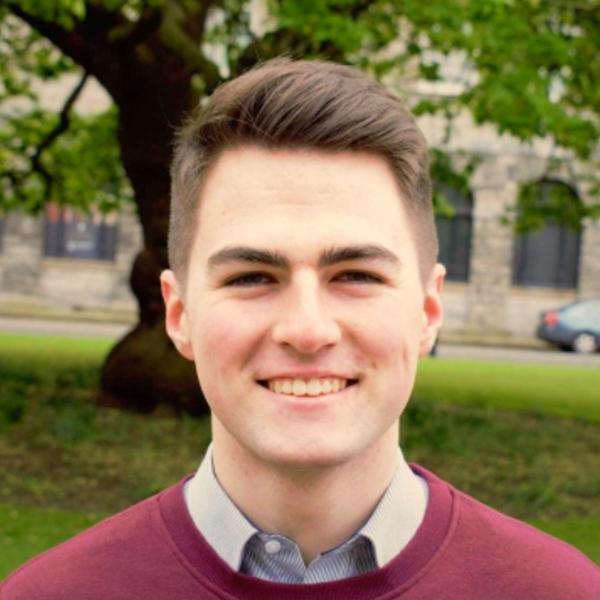