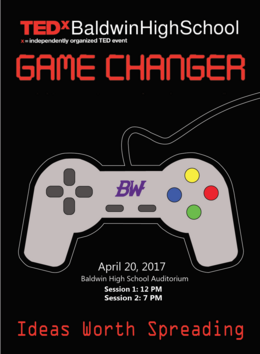 TEDxBaldwinHighSchool, now in its third year, seeks to explore what ideas are currently "changing the game". This year's event features several teachers and administrators, but focuses primarily on the new and exciting perspective of our students. Come check it out!

Speaker 4: Hannah Shore (There's A Light At The End of The Tunnel)

Speaker 1: Alana Martucci (Positive Inspiration & Where To Find Them)

Speaker 2: Corina Pittman (A Raccoon, A Sunburn, and A Priceless Experience)

Speaker 8: Natalie Weida (The Chronicles of An Ex-Perfectionist)

Alana Martucci is 17 years old and a senior at Baldwin High School. She enjoys teaching and practicing yoga and overall bettering her physical and spiritual well-being. Alana began practicing yoga when she was 14 and began instructing yoga when she was 16. Along with yoga, hoop dancing is a major part of her life. She plans to pursue a career in performing hoop dance, instructing yoga and soon after she graduates a career in massage therapy.

Cheri Foote is a Baldwin High School art teacher and a sponsor of the National Art Honor Society. She is happily married to Adam Foote, also a teacher, and has two beautiful young daughters. From all outward appearances, you might assume she is living an ideal life. She has a great career, a loving family, and her days are filled with fun activities, family trips, and so much more. It may be surprising to find that behind the sunshine a dark cloud is looming.

Claire is a junior at Baldwin High School and spends a significant amount of her time working with the school’s Special Olympics Club. She participates in many activities, but working with Special Olympics has led her to pursue a career in Pediatric Occupational Therapy or Special Education. She also holds an executive board position within the club. She is a part of the Marching Band as well as the Indoor Color Guard team as well. Outside of school she has become dedicated to making people happy and encouraging people to do new things. After high school, she plans on attending a four year university to further her academics.

Corina Pittman is a Junior at Baldwin High School. Corina has been an avid enthusiast for all things involving the outdoors since a very young age. She spends her summers working at GSWPA camps, and runs on the BHS Cross Country and Track team. She is passionate about helping more children enjoy the outdoors, and making a positive change in our world, both immediate and long-term.

Emma Dowker is a senior at Baldwin High School this year. She will be attending Temple University in the fall to double major in Political Science and Global Studies. Frustrated with the (lack of) stigma surrounding climate change and humanity's disconnection with the Earth, Emma offers positive and sustainable solutions to our environmentally destructive habits.

Erin is a senior at Baldwin High school this year. She is apart of the Women's Volleyball team, Swimming and Diving team, and Slow-Pitch softball team. Outside of school, she is the captain of her club volleyball team and participates in club diving as well. For the past four years she has participated in the Pittsburgh Marathon as a relay and half marathon runner. Alongside athletics, Erin is the secretary of the senior class, and a member of the National Honor's Society. Her plans after graduation include attending a four-year university to further her academics.

Hannah Shore is a senior at Baldwin High School. She plans on attending Bradford School to study Graphic Design in September of this year. Her art has been an outlet for her own emotions. For a long time, bullying caused challenges with her mental state. She wants to tell her story to show how no one is too far gone. There's always a light at the end of the tunnel. Some just cannot see it yet.

Jackson Brandwene is a sophomore at Baldwin High School and plays soccer and football. He plans on playing soccer in college, hopefully, Division 1. In the future, he would like to earn a degree in criminal/forensic psychology and study the behavior of criminals to hopefully make a difference in the world.

Father, son, brother, teacher, administrator, former Marine are just a few roles that Assistant Principal Jonathan Peebles holds in his day-to-day life. Mr. Jonathan Peebles served in the Marine Corps from 1990- 1994 as an infantry squad leaders. He was deployed overseas twice and served in Desert Shield and Desert Storm. He taught high school social studies for seven years and has been an administrator for the past ten years. He is also a father of three amazing children and is active in mentoring students in the Young Marines program.

Megan Costantino is about to graduate from Baldwin High School. She plans to further her education at Penn State University, to study Chemistry with a minor in Psychology, Megan aspires to partake in cancer research one day. Megan is well known for her leadership and service throughout the community and is also a member of The National Honors Society and Gifted Program, she challenges herself by taking five advanced classes. Megan is a Senior Class Officer, four-year lacrosse player, and was also a member of the tennis team. She volunteers through her church, local food pantry, and at school events. She has always appeared as a bright and flamboyant person, however, Megan feels she lives two separate lives, by constantly fighting to hide her personal flaws. Ultimately, Megan plans to leave you with a feeling of hope as she shares her story and outlook on the often called "unanswered question", suicide.

Michaela is a senior at Baldwin High School. She is a member of the French Club, Math League, Student Council, and is president of the daVincian Society. She is attending Duquesne University in the fall with a major in biology and admittance in their pre-medicine and health professional program.

Michelle has been teaching in the Baldwin-Whitehall School District for seven years. In addition to her love for teaching and the theater, Michelle enjoys staying active through running and kickboxing, traveling, enjoying the culture of her hometown Pittsburgh, volunteering, and spending time with her family and friends. Michelle has found passion in animal advocacy; in January she volunteered to transport a baby goat with disabilities on a fifteen hour journey across the country to her new forever home at the Goats of Anarchy. She plans to become further involved with animal rights in the future. Michelle would like to thank the following non-profit sanctuaries for inspiring today's talk: Goats of Anarchy, Rancho Relaxo, and Hope Haven

Mikayla is a sophomore at Baldwin High School with a desire to help others. She runs an organization called Mik's Wish in which she has written three original musicals to fundraise money for Make-A-Wish. She has raised over $27,000 with a goal of $50,000 by the time she graduates. In Mikayla's free time, she writes and participates in the fall play and spring musical at school. She wishes to study film after she graduates and become a screenwriter.

Minnie Jones is a senior at Baldwin High School who plans on attending the University of Pittsburgh at Johnstown after graduating to major in Civil Engineering. From her award-winning short story she wrote in 6th grade, to the numerous productions she has been apart of, Minnie continues to find creative ways to express herself. Along with being the drama club secretary, Minnie enjoys playing the violin for her school orchestra, taking shop classes, and teaching 4 year olds in the school’s preschool program. Outside of school, Minnie loves volunteering at the Whitehall library and helps run the daycare at her church along with directing the children's’ dance team there. During her 13 years as a part of the Baldwin Whitehall School district, Minnie has been a part of many different things inside and outside of school that make her who she is today.

Mitch Holmes is a sophomore at Baldwin High School. Mitchell is actively involved in the Youth Organization of DeMolay. Mitch is the Youth Director for the Key Man Conference as well as the Representative for the Pittsburgh Area. Mitch does work around the state of PA to inspire others to provide service to their community. Mitch plans on going to Duquesne University to study Computer Managements Systems.

Natalie Weida is a senior at Baldwin High School. Academically driven and passionate about science, she plans to pursue Biomedical Engineering at Case Western Reserve University in 2018 after a Gap Year. She is also highly creative, participating in dance classes, musical theater, and art. She is Co-President of the National Honor Society and spends a significant amount of time volunteering in the community each year. Big changes are in store as she prepares to share her story of personal growth and success through recovery, yoga, and advocacy.

Olivia Altavilla is a senior at Baldwin High School. She has competed on multiple sports teams, the varsity swim team being the most noted. She is a four-year letter winner, three time WPIAL qualifier, and a one-time MVP. When she is not at practice, she has contributed to multiple clubs, the most worthy being the National Honor Society, and the National Art Honor Society. As her senior year progressed, Olivia was subconsciously creating the moments that would later alter who she would be once she graduated. She grew up as a blue collar kid, but had a drive to escape that class distinction. Through writing a novel she realized what was always true about herself. Olivia will discuss the different stages that occur during a game-changing moment through her own personal experiences and will challenge you to find your novel in life.

Robert is a junior at Baldwin High School who can always be found with a smile on his face. He grew up as a very shy child, which comes as a surprise to many of his peers, but now participates in multiple performing arts activities that bring out his love of connecting with audiences. He is a current member of the National Honors Society and has recently participated in PMEA Chorus festivals. After high school, Robert wishes to either continue his career in musical theatre or study in pharmacology. 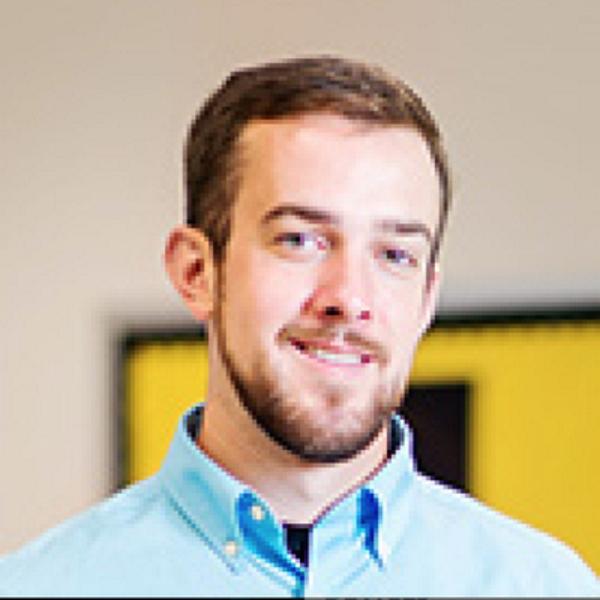