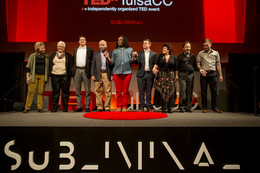 Subliminal messages are everywhere. TEDxTulsaCC seeks to find them. Change the way you see the world.

TEDxTulsaCC is a multi-sensory, multi-disciplinary event with a goal to bring Tulsa’s best ideas to our community and the world. Attendees will experience enlightening talks, a shape-shifting art exhibition, the world premier of new choral work, surprise musical performances, and more. But the audience won’t simply observe – they will participate in fun exercises and a free exchange of ideas that will leave them feeling inspired and empowered to act on their own great ideas.

TEDxTulsaCC is an invitation-only event limited to 100 attendees by our TEDx license. Everyone can watch TEDxTulsaCC live via simulcast on the web, and the public is welcome to experience Subliminal: an Art Exhibition, at the Center for Creativity during the month of May. Please call (918) 595-7339 during office hours to plan your visit.

Daniel Regan is a fourth-generation Tulsan whose family has strong roots in entrepreneurial innovation and community involvement. He is Executive Vice President and Director of Leasing for downtown Tulsa’s largest commercial property owner, on the forefront of the ever-changing landscape of the community’s Deco District. As the chairman of the board for Tulsa’s Young Professionals, one of the largest groups of its kind in the nation, Daniel led a campaign to reinvigorate civic engagement amongst the millennial demographic. As a result, in 2016 Tulsa saw some of the largest increases in young voter turnout in decades.

David Kendrick, MD, MPH, FACP chairs the Department of Medical Informatics at the University of Oklahoma's School of Community Medicine and serves the OU Health Sciences Center as the Assistant Provost for Strategic Planning. He is also the principal investigator and CEO of MyHealth Access Network, Oklahoma's non-profit health information network. Both personally and professionally, he has seen how medical records can affect one's health.

Drew Diamond is the Executive Director of the Jewish Federation of Tulsa and the Sherwin Miller Museum of Jewish Art. He joined the Federation staff in 2010, but he began his career as an employee of the Federal Bureau of Investigation. Later, he entered the U.S. Army and became an agent in the Army Criminal Investigations Command. Diamond served on the Tulsa Police Department for 22 years.

Ellen Stackable is the Executive Director of Poetic Justice, an organization that teaches creative writing to incarcerated women. Ellen Stackable has taught English and writing for over fifteen years at Tulsa School of Arts and Sciences. While pursuing her master’s degree in Liberal Studies at the University of Oklahoma, she became aware of the issue of mass incarceration of women in Oklahoma. In March of 2014, she helped start Poetic Justice, working with incarcerated women at the Tulsa County Jail. Poetic Justice classes give a voice to the voiceless and empower women to change as they engage in self-reflective, therapeutic writing.

George Louthan is a self-proclaimed maker, hacker, and computer geek. He is interested in how things work, and he puts this curiosity to use in his day job as Director of the Tandy Supercomputing Center in Tulsa, OK. He has degrees in Computer Science and Mathematics, and 6 National Information Assurance Training Standards certificates from the Committee on National Security Systems. Before moving to high-performance computing, he worked in information security and research software.

Glenna Cooper is Assistant Professor and Department Chair for American Sign Language Education, English As Second Language, and World Language at Tulsa Community College. She was one of a few Deaf nationally certified instructors to provide Deaf Culture training to emergency responders in 40 states. Although she is Deaf, ASL was not her first language. Instead, she learned to speak and lipread English first which presented many challenges.

John Calvin Abney is a Tulsa-based songwriter who has played over 400 shows in the past two and a half years, performing his critically acclaimed debut album “Better Luck” and two singles, “Empty Candles” and “Vice Versa Suite.” He has performed as a sideman for acts such as Samantha Crain, John Moreland, and The Damn Quails. At the end of 2016, he released another full length record, “Far Cries And Close Calls,” on Horton Records. He continues to tour and perform on his own accord, under the banner of rock and roll, to move forevermore toward freedom and happiness.

Kim Doner is an award-winning children’s book writer and illustrator, including two New York Times bestsellers. A self-proclaimed chameleon, the story behind the subject dictates the medium Doner uses, whether it’s watercolor, ink, markers or oils. She uses experimentation in her artistic process to add excitement and boldness. Her illustrations have traveled internationally and sold in galleries.

Nash McQuarters is a well-known face in local Tulsa high schools as the Senior Admission Counselor at Tulsa Community College. Over the last five years, he has promoted TCC's free college tuition program, Tulsa Achieves, to thousands of high school students. He is a Tulsa Native and a graduate of Oklahoma State University with a Bachelor of Arts in Sociology.

Will Kaufman is one of the world's leading authorities on Woody Guthrie. He is a singer, multi-instrumentalist and Professor of American Literature and Culture at the University of Central Lancashire in England. He has written numerous books in American Studies, and he has performed "live documentaries" about Woody Guthrie at hundreds of venues on both sides of the Atlantic.