Our theme for this year is “The Future of Education: Courage and Curiosity”. To that end, we’re bringing together educators, parents, and professionals from a wide-range of backgrounds to share their personal vision for reshaping how education works in our community.

Brent Hayden is a retired Olympic Bronze Medallist and World Champion swimmer who represented Team Canada for a decade. He is the current Canadian record holder in six events and is regarded as the fastest swimmer in Canadian history. Brent's message is that success results from learning through failure.

Brett is a grade 12 student at Brookswood Secondary in Langley, British Columbia. As a young child, he was diagnosed with Asperger's syndrome and struggled with understanding social cues, relationships and school. He discovered music at the age of 7 and through the support of family members and others has developed confidence in himself and his talent. Brett has performed in the musicals Urinetown, The Addams Family and Footloose, plays the guitar and writes his own songs. He dreams of being a professional musician one day. Music has guided him through life to this point and his future is promising!

"As a clinical counselor, stress and resilience coach, Bruce is committed to supporting people in their efforts to resist the impact of stress and trauma and to thrive in the midst of life. He provides individual and group experiences for developing personal resilience and for learning to manage stress. Also having extensive experience as a trauma and critical incident responder, he supports people dealing with critical incidents in workplaces within many different sectors, including corrections, health care, education, business and industry.

Gabe Penner is a speaker, relational architect, singer, songwriter and musician from Langley BC. Together with his brothers, Josh and Levi, their band, Her Brothers, released their debut album, SHE, in 2015 that addressed the value of mutual respect between the genders and that men have an opportunity to stand up and challenge society to a higher standard in the way we think about and treat the women in our world. As a band they have toured schools and venues across Western Canada and were featured speakers at the 2015 Vancouver We Day speaking to over 20,000 teens.

Jefferson is a 10 years old fifth grader that attends Langley Fundamental Elementary school. His hobbies range from sports to academics and music. He first began to learn how to play the violin at around the age of 7. He discovered his ability to learn music the way he does language- naturally and easily by listening. During free time he likes to strum short songs on his ukulele. Besides music, Jefferson also has a love for sports and anything that is outdoorsy, active or athletic. He enjoys playing on his soccer team and hanging out with his friends and family. Jefferson is very grateful to have the opportunity to be a part of TEDxLangleyED.

John Harris is a software developer and a technology teacher at Simonds U-Connect School in Langley, B.C. His research interests include exploring the potential of simulations, robotics and virtual reality for learning as well as establishing best practices for using digital media to enhance learning. His students' software and robotics projects have garnered many international awards, including an excellence in design award from NASA, two international Thinkquest awards, and have been positively reviewed by such international media as USA Today, BBC, AOL, Google and Yahoo. He was awarded both the Prime Minister’s and Premier’s “Awards for Teaching Excellence."

Katherine Mulski is currently working as a bilingual Instructional Coach for the Langley School District. Her passion for working with teachers includes work with SFU as an Inservice Faculty Associate teaching Graduate Diploma in Education programs. She has taught in Trinidad/ Tobago and South Korea and advocates for purposeful leveraging of technology and fun in the classroom. Katherine is studying as an EdD candidate and hopes to focus her research around self-study and the impact of multi-teaching roles in Education. You can find her fly-fishing or enjoying walks with her husband and English Bulldog, Nora. Her ability to 'Mulski'task is always a work in progress.

Kathleen Forsythe has had a long career in innovation in education in BC over the past 40 years . She was the founding Executive Director of BCs Knowledge Network, a leading educator in learning and technology and a founder of the SelfDesign Learning Community, one of BC’s largest distributed learning schools. She was awarded the Prime Minister’s Award for teaching excellence in 2006. For over thirty years she has been speaking and writing of the need for imagination as a fundament of education and the importance of creativity in learning. Kathleen lives her own creativity as a poet, writer and artist. A charismatic and inspiring speaker, her wisdom is needed at this time.

Wiyé.nox ‐ the man of sound. A name earned and gifted from the Elders of Kwantlen First Nation and his hereditary chief Marilyn Gabriel, for his extensive background in music and capabilities of public speaking. Part of my goal and what I currently do for work full time is let people know about the success, pride and passion of my Kwantlen family and what has been accomplished through our community.

Like her students, Sandy Balascak did not fit into mainstream schools. She ultimately became a teacher to help students like herself - misunderstood students who fall through the cracks. Sandy has worked in other professions gaining invaluable life experience, notably on the Downtown Eastside of Vancouver, and even in stand-up comedy. She studied several after-degree subjects, choosing a Masters in Interdisciplinary Studies to focus on online learning and innovative leadership. She now studies counselling. Sandy is most proud of seeing how far her ACE students have come, how happy and proud they are of their own achievements, and their belief in themselves and their futures.

Savanna Flakes is a Special Education Instructional Specialist and Inclusion Consultant. She has served as an Adjunct Professor, Manager of Special Education Professional Learning, Master Educator, Technology Integration Specialist and an Inclusion Instructional Specialist. Flakes has been featured internationally as a Keynote Speaker on topics such as Literacy, Differentiation, Co-teaching, Universal Design for Learning, and Inclusion. As CEO of Inclusion for a Better Future LLC, she has worked with various organizations around the world to facilitate school leader and teacher trainings on Inclusive Practices. Flakes has received numerous honors and awards for her work on behalf of students with disabilities and in education. She authors an “Inclusion Corner” column for MultiBriefs, in which she shares instructional strategies with teachers, parents, and students. Savanna is a Possibilitarian. She believes “Inclusion Matters.”

As an active participant in community development & mentorship for over 20 years, currently advocating & mediating between families and her residing School District, Suzanne is guiding families with children on the Autism Spectrum, ADHD & Anxiety. Having worked in the health care industry, employed within the higher educational institutes, ran for School Trustee & is a public speaker she offers a milieu of insight as a Counselor. Through her advocacy on fair inclusion, Suzanne has positioned herself as a strong collaborator to create bridges between those who need a voice & those who are willing to hear.

Tim Stephenson has been a high school teacher for 24 years. He has his M.Ed. from the University of Portland. His main area of teaching is chemistry, but his main area of study is astronomy and climate science. Tim believes that today’s students are the true agents of change that we need to inform and train to bridge the gap between how we have powered our lives and how we need to power our lives. Tim raises questions in class and then asks the students to dig deeper and find out more. Common class discussions involve alternate sources of energy, climate change, becoming interplanetary, the search for ET life and the history of our understanding of space. Away from school, Tim is married with four kids. He likes to run and hike and has coached hockey for 20 years. Tim loves to be by the ocean.

Truepayna Moo arrived in Canada when she was 9 years old with her family in 2007. They were resettled in Langley with a large group of other Government Assisted Refugees. She was born in a refugee camp in Thailand, after her parents fled violence in Karen state in the mid-1990s. She has many memories of growing up in the refugee camp. Truepayna is graduated from Grade 12 at Langley Secondary school. In school Truepayna is exploring issues of social justice and considering her options for post-secondary school. Her dream is to pursue education related to international development and continue to help refugees and other in need. 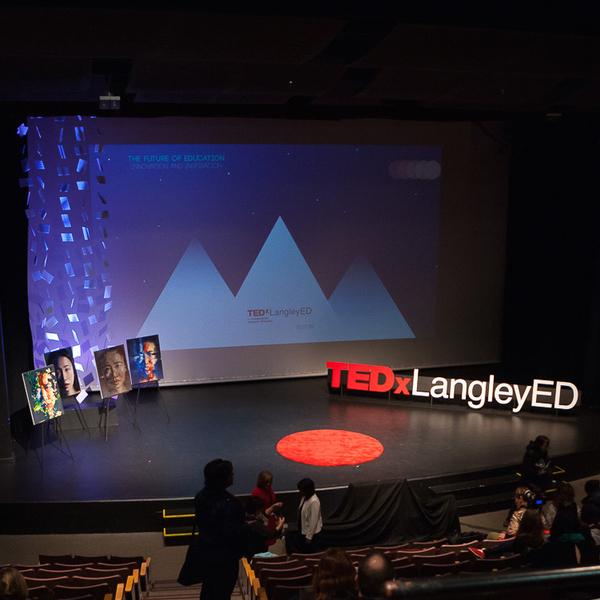