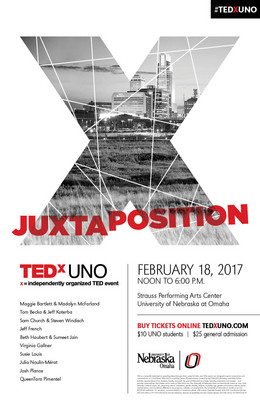 The theme of the event this year is "Juxtaposition." We will be highlighting ideas that present two or more seemingly contradictory or different aspects into a cohesive, interesting story. Imagine talks where two people are tackling one issue from different perspectives such as terrorism, disease, and politics.

Beth Haubert found her way to Omaha from Ohio via the US Air Force, where she was an airborne cryptologic linguist. Now she is a software engineer at Flywheel. Sumeet Jain was a web developer in California for a decade before moving to Omaha to help found Big Wheel Brigade and Omaha Code School. Beth and Sumeet have been married for two years, during which their lives have been simultaneously enriched and challenged by the differences in their cultures and family traditions. Every part of their relationship is influenced by living apart from where their families live in California and Ohio–and by navigating the differences between their own values, Indian principles, and Christian morals.

Jeff French has been a member of the faculty at the University of Nebraska at Omaha since 1982 and the Varner Professor of Biology and Psychology since 2000. His research interests focus on how behavior influenced by hormones and how those same hormones can be affected by social interactions. Dr. French works primarily with marmosets, a primate with biological and social traits that closely mirror those of humans, to determine the evolution of behavioral patterns and how they impact features of bonding, aggression, selflessness and cooperation. Collaborations with students and researchers from across the world have also allowed French to do similar research on birds, fish, rodents and other primate species.

Since joining the Omaha World-Herald in 1989, Jeff Koterba has been a finalist for Editorial Cartoonist of the Year from the National Cartoonists Society—2002—and has twice placed second in the National Headliner Awards—2000 and 2012. In 2009, 2010, 2013, and 2016, he won first place for editorial cartooning in the Great Plains Journalism Awards. His cartoons are distributed through King Features Syndicate to 400 newspapers nationwide, and have appeared in such publications as The New York Times, Chicago Sun-Times, San Diego Union-Tribune, The Atlanta Journal-Constitution, USA Today, and on CNN. In 2010, two of Koterba’s original drawings flew aboard space shuttle Discovery.

﻿Josh Planos is a full-time journalist who is currently employed by KETV. His writing has been featured by publications such as The Washington Post, The Wall Street Journal, Sports Illustrated, The Atlantic, and the The Guardian.

A triple American, Canadian and French citizen, Julia Noulin-Mérat is the principal designer at Noulin-Mérat Studio, an intrepid NYC production design firm that specializes in Theater, Film & TV, with an emphasis in Opera and immersive site specific theatre. In addition to her work as Associate Producer for Boston Lyric Opera, Ms. Noulin-Mérat is Director of Design and Production for Guerilla Opera and resident set designer for Attic Theater in New York. Last season, Ms. Noulin-Mérat earned ArtsImpulse’s Award Best Boston Set Design for her production of The Rape of Lucretia and Best Opera for Gallo. The 2016-17 Season started with her designing La Traviata for Pittsburgh Opera and Peter Pan in a 50,000 feet immersive show in Beijing. Ms. Noulin-Mérat returns to Opera Omaha in February to design Mozart’s Così fan tutte before heading back to Boston Lyric Opera for Stravinsky’s The Rake’s Progress.

Madalyn McFarland is a second year master’s degree student in biology at the University of Nebraska at Omaha. After earning her bachelor's degree at UNO in biotechnology, she began her thesis work in the laboratory of Dr. Paul Davis, on the parasite Toxoplasma gondii. Her work focuses on the development of experimental compounds into novel antiparasitic drug treatments.

Maggie Bartlett is a first year Immunology, Pathology and Infectious Disease doctoral student at the University of Nebraska at Omaha Medical Center (UNMC) and was selected as the Chancellor’s Outstanding Incoming Ph.D. Student. She is a UNO alumni with a Bachelor’s of Science in Biotechnology where she was an INBRE scholar. During her time at UNO, her focus was development and testing of novel Toxoplasma gondii vaccines. Maggie will be the first Ph.D. candidate to pursue her dissertation at the United States Army Medical Research Institute for infectious diseases (USAMRIID) through a new pipeline program with UNMC. Her focus will be host-response immunomics, specifically of the immune repertoire to filoviruses, alpha viruses, and corresponding vaccines.

QueenTara Pimentel is a 2nd year graduate teaching assistant in the School of Communication. She teaches debate and assists with coaching the UNO MavForensics team. Her research interests largely center around topics concerning Black Feminist Thought, rhetoric, and hegemonic power relations. Upon graduation in May, QueenTara is interested in pursuing a career in acting, continuing to teach, and eventually pursuing a PhD.

Beth Haubert found her way to Omaha from Ohio via the US Air Force, where she was an airborne cryptologic linguist. Now she is a software engineer at Flywheel. Sumeet Jain was a web developer in California for a decade before moving to Omaha to help found Big Wheel Brigade and Omaha Code School. Beth and Sumeet have been married for two years, during which their lives have been simultaneously enriched and challenged by the differences in their cultures and family traditions. Every part of their relationship is influenced by living apart from where their families live in California and Ohio–and by navigating the differences between their own values, Indian principles, and Christian morals.

Susie Louis is the Founder and Director of Conservation Fusion, an international NGO with a mission to: Educate to build and strengthen our World. Her work spans the globe with a focus on the island of Madagascar. Susie has launched multiple community based education programs and at four sites in rural Madagascar and in Senegal. The Conservation Fusion team is exploring new ways to educate, empowering communities through hands on, inquiry-based education resulting in action to promote the balance between people and endangered species and ecosystems. In 2014, she constructed the Dream School, followed by a teacher’s quarters, school library, lunch program and girls club. Passionate about teamwork and collaborative efforts, her body of work is the result of connections with diverse partners to include zoos, universities, non-profits, schools, engineers and government agencies to promote solutions to conservation challenges.

Tom Becka can be seen every night during Omaha’s Fox 42 News at 9 giving his unique views on what’s happening in Omaha and the rest of the world. His Becka’s Beat can be humorous, poignant, serious, or whimsical. But they are always informative, entertaining and on point. Becka’s Beat is also available on demand at Fox42 KPTM.com. He is also a nationally-recognized radio talk show host currently heard Monday-Friday on legendary Kansas City radio station KCMO. Formerly of KFAB and KOIL in Omaha, Tom has been named one of the Top 100 talk show hosts in America ten times by Talkers magazine and one of the Top 25 local hosts in America by Newsmax magazine. He has also been a fill-in host for nationally-syndicated radio shows and on WLS in Chicago and many others. He performed with such greats as Jerry Seinfeld, Lewis Black, Sam Kinnison, Darrel Hammond, Drew Carey

Virginia Gallner started performing her original music in local coffeehouses and restaurants at the age of fifteen. Over the course of several years, she has expanded her repertoire with blues standards, medieval folk songs, and gypsy jazz guitar. Her musical journey has led her to perform at many venues in Omaha and beyond, from original music to interpretations of British, Celtic and Appalachian songs, incorporating the folklore and literature from her studies. In 2016, she was selected as a participant for the Silkroad Ensemble's Global Musician Workshop, a project initiated by Yo-Yo Ma bringing together musicians from around the world to perform traditional music in innovative ways. Virginia is working on her degree in International Studies and Religious Studies at the University of Nebraska at Omaha, with minors in Ancient Mediterranean and Medieval Studies. 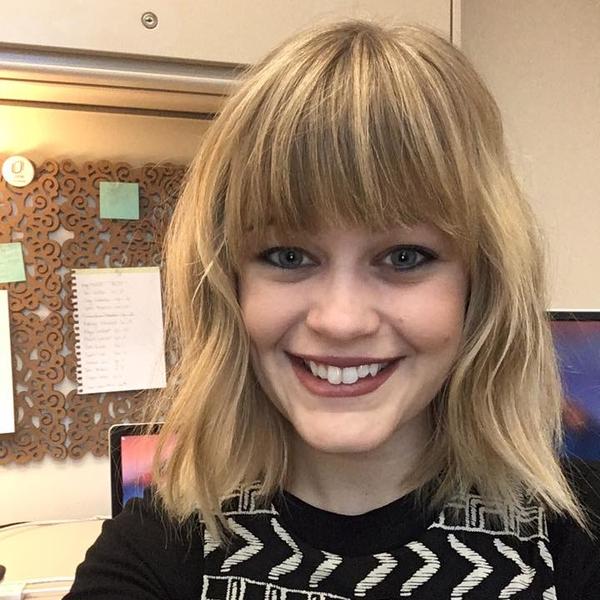