Theme: It's about time. 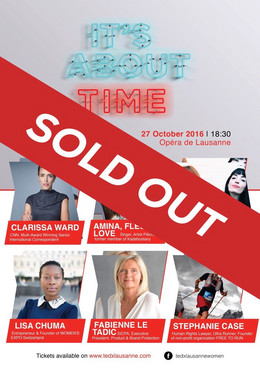 TEDxLausanneWomen will take place on Thursday, 27th of October 2016 within the Opéra de Lausanne before a live audience. This is the second edition for TEDxLausanneWomen. It has been planned to coincide with TEDWomen 2016, which will be streamed live from Monterey, California. The three hour programme on the theme of It's about time will blend local and international talks with an opportunity to meet challenging and interesting women from around the world.

The theme of TEDWomen and TEDxLausanneWomen 2016 is: It’s About Time. Time is personal.
We all have the same amount of time — 24 hours a day and yet most of us feel we never have enough. Even with today’s latest inventions, technology, science, we can’t make time or stop time — or can we?
Come explore time zones, time travel, time outs and times together. We will explore the conventions and challenges of time. We will ask the hard questions. Because isn't it about time: To find long-term solutions to climate change, poverty, immigration, violence, race, gender and economic inequities?
To lead for different outcomes?To challenge our "time-saving" technologies?To pay full attention and be fully present for ourselves as well as others?

Amina is a singer, songwriter, performer and activist. The world recognizes her as the previous singer of the song castle in the snow from her previous band kadebostany. After experiencing injustice and series of discrediting events, she decided to leave the band to start her solo career as Flèche Love. In order to support artists like her, together with her sister, Soraya, she created a new platform of experimentation called Swood, a community that allow women to speak up when their environment doesn't. The aim of Swood is to question status quo and make hidden dynamics, visible.

Clarissa Ward is a multi-award winning senior international correspondent. For more than a decade Ward has reported from front lines across the world from Syria, Iraq, Afghanistan and Yemen to Georgia -- during the Russian incursion in 2008 -- and Ukraine. She has won multiple awards for her reporting including a George Foster Peabody Award, an Alfred I. duPont-Columbia Award, four Emmy Awards, an Edward R. Murrow Award for distinguished journalism, as well as honors from the Radio and Television Correspondents' Association. This year she distinguished herself with her in-depth, high-risk reporting from Syria. Today her experience brings her to stress out the importance of having compassion and empathy for victims of war a world away.

Fabienne Le Tadic , Executive President at SICPA has more than 20 years of experience in international business management position. Her track record in leading complex change management projects in very different companies and coutries such as Auchan, Nestlé, Constellium (ex-Alcan). Passionate by leadership and people management her area of interest and practice is to set up the conditions to achieving success and building strong organizations in particularly heavy in technology environments.

Franc Bouroullec is a Switzerland-based artist who has for the past 20 years sought, through the simple stroke of his paintbrush, to purify the subject of his paintings in a quest to touch upon their very essence. This world-renowned artist is regularly coveted across a variety of industries, including fashion (creating t-shirts for Tommy Hilfiger), painting promotional previews for internationally acclaimed films (such as Love Actually and Quantum of Solace), painting ‘live’ at events (ranging from royal birthdays to global events), to name but a few. Today, exposing his workshop creations to the public eye is a way of telling a story. At the same time Franck Bouroullec continues to explore other art forms to ensure that his association with a specific technique does not limit the workings of his imagination.

Kassidy Brown & Allison Rapson We are the XX

Founders of feminist media company, We are the XX

Kassidy Brown and Allison Rapson are two women with impressive and extensive backgrounds in communications and a shared passion for amplifying the female voice. Together they are creating content that exposes the world we live in - a world that is, in fact, 50% female and unapologetically so. Through their feminist media company, We are the XX, Brown and Rapson are capturing the powerful truth of how women live and socialize. By activating their global network of emboldened women from around the world, Brown and Rapson have created a brand that sits at the forefront of the future; always leading their audience to what will happen next.

Lisa Chuma is not a stereotype or a demographic - and she's making sure other women don't become one either. As the Founder & CEO of the Women's Expo Switzerland, the married mother of 3 connects thousands of women each year to find new products & services for their personal & professional lives, acquire new knowledge & expand their network. Lisa's passion for women's advocacy is borne from a difficult childhood in Zimbabwe, one of the poorest countries in the world today. Lisa's mother was a single mother and a victim of domestic violence. However, in spite of the odds, Lisa has become a successful businesswoman, role model and compassionate leader. These experiences have driven Lisa to help and inspire women to tell their stories so they can connect authentically and build meaningful connections.

Sisters Melati and Isabel are on a mission to ban plastic bags in Bali. Inspired by similar measures in other parts of the world, Melati (15) and Isabel (13) launched the social initiative Bye Bye Plastic Bags in 2013, which has become a well known international movement of inspiration, youth empowerment, and of course, saying no to plastic bags. The two sisters, who frequent the environmentally minded Green School along with a crew of like-minded motivated kids, continue to ask the question: How can they make a difference in the world?

Human rights lawyer, ultrarunner and the President and Founder of Free to Run

Stephanie is a human rights lawyer, accomplished ultrarunner and the President and Founder of Free to Run, a charity that uses sport to empower women and girls from conflict-affected areas. From a shipping container in Afghanistan to a tent in South Sudan, Stephanie has lived in some of the most dangerous and difficult areas on earth, providing direct assistance to vulnerable populations in need. She witnessed first-hand the harmful effects of conflict on communities, particularly for females, and the restrictions that women and girls faced from participating in public life. As an athlete herself, she saw an avenue for sports to help address some of these basic issues of inequality. Stephanie recently moved to Geneva after working for two years in Gaza, Palestine. She currently works for the UN Office of the High Commissioner for Human Rights and serves as President of Free to Run in a volunteer capacity. 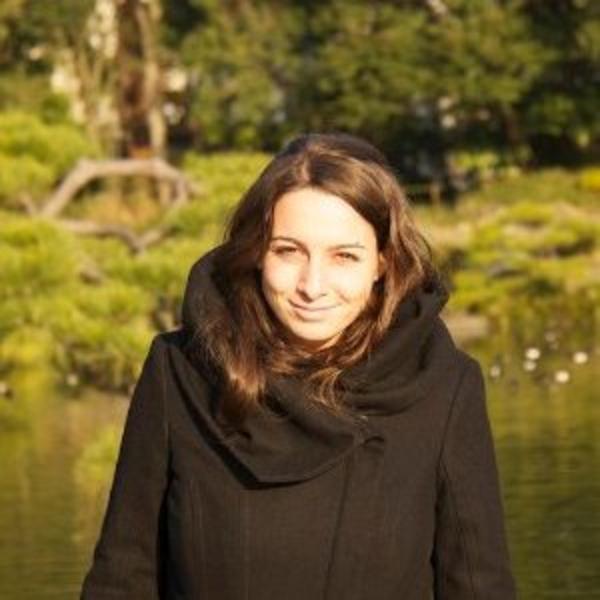 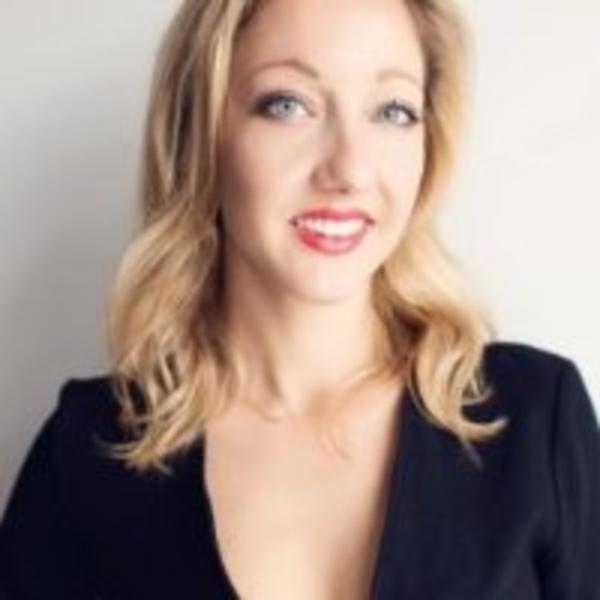