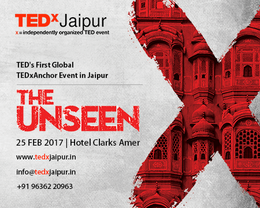 Some of the most powerful thinkers and doers of the world as TEDxJaipur Speakers have delighted, taught, inspired, shaken, and ennobled millions with their incredible thinking.They have always tried to tackle some of the society's toughest questions; and answering them with innovation, enterprise and enduring optimism.

TEDxJaipur is home to ideas that inspire people to change their lives, their communities and ultimately, their world. Every day, we hear from people who have been positively affected by TEDx, whose lives have been made better by access to a broad spectrum of ideas, and some who have been galvanized to create a better life for others as a result.

Anurag is a freelance music producer/composer based in Mumbai, India. Owing to his father – Promod Shanker’s A&R background, he was amidst musicians since his school days and hence got into record production soon after college.Since 2006, He co-runs a production firm called Music Design Workshop which has been working and producing music for various record labels and independent clients. As a composer, he has been creating original music for TV, Web, Film as well has his bands and other artistes for a while now. Composition has been his ultimate goal and he continues to gain knowledge about the same from various musicians and gurus. Anurag plays guitar and writes music with a bunch of bands namely – Slow Down Clown, Caeser’s Palace, Last Remaining Light and Bombay Acoustic People – wherein he enjoys working and playing differently and moving forward with every record, song and note.

With plenty of real world problem to solve in developing nations; it is important to solve the problem and not necessarily, create another solution. Arun is a consultant to the International Committee of the Red Cross, MIT D Lab Scale Up Fellow and the founder to Rise Design Labs, a social enterprise developing cost effective, high quality devices for the physically challenged in developing nations. Arun is also partnering with multiple worldwide organizations to indigenize and test devices to cater to the masses in developing nations. Arun quit his PhD in Mechanical engineering at Purdue University, USA in advanced robotics to pursue developing and implementing appropriate technology. Prior to which, he was a researcher at University of California, Berkeley developing wearable exoskeletal suits to help the paralyzed people walk. He completed his Masters in Mechanical Engineering from Columbia University, New York. Arun finds an immense sense of priceless gratification when he sees the

Harpreet is an independent musician from India. He composes his own songs and music and includes the writings of more contemporary poets. In a sense, Harpreet’s music is bridge, an offering to his generation, to walk the path to a deeper life, to perspectives that can be transformative. Harpreet has been composing poetry of Hindi and Punjabi, some known and some unknown poets, including Baba Bulleh Shah, Avatar Singh ‘Pash’, Suryakant Tripathi ‘Nirala to name a few. Recently he composed his first Urdu song, a poem by Faiz Ahmad Faiz- Bol ke lab Azaad hain tere. His single called GHAH, a poem by revolutionary punjabi poet, Paash, from 1970s is getting a response from the audiences and critics. This trained vocalist and self taught guitarist, has been traveling to all over India with his songs and stories for last 7 years. In 2015, he was signed by Yash Raj Films for his song ‘Kutte’. It was the promotional song for their movie ‘Titli’, a Dibaker Banerjee production. He launched his

Harsh Songra is the 20 year old founder of My Child App, an app that screens developmental disorders in 10 seconds. He is also the founder of We, Included. which is a platform to share stories of differently abled people. His parents were unable to identify problems in their son’s development for several years, due to lack of awareness and limited access to information about such diseases. He has now made it his life’s mission to make sure that other families don’t go through the same ordeal. Harsh’s app was lauded by Sheryl Sandberg on her fb post in August 2015, He is also a Forbes 30 under 30 in India and a TEDxGateway2015 speaker.

Jagdeep S. Chhokar was a professor (teacher, trainer, researcher, and advisor) of Management and Organisational Behaviour at the Indian Institute of Management, Ahmedabad, from 1985 till November 2006, when he retired after reaching the mandatory age of superannuation. He has taught in several countries including Australia, France, Japan, and the US. His research has appeared in several international journals. He has also contributed chapters to edited books and has written several teaching cases. His writing has also appeared in the business and popular press. He is the lead editor of a volume titled Culture and leadership across the world: The GLOBE Book of in-depth studies of 25 societies, brought out by the Global Leadership and Organizational Behavior Effectiveness (GLOBE) Research Programme. He is also a citizen-activist for improving democracy and governance in the country; a bird watcher and conservationist; and a trained lawyer. He is one of the founding members of Associati

Laxmi, a girl like everyone, young and beautiful with a dream in her eyes, The passion of singing who aced many talent hunt competitions and was waiting for a call from ‘Indian Idol’. Laxmi was acid attacked in Khan Market, Delhi 2005 by a mid-aged man ho was pursuing her for marriage. She was in her young age when she used to learn dancing and was completing her education. In 2006 she filed a PIL on punishments against perpetrators of acid violence and regulation on sale of acid in India. The PIL got judgment in her favor in 2013 and the amendments in the constitutions were framed as Laxmi Act. Since then she has continued her journey to eradicate acid violence in India. After being awarded as International Women of Courage by the First Lady of US Mrs. Michelle Obama, today she is the face of any and every unprivileged acid attack surviving women in India.

He is a retired Indian army officer. He is from the Jammu and Kashmir Rifles. GaganDeep Bakshi is veteran of many skirmishes on the Line of Control and of counter-terrorist operations in Jammu and Kashmir and Punjab, he was awarded the Vishisht Seva Medal for commanding a battalion in operations in Kargil. Later, Major General G.D Bakshi ji commanded a brigade in counter-terror operations in the rugged mountains of Kishtwar, for which he was awarded the Sena Medal for distinguished service. He subsequently commanded the Romeo Force during intensive counter-terrorist operations in the Rajouri-Punch Districts of Jammu and Kashmir and succeeded in pacifying the area. He has served two tenures at the Directorate General of Military Operations and was the first BGS (IW) at HQ Northern Command (India), where he dealt with Information Warfare and Psychological Operations.

Mallika is the CEO and co-founder of the world’s first Museum to remember the Partition of India. The Partition Museum has opened its doors at the Town Hall in Amritsar, and in a mere 8 weeks since opening has received over 25,000 visitors. The Museum aims to be a memorial to all those millions impacted in the largest migration in human history, as well as, a comprehensive archive on the Partition. Prior to this, Mallika was the India Country Lead for Health Systems Design at the Bill and Melinda Gates Foundation in Delhi, where she anchored the Foundation’s work to bring increased accountability, access, quality of care, and financial risk protection through cross-cutting health system approaches. Before joining the Foundation, Mallika was an Engagement Manager at McKinsey & Company in the Healthcare practice in Washington D.C. She served clients across the healthcare value chain, including large hospital systems and supply chain companies in healthcare. Mallika has also worked with t

Manisha Koirala is well known for her acting prowess and her ethereal looks which easily pull at audience heartstrings. However, what many may not know about this Nepalese beauty is her quiet conﬁdence and graceful strength which have enabled her rise to success in Bollywood and work in critically acclaimed movies with directors such as Sanjay Leela Bhansali, Vidhu Vinod Chopra, Subhash Ghai and Mani Ratnam. Manisha also had her fair share of ups and downs, but it was the diagnosis of cancer in 2012 which caused her to pause and introspect her life deeply. Perhaps it was this very introspection which gave Manisha new goals and motivated her to rise and shine through trying times.

Namit Das is an Indian film, television and theatre actor known for his roles in Wake Up Sid, Ghanchakkar and Sumit Sambhal Lega. He belongs to a family of musicians and is also a trained singer who took classical music training from his father Chandan Dass and Bhavdeep Jaipurwale. Though Namit is popular for his onscreen roles, music still remains his passion. His recently released first album with composer Anurag Shanker has fiver original tracks and has received good reviews from music lovers

A simple girl belonging to Punjab, Nidhi has always been an athlete and was a star NCC cadet and a Karate Champion. Nidhi joined Jet Airways on 1st August 1996 as an Air hostess and has received many appreciations during these twenty years of her tenure. Nidhi was one of the survivors of the Brussels Airport Terror Attack in 2016. Nidhi displayed exemplary courage during her struggle to come to terms with her injuries and the unwanted exposure. Despite sustaining more than 20% burns, multiple fractures, few crushed bones, ruptured eardrums and being in a state of induced coma for 23 days, she survived. Doctors are amazed at her strength and positive attitude. She still has a hollow heel, has undergone skin grafts and a bone graft is pending & firmly believes that the bone will grow itself.

Shreiya Chowdhary (1991, India) is a programmer and creative technologist working out of New Delhi. She comes from a diverse professional background which ranges from marketing to copywriting, with a side of sports (having represented the country in Women’s Skeet Shotgun events over the world). Now she explores possibilities with various micro-controllers to create fun yet functional devices out of inanimate objects. With humour and her background in copywriting, she hopes to give life to all insentient entities with the help of programming and embedded electronics.

Vikas Agnihotri is a Digital Storyteller & heads multiple divisions for Google in India. 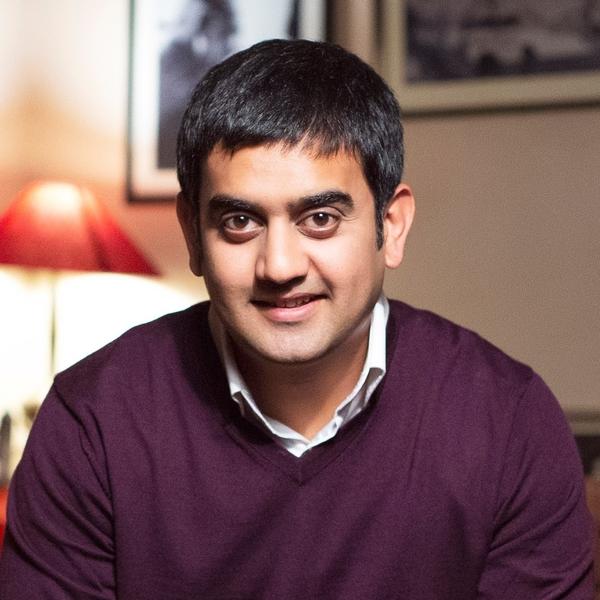