The theme for TEDxDharavi revolves around Reimagine, Redefine:
Reimagine Dharavi - for the immense potential and productivity that this resource-constrained area has been able to generate for years, not just in India but across countries.
And Redefine Dharavi - with the new breed of denizens who, inspite all odds, intend to make a significant change and difference for their fellow-inhabitants and for the country at large.

At TEDxDharavi, we aspire and make an attempt to invite such famous innovators and speakers, from different walks of life, to uncover the amazing ideas, the impact it had and their inspirational journey that originates from the trailing lanes of Dharavi.

This 81-year-'young' (that's how he calls himself) National Award winning author, besides being an artist, cartoonist, journalist, screenwriter and environmentalist, is all-out to save every drop of water in and across Mumbai. Over the years, his one-man NGO - Drop Dead Foundation, has saved more than 1.5 million litres of water from being wasted, just by searching and fixing leaky taps, plugged absolutely free of charge. Aabid, will take you through his interesting journey of saving every possible drop of water.

They hate being labelled. They love breaking stereotypes. They prefer calling themselves the SlumGods. Witness their raw energy as Aakash and his team weave magic and share their incredible journey. Not to miss, as the team performs an amazing hip-hop piece for the audience at TEDxDharavi

Ajay Talwar took up astrophotography in 1987 during a night when the Moon was occulting the Pleiades. Since then he has continued photographing the skies passionately. He is the most prolific transient sky events photographer in India. One of his early accomplishments was to produce an exhibition of all Messier objects along with three other Indian astrophotographers. Ajay travels with all his astrophotography gear to all across India, especially the Himalayas, places like high altitude Indian Astronomical Observatory at Hanle, Ladakh, high peaks in Himachal Pradesh. His interest to dark skies also take him to the white desert in the northwestern India. Ajay is blurring the sharp divide between scientific astrophotography and artistic photo-journalism.

Akshai Abraham & his team are redefining the boundaries of education through Project KHEL, a non-profit initiative in Lucknow that is using sports and interactive play techniques to provide innovative educational and leadership development opportunities to children from disadvantaged backgrounds. Listen to him on how education should go beyond the classroom and how play based programmes can change the course of lives.

Avi is effectively the most qualified Instructor in the country today. APPI International’s only Master Instructor in India, Avi is a Qualified and Certified Tandem Instructor, Acro Trainer, XC (Cross Country) Instructor and SIV Instructor.He is also a Qualified & Certified Paramotoring Instructor with APPI PPG, Switzerland. Adventurer and a pioneer, he founded Kamshet as the ideal site for training and flying to promote the sport of Paragliding in India. He named the first site he discovered after the friendly farmer Shelar he first met there. Shelar kaka fondly remembers him as the man who brought flying to Kamshet.

An ardent social activist at heart and founding member of the Mohalla Committee that was instrumental in maintaining communal harmony. He has fought for the human and legal rights of nomadic tribes in Dharavi and is still closely working with several NGOs.

A contemporary teacher and a trained Bharatanatyam choreographer, this charismatic personality believes that dance is sacred and the essence of his dance is deepened by spirituality and respect for its tradition and aesthetics. And trust us when we say this, he is not the typical Bharatnatyam dancer! Watch as he shows his amazing talent to the audience at TEDxDharavi.

Divyanshu is India’s first solo blind paraglider, trekker, mountaineer, scuba diver, marathoner, and first blind pillion cyclist to ride from Manali to Khardung La and is the founder of Adventure Beyond Barriers Foundation. He is also a clinical psychologist, two-time entrepreneur, IT guy, public speaker.

Scientist and researcher in plastic and other recyclable materials

Also known as the 'Plastic Man', this Chemistry professor is transforming discarded plastic waste into paved streets in India. Meet the man as he unravels the mystery behind this inspiring innovation.

The power of youth is unstoppable if directed & harnessed correctly. Eashan, a young enthusiast who established The Youth Foundation and now has over 1500 volunteers in 14 different countries, all working on various projects to make the world a better place and to empower all sorts of young people from different backgrounds. All this at the age of 18.

Harsh Valechha has done it all. From working with Big 4's to helping create tropical forests in India and Haiti; from successfully conducting a global experiment on unconditional giving to starting a fully off-grid self-sustainable farm. And at the same time, Harsh claims to have done nothing.

Having worked for more than 40 years in addressing to the concerns of slums dwellers, Padma Shri Jockin Arputham has long been an inspirational figure helping slum and shack residents to stand up for their rights, find new homes, and plot a way out of urban poverty. He has been instrumental in partnering with the government to look into issues in Dharavi and the other slums in Mumbai. He is the Founder of the National Slum Dwellers Federation (NSDF), the President of Slum Dwellers International (SDI) and a Ramon Magsaysay award winner for Peace and International Understanding.

Roshini is a 17 year old girl from Dharavi who has developed an innovative mobile app so that her friends who do not go to school can learn. She believes that every girl in Dharavi should be given an opportunity to go to school and realize their true potential. She is inspiration to all the girls in her community. 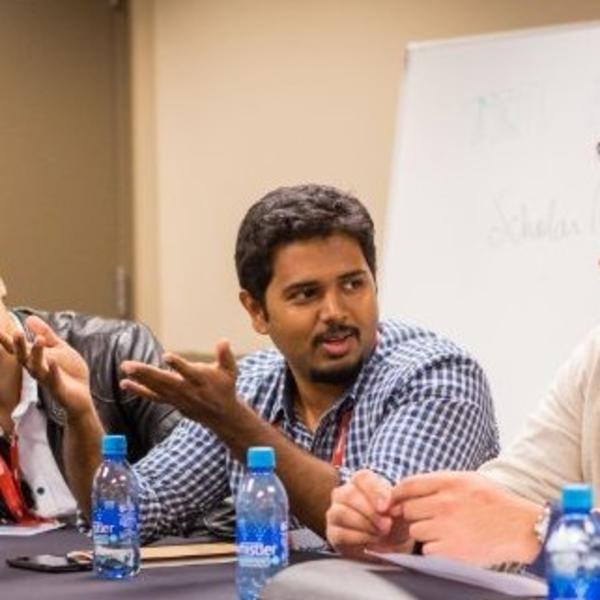