Theme: Break it and Remake it 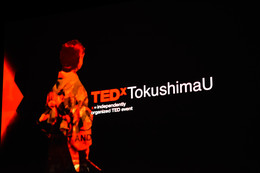 TEDxTokushimaU plays the role of a platform that connects and reconstructs diverse ideas beyond existing boundaries and creates a new system that can change shared ideas into concrete action. The event will incite thought into the sustainability of Tokushima, a regional city in Japan, and how we can spread new ideas born in TEDxTokushimaU in relation to "the local" environment.We have invited 8 speakers who are breaking stereotypes and remaking things according to their own values. Through their talks and activities, participants will be able to share ideas and inspire each other so that brand new ideas can be created.

Becoming No Kill has become an expressed goal for Japan as a nation. In 2006, Susan Mercer and Hitoshi Tojo created NPO HEART Tokushima and they, along with staff and volunteers, have been working since to create an environment locally that is free from suffering and abuse for dogs and cats. In an area that once had the worst rate in the nation for gassing unwanted animals, Susan and Hitoshi have worked together with the local authorities to greatly improve the situation for animals. HEART Tokushima was also one of the rescue organizations that played a major role in caring for animals displaced by the Great East Japan Earthquake.

It has been 33 years since the opening of Kondo Medical Clinic and 15 years since we started the first Hospice care and Palliative care in Tokushima in 2002. In that time, Dr. Kondo has been teaching about living wills in super-aging society which we are now entering. He is expanding his medical care supporting patients and their family, mainly centered around the palliative care concerning sarcopenia and frailty. What he has found through his 15-year experience of palliative care is that a “heal and be healed, love and be loved” relationship between patients, family, and staff

The Awa Dance Festival is one of the three bon dance festivals in Japan. Gejyaraku is a famous dancing group affiliated with the Awa Dance Association. They have been annually participating in the festival and attracting local audience as well as visitors with their traditional Awa dance style. While they have been succeeding the dance style, they have also been trying to it over 40 years. As a result, they have developed a dancing style more appealing to audience. You cannot miss their performance on stage with dynamic men dancing style and elegant women dancing style. Gejyaraku has been actively promoting Awadance. For example, they appeared in the movie, Bizan, which was directed by a famous Japanese singer (Masashi Sada). They have also been traveling and promoting Awa Dance to the world.

Ms.Ueda is the CEO of Classy.co.ltd, which provides integrated daily life support services and support systems for the community. The company’s main office is located in Tokushima City. Ms.Ueda started this business to gain a sense of fulfillment, using what she describes as her 3 advantages: maternal experience, English skill, and her life experience as a woman. With those strengths, she began to turn unpaid work such as childcare, housekeeping, and home assistance care into paid work. As an entrepreneur representing Tokushima, Ms.Ueda is using a female perspective to work towards creating an environment where men an women in the community can live more comfortably. Currently, she is working on industrialization of her integrated life support service.

Currently, Lance Kita is and English lecturer at Tokushima Bunri University. For the last 11 years, her has called Tokushima his home. One of his passions is food, and after being introduced to many of Tokushima's restaurants by his Japanese friends, he wanted other foreigners in the community to have the same experience. For many of them, the language barriers and fears of the unknown can make a step through an eatery's door a daunting task. So the 'Mystery Dinner' was born, a fun yet educational way to share knowledge and help foreigners discover new places and flavors.

Mini Future City is a project idea designed to allow children to create a “future city” on their own. In this experiment, money and people move primarily by trust. Some of the things which come up from the children's activities are questions such as, “What do we use money for?” and ”What are rules for?” Of course, there is no single right answer. In the society of the future, which frequently changes circumstances, we found that children need skills which we often forgot about and skills we never expected.

Takechi Minami was recognized as professional surfer by JPSA in 2011. She is the first recognized professional female surfer from Tokushima prefecture. Now she participates in many competitions both internationally and at home in Japan. She also established the surfing club at Tokushima university and has been serving as the club director. On top of that, she works as Patagonia’s ambassador and the first area ambassador of Anan city, activities which we can appreciate as supporting local revitalization, She is going to talk here about what she has gained from her experience as a whole and from her life history within the world of surfing.

Mini Future City is a project idea designed to allow children to create a “future city” on their own. In this experiment, money and people move primarily by trust. Some of the things which come up from the children's activities are questions such as, “What do we use money for?” and ”What are rules for?” Of course, there is no single right answer. In the society of the future, which frequently changes circumstances, we found that children need skills which we often forgot about and skills we never expected.

Since her childhood, Ms.Hosotani has expressed herself using her body through classical ballet, apparatus gymnastics, dance and other forms of movement. Within this world of expression, she was introduced to “capoeira” which is a traditional combative sport in Brazil. After practicing a lot in Brazil, now she is a teacher at Shikoku University, researching and performing capoeira as physical expression of culture in anthropology. What is the attraction of capoeira and what did she find so anthropologically valuable about it? Her performance and talk will explore these questions.