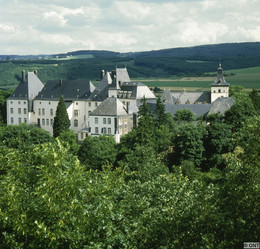 Our TEDx event will be hosted in the wonderful campus of the United Business Institutes: Chateau de Wiltz, in the north of Luxembourg. In contrast to our local and small event, our speakers are global and incredible. Like our last two events, we encourage attendees from all over Europe to participate and engage each other after some fabulous and thought-provoking talks and performances. We will finish this year's event with an epic talk & performance by one of the most remarkable, talented and young people our team has ever had the honour to meet. Come and see yourself who we are talking about... you all know her and have most definitely heard her ;)

A Ronin is a warrior without a master. It has the ultimate freedom which this Brussels, Belgium-based collective embraces. Free to exercise their passion, their cultural diversity enhances their multi-disciplinary performance of photography, tricking, dancing, singing, video...

Anik is the CEO and founder of multiple companies, having received awards and recognition by reputable and global publications. Anik is now dedicating his life to his dreams of providing education to those who are not currently receiving that birth-right.

Two years ago, Craig threw in the towel at his desk job and decided to venture into the unknown. Since that moment he has travelled through 55 countries, went scuba diving between tectonic plates in Iceland, base jumping in France, trekking to Mt. Everest Base Camp, volunteering in Africa and started his own business in New York city. His YouTube video “Guy Quits Job To High Five the World" became a sensation, and inspired many people to do the same.

Elisabeth Daniel left the trodden path to become a singer-songwriter. For a number of years now, she has been volunteering in Antwerp's Red Light District, where she connects with ladies working in window prostitution.

16 year-old Emma Bale's voice is something to behold. The delicate, vulnerable depth of sound contrasted with a strength of tone that has been compared by the industry to Adele, Birdy and Gabrielle Aplin.

Lars Sudman has been a CFO and a strategy manager at leading organisations. He is now a corporate advisor, university lecturer and explorer of what makes innovation and change possible.

Dr. Mcayla Sarno is a certified E.M.D.R. Specialist, Author and Mentor who teaches people all over the world how to turn dreams into realities. Her success is benchmarked by the many lives she has inspired by her personal story and courageous efforts to overcome negative beliefs.

Rokhaya Diallo is a French journalist, writer and filmmaker, widely recognized for her work in favor of racial, gender and religious equality. She is a TV host and a pundit on several French and international networks. In 2007, she co-founded the INDIVISIBLES, whose principal goal is to use humor to tackle the spread of racism in the media. One of the ways the association tries to reach its objective using humour is by awarding through The ” Y’A BON AWARDS” ceremony the “best” racist statements made by French public figures each year. She published several books and graphic novels on identity and gender and has also directed several documentaries including the award winning Steps To Liberty.

Sebastien Bellin is a multi-cultural, multi-ethnic, professional basketball player, startup entrepreneur, venture capitalist, dedicated father and loyal husband. Sebastien Bellin travels... a lot. While checking in for a flight, his life changed in an incomprehensible manner.

Thea, an avid fiction writer, photographer and Fulbright Research Scholarship student, comes from a place that is typically unknown to people: Keokuk, Iowa. While traveling, people are often curious how a small town girl ends up in their part of the world. Answering this question at so many different points in her life has allowed Thea to recognize a pattern in the way she takes advantage of opportunities.