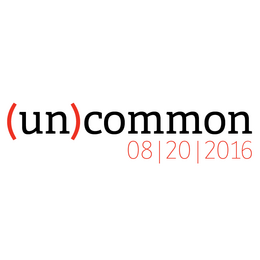 TEDxHickory 2016 is fast approaching! Our fifth year anniversary will be coming to the SALT Block Auditorium Saturday, August 20th, 2016, and we’re more excited than ever. This independently organized event, licensed by TED, will feature a combination of live speakers and TED Talk videos that is sure to elevate the thinking and broaden the perspective of all who participate.

This year’s theme is “(un)common.” But, what is (un)common? To us, it’s all the similarities and differences, however big and small, that makes us who we are. It’s the big ideas that have revolutionized industries. Or the tiniest idea that just leads to others. It’s the seemingly small and innocuous changes that have shaped our way of life. It’s the smallest variations that create uniqueness. It’s how we can be so incredibly similar yet so exceptionally different. It’s how, on paper, Hickory can be perceived as just another American small town – but when you look deeper, you uncover the individual and collective differences that makes us truly unique (just ask any of us what makes Hickory, well, Hickory).

The event will be held from 10am to 4pm, with presenters speaking for no more than 18 minutes each. There will be breaks in-between sessions for discussions on the topics presented.

Those wishing to attend TEDxHickory will need to purchase a ticket from the event’s website (www.TEDxHickory.com). Early Bird Tickets will be $20.00 each (regular tickets will be $30.00), which covers attendance for the full day and a lunch. Space is limited, so those interested are encouraged to purchase their ticket soon.

The TED Conference provides general guidance for the independent TEDx program, but individual TEDx events, including the one being held in Hickory, are self-organized. TEDxHickory has been organized by local members of the community.

Blake is co-founder of the personal development company, Motivational Millennial, and co-host of the Motivational Millennial Podcast. He serves as Chief Innovation Officer for the benefit corporation, Simple Giving Inc., and he runs a hip-hop motivational speaking business as President of Decrypt Productions. Blake was the recipient of the Marshall Scholarship, one of the most competitive postgraduate awards in the world, which he used to complete his Master's and Ph.D. on hip-hop and global youth cultures at the University of Kent in England.

While spending 18 years in federal prison for making the poor choice as a 20 year old to engage in the felonious act of robbing a bank, Eugune gained clarity while having a paradigm shift on life. In doing so, he turned his life around to help at-risk youth avoid the pitfalls all common in urban environments. In 2002 Eugene Brown started the Big Chair Chess Club, a non-for profit organization which helped get a group of teenagers off the streets using the game of chess. Eugene Brown’s insight on the urban subculture and the impact it has on lives of youth is unique and profound. Eugene Brown is offering to share his experiences, insights, and potential solutions to addressing the behaviors of youth as they relate to the urban subculture, and the limited choices that many of them face.

Kimberly Bost is a home and lifestyle coach, helping people to create environments that let them thrive. Formerly a designer in New York City, she has been in Hickory for 16 years where she lives with her husband, son and beloved pets. Kim earned a BS in Apparel Design from the University of Delaware, and an AAS in Design from the Fashion Institute of Technology in NYC. She has traveled globally creating visions and product lines for brands such as Cole Haan, Liz Claiborne, Reebok and Ellen Tracy. She is also a certified professional life coach, and a Huffington Post contributor. You can learn more about her work and subscribe to her blog at HighVibeHome.com.

Leslie Dula McKesson is an educational administrator, author, and speaker who creates generative, authentic, and transitional spaces for the consideration of race and racism. From an early age, Leslie has been compelled to work toward a more just and egalitarian world. A few years ago she published a family memoir recounting the story of the relationship between a slave and slave-owner who were her ancestors, and quickly discovered that their story provided a backdrop for the valuable consideration of the role of race and racism in America. In a society divided along many lines, her goal is to enlighten, encourage, and challenge every person to continually expand his or her capacity for greater humanitarianism.

Mark Story has Bachelors Degree in Business Administration and a Masters in Instructional Technology from Appalachian State University. Prior to entering the field of education, he spent more than 15 years developing software for the retail and hospitality industries. He began his career the field of education as a Network Engineering and AP Computer Science teacher. Following his initial role in the face-to-face classroom, he moved on to teach for the North Carolina Virtual Public School and later became Head of Web Technologies at Catawba Valley Community College. Today, Mark is the Career Technical Education Director for Catawba County Schools.

Melinda Herzog is a native Texan and a graduate of Trinity University, San Antonio, Texas with a Bachelor of Arts in both History and Studio Art. She also was a Graduate Fellow in Ibero-American History and American History Trans-Mississippi at Southern Methodist University, Dallas, Texas and received a Masters of Arts in Museum Administration with a specialty in Historic Preservation and Interpretation from Texas Tech University, Lubbock, Texas. Her career included museum administration, restoration and interpretation of historic properties in Alabama, Texas, New Jersey, and Virginia before moving to North Carolina in 2006 to assume the directorship of the Catawba County Historical Association where she served until 2015. She currently holds the directorship of the Iredell Museums in Statesville, NC where she recently designed and installed an exhibition entitled The Mummy Treasure of Al Faiyum featuring a 22nd Dynasty Egyptian Mummy, the only mummy exhibited in North Carolina.

Paige Palmer is a historical researcher, writer and public speaker. Her love for formal speaking combined with her addiction to history has earned her invitations to speak to a variety of groups, including the Southern Maryland Civil War Roundtable at Ford’s Theatre in Washington DC, and at the 2016 Surratt Society Conference in Maryland, where she delivered the keynote address. Paige also spoke in Pittsburgh, Pennsylvania at a 2016 TEDx event. She continues addressing Civil War Roundtables and audiences at private resorts in her native state of Pennsylvania. Maintaining a GPA of 4.0, she plans to attend college and major in history. She recently completed writing her first book, a captivating historical fiction, with plans to publish. Paige loves the writing style of Ernest Hemingway, has an appreciation for art, studies martial arts and is a first degree black belt.

As Catawba Valley Community College professor and CVCC Historian in Residence with the Historical Association of Catawba County, Richard Eller delves into the people and events of the past, seeking new insights to their relevance for our lives. Currently, he is spearheading a cross-disciplinary examination of the 1944 Polio Epidemic with a forthcoming book and documentary. His recent work includes Speedbird: The History of Piedmont Airlines, which aired on UNC-TV. Eller coauthored The American Road, an American history text. His next project is to bring the history of Catawba County to the stage (in abridged form).

Scott Owens holds degrees from Ohio University, UNC Charlotte, and UNC Greensboro. He teaches at Lenoir Rhyne University, edits Wild Goose Poetry Review, owns and operates Taste Full Beans Coffeehouse and Gallery and coordinates Poetry Hickory. Thinking About the Next Big Bang in the Galaxy at the Edge of Town is his 13th collection of poetry. His work has received awards from the Academy of American Poets, the Pushcart Prize Anthology, the Next Generation/Indie Lit Awards, the NC Writers Network, the NC Poetry Society, and the Poetry Society of SC. He has been featured on The Writer’s Almanac 5 times, and his articles about poetry have been featured in Poet’s Market four times.

Twyla is an entrepreneur with business interests in wine and civic technology. Her professional background and areas of creative expertise include consulting, strategic management, and spatial analysis. She currently is a partner in three Catawba County businesses: Carolina Vines, Catawba Farms and Second Nature Technology. Twyla’s educational credentials include bachelor and masters degrees from the University of North Carolina system, Harvard Kennedy School of Government and the Wine & Spirit Educational Trust, London. Be on the look out for her future ventures for civic good as well as other venues of public imbibement!