TEDxTrousdale is the premiere TED licensed event at the University of Southern California. TEDxTrousdale serves to quench the curiosities and expand the interests of all USC students. Regardless of major, age or background, we intend to enable all students to become aware of what their peers have to share and offer, in terms of experience, insight and advice.

On Saturday, April 16th, one hundred Trojans will come together for four hours to listen to USC students share their passions, projects and experiences with their peers. TEDxTrousdale hopes to build a sense of community across campus to share interdisciplinary knowledge and showcase the talents of our student leaders. We hope this event will start a dialogue between all speakers and attendees, connecting varying communities under a single vision.

Trousdale is more than just a main street that stretches from one end of USC’s campus to the other; it is also a place and resource for students to learn, share and grow. Trousdale is traditionally used as a place for student organizations to congregate and promote their causes. Its prime location in the heart of campus makes it a frequent home to the University-wide involvement fair, multiple career fairs and USG election campaigning, amongst others. It is the street that all students, one way or another, find themselves on, but most importantly, it is the street that brings the USC community together.

Why "Make Your Mark"?

USC students are constantly striving to create impact and make a difference in their communities. This year at TEDxTrousdale 2016, we wanted to showcase USC students who truly embody this quality and give them the opportunity to share their take on what it means to "make your mark" on the world.

Alexa Trujillo, 22, is a dreamer and a doer from Dallas, TX. She’s on the track for a career in business marketing at Deloitte after graduating with Honors from the University of Southern California’s Marshall School of Business in May. From representing the university as a USC Song Girl, to being an active member of a Pan-Hellenic sorority, to starting the USC chapter of I AM THAT GIRL, and mentoring 8th grade girls in WYSE (Women and Youth Supporting Each other), she has made her mark on the lives of many people by believing in herself and empowering others to also believe in who they are.

Since her poetry blog, Underage Voices, gained an international following, Ariel has advocated to give voices to the unheard. Her work has been celebrated by the Huffington Post, Tommy Talks, USC Visions and Voices, Scholastic, USC SARSA, and DormRoom Television. Ariel discusses personal experiences to address public issues, including domestic violence, mental health, anti-semitism, and female empowerment. She is currently a member of Say Word, Southern California’s poetry slam team, and will represent the region at national finals this summer. When she is not on tour across Los Angeles, Ariel studies Writing for Screen & Television at USC’s School of Cinematic Arts on a full scholarship and declares the superiority of New York bagels.

Aura Gilham is a first year law student at USC Gould. She graduated from University of California, Santa Barbara with a B.A. in economics in two years. She has written various articles about economics and stock market analysis that have been published in an economics newspaper, Global Economic Intersection. Her future goals include practicing in big law and doing pro bono work with animal rights. She currently works with Dogs Without Borders, a local animal rescue, and spends as much time as possible with her two dogs. Aura also currently serves as the Ninth Circuit Governor for the American Bar Association and the national associate for the the ABA Committee on Securitization and Structured Finance. She loves working in law, studying tax systems, kickboxing, and reading.

Chris is a producer at BuzzFeed Video, and YouTuber for his personal channel, OneWingedChris. He is passionate about making content about animated shows, games, race, gender, and LGBT identity. Chris has produced and edited various BuzzFeed hits such as Native Americans Try "Indian" Halloween Costumes, 9 Questions Gay People Have For Straight People, and Weird Things Gay/Straight BFFs Talk About. His videos have been featured by Good Morning America, Huffington Post, Cosmopolitan, Angry Asian Man, and he was interviewed by Indian Country Today (major Native American news source) for his work to bring Native American's into the race conversation. He is a SoCal native and attended UC Berkeley as a EECS major. He was a proud member of Asian American student theatre group Theatre Rice, which is where a lot of his creativity and confidence was nurtured.

Demontae is a graduate student at the USC Rossier School of Education working on a Master’s degree Postsecondary Administration and Student Affairs. He is an emancipated foster youth and brings awareness of the needs of this community from Los Angeles County and beyond. As a teen, Demontae wrote a book about his experience in foster care, and he has been interviewed by various news outlets. In addition to public speaking and advocacy, he co-founded Break The Boxes, an afterschool program for at-risk high school students that works to help them find their voices within the arts and education. Most of all, Demontae loves to serve and lead. He aspires to pursue his doctoral degree in education to improve resources and services for underserved students.

Katie is an artist entrepreneur, graphic designer, musician, writer, advocate, and activist using her own experiences with disability and chronic illness to encourage individuals and institutions to utilize empathetic design thinking in their actions and interfaces. She is currently working with a team to produce The Crohn’s Moans, a documentary investigating alternative treatment methods for IBDs, is the creative director of Saraswati Water, is the co-founder and subject of a brain retraining trial program for individuals with Neurological Lyme Disease, and is in the process of self-training her Medical Alert and Psychiatric Service Dog, Willa. She is passionate about healing through nutrition and mindfulness and is currently studying NGOs and Social Change and Design Communication at the University of Southern California, where she is a junior.

Student majoring in Communication in the University of Southern California

Kurt Clements is a senior Communication major with a minor in Taking Cool Classes I Couldn’t Have Taken If I Had a Minor. He hails from Canyon Lake, CA where he grew up playing Little League baseball and dominating school spelling bees. A longtime fan of Trojan football, he decided to take his love for USC a step further by becoming a Trojan himself. Since his freshman year, he has tried to join at least one new thing every semester and has been (mostly) successful: he’s written for the Daily Trojan, called baseball games play-by-play for KXSC student radio, and led orientation groups for the past two summers. Currently, Kurt gives tours for the USC Admission Center, volunteers at schools in the community with Troy Camp, and helps local fifth graders write screenplays with Young Storytellers. After graduation, he hopes to stay in Los Angeles and dreams of one day becoming the beat writer for the Los Angeles Angels or Anaheim Ducks (or any other team that will take him).

Singer/Songwriter, Student studying Industrial and Systems Engineering at the University of Southern California

Leo Xia is a singer-songwriter from USC who primarily writes about self-love, Asian-American identity and intersectionality within social issues. Since arriving at USC, he has won awards at a variety of singing and talent competitions on campus such as 1st Place at the USC ISA iVoice Competition 2013, 2nd Place at USC APASA's Got Talent 2015 and more recently 1st Place at the HKSA U852 External Singing Contest 2015, which included contestants from USC, UCI, UCSD and UCLA. Leo also has had the honor of being a guest performer for many events on and off campus including USC Springfest 2014, 626 Night Market, Tuesday Night Cafe and the Family Empowerment Festival (Advancing Justice). He writes to remind himself and his listeners that everyone has a story that deserves to be told and heard. His dream is to use his music to unify people through magnifying the experiences of the commonly overlooked and marginalized.

A proud farm kid from Woodlake, in the heart of Central California, Xavier Hernandez is a senior majoring in Industrial and Systems Engineering. This young man has worked in agriculture nearly his whole life, with his family, as a ranch hand of a large citrus ranch. He is a small town kid at heart but has learned the big city life. Here at USC, in the Viterbi School of Engineering, he has served on executive boards for Engineers Without Borders (EWB), Institute of Industrial Engineers (IIE), and the Society of Hispanic Professional Engineers (SHPE). He is a regional leader for EWB and serves as the Head of Marketing and Social Media for the West Coast Region Steering Committee. He loves giving back so he is currently a mentor for the Center of Engineering Diversity program. Xavier enjoys music and poetry so he raps outside of the classroom. He loves the big picture and has big goals of one day being able to combine engineering, community service, and hip hop all into one dream job. 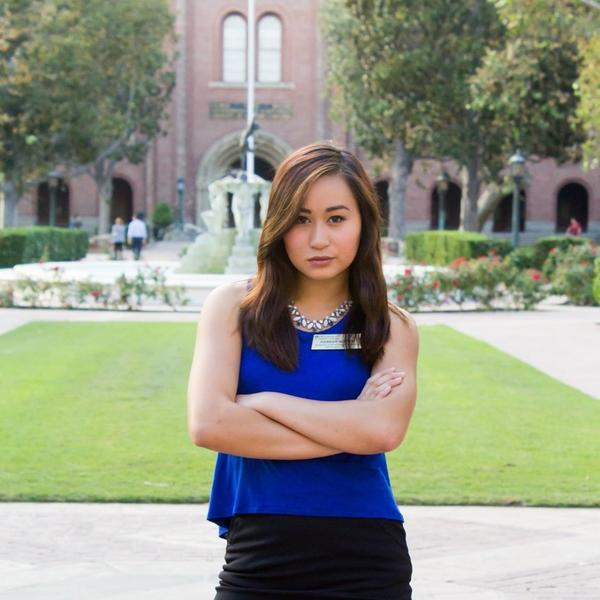