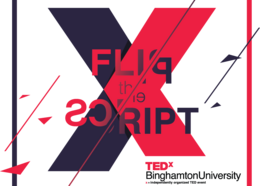 Looking for a common denominator in this year's TEDxBinghamtonUniversity line-up? Our speakers are all changing up the game in their respective fields! Whether it's philanthropic pursuits, bravery of scholarly endeavors, debunking notions of virtual reality, discovery of habitable worlds, increasing accessibility of art, discovering your inner superhero or highlighting political power of hip-hop — our speakers are breaking the boundaries of ordinary!

So this year's overarching theme? All of the TEDxBinghamtonUniversity 2016 speakers are flipping the script!

Come be enlightened, inspired and entertained at TEDxBinghamtonUniversity: Flip the Script!

Curatorial assistant at the MoMA, emerging artist advocate and scholar of the avant-garde

An advocate of emerging artists and scholar of the 20th-century avant-garde, Akili Tommasino is a curatorial assistant in the Department of Painting and Sculpture at The Museum of Modern Art, NY. He earned his master's and bachelor's degrees at Harvard University, where he is conducting doctoral dissertation research on Fernand Léger's efforts to produce socially transformative art through a variety of media during an age violently impacted by the advent of machine technology, research that began during a Fulbright fellowship in France. He is chairman and co-founder of an arts initiative which, under the aegis of New York City-based gifted education program Prep for Prep, seeks to create and expand opportunities for young people from historically disadvantaged backgrounds. He has organized and collaborated on numerous exhibitions at institutions including the Centre Pompidou - Musée national d'art moderne, Paris; and Harvard Art Museums⁄Fogg Museum, Cambridge, Mass.

Journalist, activist and co-founder of the 2004 National Hip-Hop Political Convention

Journalist, activist and national thought leader in the area of hip-hop activism, youth culture and young voter political participation, Bakari Kitwana's commentary has been seen on CNN, Fox News, C-Span and PBS and heard on NPR. He is the executive director of Rap Sessions: Community Dialogues on Hip-Hop, which for the last decade has conducted town hall meetings around the U.S. Also a senior media fellow at the Harvard Law-based think tank, The Jamestown Project, he is authored the bestselling book The Hip-Hop Generation: Young Blacks and the Crisis in African American Culture, which has been adopted as a course book in classrooms at over 100 colleges and universities. Former executive editor of The Source: The magazine of hip-hop music, culture and politics, he has taught at the University of Chicago and co-founded the 2004 National Hip-Hop Political Convention, which brought over 4,000 young people to Newark to create and endorse a political agenda.

Ellen Stofan, chief scientist of NASA, serves as principal advisor to the NASA administrator on the agency's science programs, and science-related strategic planning and investments. Her research has focused on the geology of Venus; Mars; Saturn's moon, Titan; and Earth. Stofan has a bachelor's degree from the College of William and Mary and a PhD from Brown University. She has published extensively, and received many awards and honors including the Presidential Early Career Award for Scientists and Engineers. She is an associate member of the Cassini Mission to Saturn Radar Team, and has proposed a mission to NASA to land a boat on a sea on Titan.

Sophomore Kyrin Pollock, majoring in biomedical engineering, is a member of Enhance VR, a virtual reality-based start-up company established in spring 2015. Since its founding, the company has designed peripheral devices for users to experience motion, complementing their interaction in a virtual world. She is a Zurack Scholar in the School of Management and also dedicates time outside of classes to business and finance. Pollock has served as president of the Freshman Class of 2018. Matthew Gill is a sophomore majoring in electrical engineering, a member Binghamton's track and cross country teams, and co-founder of Enhance VR. His engineering interests and creativity have guided him to designing peripherals and systems to use with today's modern Virtual Reality technology through Enhance VR. He also works in Watson Advising, aiding both students and staff in the Thomas J. Watson School of Engineering and Applied Science.

Philadelphia native Mason Wartman returned to his hometown in 2013, after working as an associate at an equity research company in Manhattan, to start Rosa's Fresh Pizza, a pizza shop modeled after the $1-slice joints he admired in NYC. Opening and managing a pizza shop was a dramatic change from his daily routine of formatting reports and crunching numbers on Wall Street. Several months into operation, a customer asked to pre-purchase a slice of pizza for one of the many homeless people that Rosa's served. Wartman liked the idea and made the pay-it-forward program a prominent part of his business model. Since that first slice, Rosa's now feeds about 100 homeless people each day and has expanded to sell t-shirts, sweatshirts, hats, gloves and socks to support the neighborhood's homeles

Binghamton University alumnus Melissa Frascella '11 has some pretty noteworthy colleagues: five superheroes who know everything there is to know about the human body and hail from planet Mediland. As manager of U.S. accounts at Medikidz, the world's first global kids health brand that uses superheroes and comic books to explain medicine to children, Frascella embraces the opportunity to be part of this growing and exciting team that is changing the landscape for kids' health. At Binghamton, she pursued the Individualized Major Program (IMP). Interested in all things healthcare, communications and economics, but finding no existing culminating opportunity, she challenged the typical major declaration and successfully created her own health communications major. She also holds a master's in public health with a concentration in health policy and management from New York Medical College.

Writer, researcher and scholar of gender and sexuality in the Arab world

Samar Habib is a writer, researcher and scholar. She received her doctorate at 26, and is the author, editor and translator of several seminal books, including Female Homosexuality in the Middle East (2007), Arabo-Islamic Texts on Female Homosexuality (2008); and Islam and Homosexuality (2010). Her literary works include the novel Rughum and Najda (2012). Habib is regularly invited as an expert of international standing to speak at world-leading universities and contributes to long-standing reference works on gender and sexuality in the Arab world. Some publishers of her academic works include E.J. Brill, Oxford University Press and Routledge.