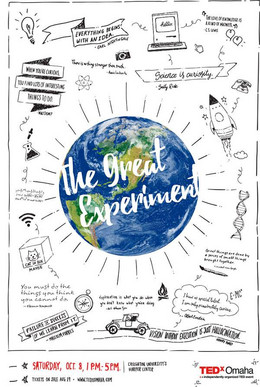 We are driven by a sense of curiosity. It is a natural part of the human mind. Everything that we know about the world or that we created was the result of that curiosity combined with trial and error. The results? Sometimes what we wanted, sometimes not. But at least we tried.

In this context, we have chosen The Great Experiment as the theme of TEDxOmaha 2016. Our drive to know compels us to investigate and look for answers, often with unintended consequences. Get to the core of the unknown with us on October 8.

Ali S. Khan is a former Assistant Surgeon General and current Dean of the College of Public Health at the University of Nebraska Medical Center (UNMC). Khan’s professional career has focused on health security, global health, and emerging infectious diseases. He completed a 23-year career as a senior director at the Centers for Disease Control and Prevention (CDC), which he joined as a disease detective.

April Faith-Slaker is a researcher, attorney, and cellist who embraces an interdisciplinary approach to understanding and communicating about human experiences and social policy. Faith-Slaker has composed and performed with orchestras, chamber music groups, rock bands and theater groups.

In 2006, Marty Wolff was selected to participate in the weight loss reality series on NBC, The Biggest Loser. Wolff has taken his experiences from The Biggest Loser and created a new health club concept called Square One for people who, like him, live with weight-related struggles.

Michael Green is an Assistant Professor at the University of Nebraska Medical Center and a member of the newly constructed Fred and Pamela Buffett Cancer Center. Green obtained his PhD in Molecular Genetics from Griffith University in Australia and completed his post-doctoral training at Harvard Medical School and Stanford University.

Sheila Ireland is a licensed architect and LEED accredited professional. Ireland has more than 15 years of experience as a design and project architect, combined with 10 years in retail visual merchandising and print and television advertising production.

Sofia Jawed-Wessel, PhD, MPH is an Assistant Professor of Public Health and Health Behavior at the University of Nebraska at Omaha and the Assistant Director of the Midland Sexual Health Research Collaborative. Jawed-Wessel has led and collaborated on several projects and manuscripts related to women’s and men’s sexual health including, sexual behaviors during pregnancy, sexual functioning during pregnancy and after childbirth, the use of sexual enhancement products, and condom development and use.