Theme: On the Edge

This event occurred on
May 6, 2016
Portsmouth, New Hampshire
United States 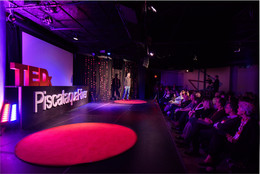 TEDxPiscataquaRiver is a community-organized event where big ideas and challenges that affect our community are openly discussed.

Our mission is to spark conversation and ignite positive community action by bringing together community representatives and showcasing new ideas from local, regional and national voices across diverse disciplines and backgrounds.

Goals:
— to provoke conversation among community leaders and members about the issues our community is facing, and enable those conversations to spread as far as possible;
— to expose attendees to new perspectives and innovative ideas and inspire them to think differently about the many topics discussed;
— to create a compelling call to action for each person attending and watching the event to make a real commitment to enact positive change in their community.

The theme of this 2016 TEDxPiscataquaRiver event is “On the Edge."

The event will also highlighting stories of people "On the Edge" of survival, collected from community and regional organizations who assist low-income populations. These stories will be paired with artwork from local artists inspired by the stories. Local artists who are interested in contributing to this project, or individuals or organizations with stories to submit, should email info@TEDxPiscataquaRiver.com.

Journalist, memoirist, essayist, critic, poet, teacher and geek Ethan Gilsdorf is the author of the award-winning travel memoir investigation Fantasy Freaks and Gaming Geeks: An Epic Quest for Reality Among Role Players, Online Gamers, and Other Dwellers of Imaginary Realms. A former Paris-based food and film critic and travel writer, and now based in Providence, Rhode Island, Gilsdorf covers and comments on pop culture, geek culture, the arts, travel, media and technology, and writes essays for The New York Times, New York Times Book Review, Boston Globe, Boston Magazine, Salon, Wired, Art New England, and WBUR, among dozens of other magazines, newspapers, and websites worldwide. A prize-winning poet, Gilsdorf is also co-founder of Grub Street's Young Adult Writers Program (YAWP), and teaches creative writing at Grub Street, where he serves on the Board of Directors. Follow Ethan’s adventures at ethangilsdorf.com or Twitter @ethanfreak.

Jennifer Dunn is the Director of Psychometrics, Research, Data and Reporting Services at Measured Progress, a not for profit educational assessment company. Her early interest in research, teaching and learning, combined with an aptitude for mathematics, led her to a Ph.D. in psychometrics. Dr. Dunn joined the National Center for Improvement in Educational Assessment, where she gained practical experience about how psychometric principles could be used to inform educational policy decisions and the subsequent ramifications for students, parents and teachers. Drawing on over fifteen years of psychometric experience, Dr. Dunn serves as the primary psychometric advisor for Measured Progress, providing strategic psychometric support through the designs and implementation of research initiatives that inform all aspects of educational assessment.

Lissa has been dancing professionally for 11 years. She received her training from Boston Ballet, Burklyn Ballet Theatre, Central Pennsylvania Youth Ballet and Northeastern Ballet Theatre. She received her BS in Kinesiology: Exercise Science and her BA in Theatre and Dance from the University of New Hampshire. Currently, Lissa is a principal ballerina and teaches for Northeastern Ballet Theatre in Dover and Wolfeboro, NH, as well as for The University of New Hampshire's Ballet Company. Lissa is a rape survivor. In 2014 her ballet coach sexually assaulted her on an international flight and many times at the World Ballet Competition in Romania. Lissa has launched the "Be BRAVE" campaign in the midst of her own legal battle to encourage other sexual assault victims to be brave with her, break their silence and seek justice. Here she's joined by dancers from Northeastern Ballet Theatre performing her choreography, "Be BRAVE", written by her brother, Zachary Silk. Follow at lissacurtis.com.

Maxine Bédat is the co-founder and CEO of Zady, a fashion brand and lifestyle destination creating a transparent and sustainable future for the $1.5 trillion apparel industry. Her background in international law and diplomacy, including serving as a legal clerk for the U.N., led her to found The Bootstrap Project, a non-profit organization that works with entrepreneurs in the developing world. For its work in sustainability, Zady was named one of the world’s “Most Innovative Companies” in retail by Fast Company and its creativity was recognized by Mashable, which called the company “the #1 business rocking content marketing.” Bédat serves on the Council of NationSwell, has spoken at some of the world’s leading conferences, including the WWD Apparel/Retail CEO Summit, and has been regularly featured as an expert by Bloomberg, Forbes, Business of Fashion, CNN and the Huffington Post. Bédat is a graduate of Columbia Law School.

Muskan Kumari is best described as an Exchange student from Pakistan, currently living in New Hampshire, United States on a program called: Kennedy-Lugar Youth Exchange and Study (YES) Abroad program, funded by the Department of State. She was given this scholarship in January 2015 as a result of her rich credentials and outstanding academic performance in her Pakistani education system. She is currently studying at Goffstown High School in southern New Hampshire. She has hosted many of her school's debating competitions and had also been selected as a finalist for a Spelling Bee Competition in the past at her high school. Lately, she has also been involved with Special Olympics as a official Volunteer and had been learning a bunch of new things about the special needs kids and developing good relations with them. She has been educating her community about Pakistan the entire time she has been here, by giving 31 presentations about her country in the form of various visual work.

Randy Armstrong is the Director of the Phillips Exeter Academy West African Drumming Ensemble and North Indian Music Program. Randy is the co-founder of Do’a World Music Ensemble and Unu Mondo and has performed throughout the United States, Canada, Alaska, Belize, India and West Africa. He has appeared on over 40 albums and film scores and has been the recipient of numerous grants from the National Endowment on the Arts and the New England Foundation for the Arts, among others. He has served as an Arts Councilor for the NH State Council on the Arts appointed by two NH Governors and performed a tour in April 2015 in Puerto Rico. Randy's new album, BEYOND BORDERS, is 5 years in the making and features 35 musicians from around world. It is a Global Voyage in Music. The soundtrack for his original, theater & dance score, The Conference of the Birds will have its debut performance in San Francisco in September 2016.

Dr. Robert Eckstein is a Senior Lecturer at the University of New Hampshire for both the Department of Psychology and the Justice Studies Program, where he also serves as the Internship Coordinator for the undergraduate and graduate programs. He is also a the Curriculum Development Specialist for Prevention Innovations Research Center, a research group at the University of New Hampshire that focuses on the prevention of sexual assault, relationship abuse, and stalking. Dr. Eckstein was given the University of New Hampshire’s Excellence in Teaching Award in 2010. He is the co-author of Bringing in the Bystander: A Prevention Workshop for Establishing a Community of Responsibility, an evidence-based, educational program aimed at implementing bystander intervention as a means of preventing violence against women.He is also the co-author of a high school adaptation of Bringing in the Bystander that is currently being evaluated through a federal Center for Disease Control grant.

By day (give or take), Sam Rosen leads brand strategy and marketing for The Atlantic. Previously, he served as vice president of the Strategy & Content practice for DigitasLBi, which he helped form. He’s worked with lots of Fortune 500 brands, like IBM, CVS Health, Allstate, and Netflix, on everything from thought leadership to branded content to community management. By night (or early morning), Sam studies and ponders the intersection of science, spirituality, philosophy, and humanity’s ongoing, and sometimes elusive, search for meaning—while catching as much live jazz as he can.

Skylar Bayer is a fifth year Ph.D. candidate in marine biology in the University of Maine’s School of Marine Science and is based at the Department’s Darling Marine Center in Walpole, Maine. She completed her Bachelors of Science at Brown University, then completed her Masters of Science in Biological Oceanography in the MIT-WHOI Joint Program studying reproduction at deep sea hydrothermal vents and larval behavior. For her Ph.D., she researches the fertilization ecology of the giant sea scallop under the advisement of Dr. Richard Wahle. In 2015 she received an Outstanding Service Award from the College of Natural Sciences, Forestry and Agriculture for her work with undergraduates as a teaching assistant, her involvement in her local community, her science communication and research work. For Bayer’s final two years as a Ph.D. candidate at the University of Maine she is a recipient of the Janet Waldron Doctoral Research Fellowship. You can follow her on Twitter @strctlyfishwrap.

Steve Almond is the author of eight books, including the New York Times bestsellers "Candyfreak" and "Against Football." His short stories have appeared in the Best American Short Stories, the Best American Mystery Stories, and Pushcart anthologies. His journalism has appeared in the New York Times Magazine and elsewhere. He lives in Arlington, MA, with his wife, his three children, and his debt.

Tina Nadeau is the Chief Justice of the New Hampshire Superior Court. She was appointed to the bench in 1996 and began serving as Chief Justice in 2011. Prior to her appointment to the bench, she served as legal counsel to Governor Stephen Merrill. She began her legal career in 1989 as an assistant attorney general in the homicide division. In 2013, Judge Nadeau received the Caroline Gross Fellowship award to attend the Kennedy School of Government on Executive Leadership; the 2013 Eric Cogswell Achievement award, recognizing commitment to addressing the over-incarceration of offenders with mental illness; and she was the 2013 recipient of the Marilla Ricker award, presented by the NH Bar to women in leadership positions. In 2015 she received the Advocacy award from New Futures and the Wheelok-Nardi award from Greater Manchester Mental Health for her work advocating for those with mental health and substance abuse issues.

Zand Martin is an educator fascinated by the teaching of leadership, and an adventurer passionate about the exploration of the world. His work exists at the intersection of these core interests, and takes many forms. From the experiential teaching of leadership to university students and young professionals, to skiing new routes in Siberia and consulting for educational organizations and the outdoor industry, Zand seeks to share his unique perspective on the leading of teams and self, and the value of developing a deep understanding of the magnificent world – both human and natural – that we inhabit. The grand project of his twenties was a 25,000 kilometer expedition that ran a human-powered line around the world at about 45 degrees North latitude. Zand is a Fellow of the Explorer’s Club, and was the 2011 Outside Magazine Adventurer of the Year, and the 2013 Polartec Challenge Grantee. He is a Senior Faculty member at the National Outdoor Leadership School. 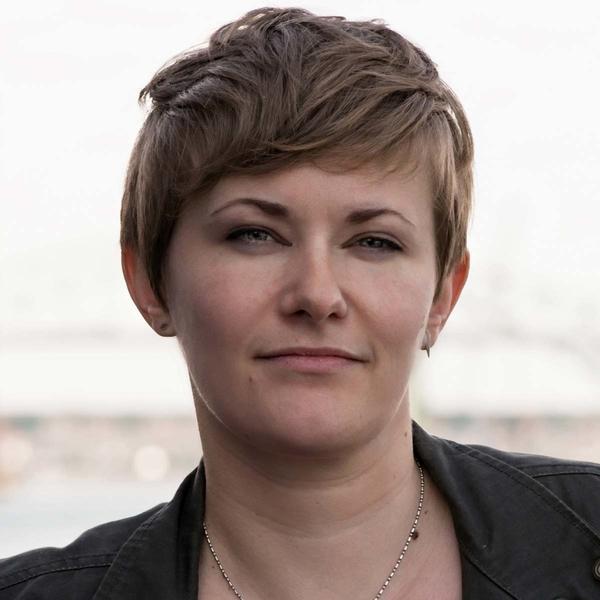