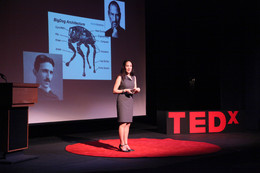 On Thursday, March 3rd at 7pm, TEDxFranklin&Marshall will be making it's return with this year's event: GLOBAL COMMUNITIES. TEDx Events are independently coordinated talks offered from community to community in the style of TED Talks, which include new and exciting discussions and thought-provoking presentations.

We have four incredible speakers coming to campus this year, including:
Prof. Nina Kollars, of F&M's Government Department
Mr. Carlos Graupera, Director of the Spanish American Civic Association in Lancaster, PA
Ms. Kristin Rehder, Documentary Photographer
Mr. Jack McGuire, retired Director of the American Red Cross
Each speaker will be bringing to the floor a presentation regarding how globalization and the unification of people from around the world has changed how people act, think, and speak today.

Tickets are only $5, but since there is limited space in the Green Room Theater, be sure to claim your spot as soon as possible! We hope to see you there!

Carlos Graupera is the President of the Spanish American Civic Association and has been since its founding in 1973. During his tenure at SACA, his work has led him to do various important community development activities such as organizing the Centro Hispano in Lancaster, opening Nuestra Clinica bilingual mental health, drug, and alcohol outpatient clinic, and developing Nuestra Clinica Residencial, a Latino focused residential drug and alcohol treatment program for adult males. During his tenure with the organization, he has overseen the creation of SACA Development Corporation- a housing development corporation dedicated to home ownership opportunities for inner city residents. He was also the Chairman of the Governor’s Advisory Commission on Latino Affairs.

A leader in turnaround management, Jack McGuire helped to revitalize a succession of companies, including the American Red Cross. When the organization was reeling from a public relations crisis surrounding their performance in the onslaught of Hurricane Katrina, they selected McGuire as President and CEO to refocus the organization. Through his experienced leadership, effective external and internal communication, and leveraging of the power of human capital he made the necessary changes for the organization to regain its credibility and get back on track. Drawing from his Harvard MBA education and his experience as a US Marine Corps Captain, McGuiredemonstrated leadership under fire at not only the Red Cross, but also during his career at Johnson & Johnson and at smaller NASDAQ companies. He resides in central Vermont with his wife of 40 years and has taught at the Tuck School of Business at Dartmouth College since 2008.

A documentary photographer and writer, Kristin Rehder explores concepts of community in places where she lives. Her latest project is a photo documentary of refugees resettled in Lancaster from nineteen countries. Kristin developed a specific methodology for her work while completing a master’s in liberal studies at Skidmore College with concentration in the cultural history of photography. Her partner, Sue Washburn ’73, is chair elect of the F&M Board of Trustees.

Professor of Government and Security Studies

Nina Kollars is Assistant Professor of Government at Franklin & Marshall College. Dr. Kollars' research investigates the processes by which individuals and groups innovate and adapt when in high-stakes contexts with inadequate resources. She is a committed researcher on pedagogy and active learning processes. Her work has been published in the Journal of Strategic Studies, Security Studies, Survival, and most recently in International Studies Perspectives. She holds a Ph.D. in Political Science with a specialization in Security Studies from The Ohio State University, and an M.A. in International Relations from George Washington University.