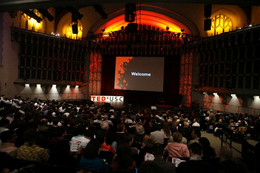 At its heart, the mutual goal of TED and USC is to foster the spread of great ideas. USC aims to provide a platform for the world's smartest thinkers, greatest visionaries, and most-fascinating teachers to inspire people to gain a better understanding of the issues faced by the world and create a better future. And thus, USC partnered with TED to host the first-ever independently organized TED event at a university.

As the first university to pilot the TEDx program, USC found great synergy with TED and considers this event to be a grand experiment – one where new ideas, dialogue, and conversation are delivered to the USC community through a wide array of thought-provoking and innovative content.

The TEDx USC “Ideas Empowered” conference stayed true to the spirit of the TED conference – hosting some of the world's most prolific thinkers and doers, and challenged them to give the talk of their lives in 18 minutes or less.