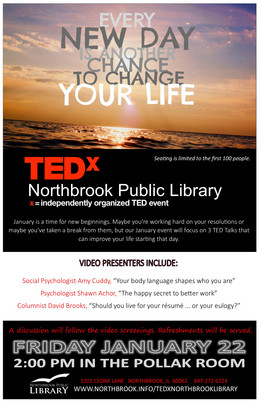 January is a time for new beginnings. Maybe you are working hard on your resolutions or maybe you've taken a break from them, but our January event will focus on TED Talks that can improve your life starting today.

Join us as we screen three prerecorded TED Talks and have a discussion afterwards. Refreshments will be served.

-Social Psychologist Amy Cuddy, "Your body language shapes who you are"
-Psychologist Shawn Achor, "The happy secret to better work"
-Columnist David Brooks, "Should you live for your résumé...or your eulogy?"

"What video did you like the most and why?"

Although Amy Cuddy mentions texting briefly, a few audience members were interested in further examining how texting and emails work as viable methods of communication without body language. Another mentioned that though cortisol is often thought of as a negative, there are positive benefits to it in stressful situations.

Many audience members enjoyed Achor’s humor and noted that it was an effective way to get people to pay attention to his message. One woman shared a story of how two of her children have taken life paths she didn’t expect or necessarily want for them. One son after graduating college and working a bit decided to become a dog walker which shocked her, but Achor’s message of reframing our perspective made her think about the fact dog walking seemed to make her son happy so she could be happy for him.

A few audience members seemed particularly taken by David Brooks’ message. Many commented that thought they had heard him speak on talk shows or read his newspaper columns, that his talk showed an additional depth of thought and character. One man mentioned his talk applies to everyone because “the final form of love is forgiveness.” Someone noted that although Cuddy’s video was more practical and instant, Brooks’ had a depth to ponder further upon.

"Did anyone make goals or resolutions for the New Year, and if so did these TED Talks make you think about them any differently?"

A few people said the talks made them reflect on their own goals. One person started to think more about how some days she walks into a room in a happy, outgoing mood…yet other times she feels reserved, and how she could try and learn what makes her happy on the days she is feeling great. A few mentioned they would start listing three gratitudes each day as Shawn Achor’s talk suggested.

"Did you learn anything you would apply to your own life?"

"Final thoughts about the TED Talks?"

- Watch your expectations, can’t be happy all the time
- How we react to bad situations is important
- Listen to your own voice, how it sounds and if it properly conveys your intention
- Don’t respond to negative people

-Amy Cuddy's book Presence: Bringing Your Boldest Self to Your Biggest Challenges
-David Brooks' books including The Road to Character and The Social Animal: The Hidden Sources of Love, Character, and Achievement
-Shawn Achor's books including The Happiness Advantage and Before Happiness
-David Brooks, "The Social Animal"
-Amy Cuddy "This is How Our Bodies Betray Us in a Lie"
-Shawn Achor's Reading Suggestions
-Alain de Botton, "A Kinder, Gentler Philosophy of Success"
-Brené Brown, "The Power of Vulnerability"
-TED Playlist: A Better You
-TED Playlist: What Makes You Happy?