TEDxUTSC invites you to go beyond what you are and aren’t willing to know. This unapologetic journey will allow you to step outside of the status quo of information, challenge norms, and allow you to open your eyes to worlds not yet discovered.

Dare to Know. Dare to know where our childlike curiosity has gone, dare to know what it would be like to challenge a regime in order to enlighten young minds, dare to know what it takes to overcome insurmountable stresses to gain success. We dare you to open your minds to the incredible ideas we have lined up for you. This conference will leave you with a mind filled with amazing ideas to change the world and keep it moving forward.

The Only Human Dance Collective (OHDC) has been a part of the University of Toronto community since 1999. It has a unique all-inclusive mandate, which is to welcome all dancers regardless of experience. OHDC introduces many to the world of dance, reacquaints seasoned dancers with their first love and creates a home for those who have moved away from their original studios. Every year OHDC puts on a professional dance production showcasing various dance styles, including Jazz, Modern, Contemporary, Ballet, Hip-Hop, Chinese Dance, Belly Dance, and more! As the four elements are the foundation to life, OHDC’s theme, “Elements” will be the foundation of this year’s production, which will be held at Hart House Theatre from March 17 – 19, 2016. TEDxUTSC Participants will be able to experience how these elements counterbalance each other and can be personified to different characteristics through dance.

TheUncharted is a spoken word collective that is dedicated to providing a unique and important narrative to our supporters. We are focused on being a voice for our community and providing our supporters with the stories and energies that will move them forward in their own lives as well. We want our supporters to Dare to Know that they can make powerful and long lasting change in their lives and that TheUncharted is here to be a vehicle for change.

Alex McCulloch is a multidisciplinary artist in music, theatre, dance, poetry, as well as an arts educator. She has performed in many styles including folk, blues, jazz, rock, r&b, and musical theatre with a variety of groups across the GTA. Alex believes music has the power to speak to people on an emotional level and to tell stories about the world. Her songs are lyrically driven with a strong rhythm and powerful voice that serves to highlight the emotional content. Some of her influences include Bruce Springsteen, Joni Mitchell, Norah Jones, and Alicia Keys. As well as being a literature student at the University of Toronto, she also runs a home recording studio with her partner called “Martyr’s Hope Studios.” It is there she is currently writing her first solo album to be titled, “Serenades,” which she plans to tour across Canada and the United States.

Bill graduated from UTSC before completing graduate studies at the University of Ottawa. He teaches a number of courses in the department of Management at UTSC, where he has won several awards for teaching and extracurricular support. Bill supervises students who wish to pursue entrepreneurial opportunities during their co-op work terms, helping them build business plans and bring their concepts to market. Bill is involved in several student organizations, and continues to be involved in many of the startups that he has helped to launch.

Diane Hill is from the Oneida Nation of the Thames First Nations Community. Diane attended school at a young age on Oneida and grew up in the community. Diane has an older brother, Zachary, and a mom, Renae, both of whom inspire her and are the backbone to her journey. Diane pays homage to her family and relatives for being the main supporters and influencer's in her determination in education and advocacy of her community. Diane left her community and moved to Toronto to pursue education at the University of Toronto Scarborough Campus. Through work with other students, and the elder on campus among many other community influences Diane began to pursue a stream in the Health Studies program. Diane has always had a passion for connecting with people and advocating for indigenous issues; she intends to do so for her academic career in the health field and further on for her community.

Hamza Khan is an award-winning marketer and entrepreneur. He’s making waves as the co-founder of Splash Effect, an agency that helps brands in the education sector supercharge their marketing & communications. Hamza has also founded Year One, a publication aimed at inspiring and motivating people through periods of personal and professional transition. His most recent venture, SkillsCamp, is a school for the soft skills. Hamza holds an Honours Bachelor of Arts from the University of Toronto Scarborough (Class of 2010).

Jamie Kennedy has been instrumental in shaping the culinary landscape in Canada. His innovative approach to gastronomy, commitment to sustainable agriculture and advocacy of local food have been unwavering. Jamie has helped pioneer ‘farm to table’ practices nationwide and has continued to foster important ties between farmers and chefs across Ontario. He has applied the slow food philosophy in every aspect of his business. His seasonal methods of cooking and involvement with the local food movement continue to inspire progress in agricultural and gastronomical communities across Canada. In 2010, Jamie was honoured for his contributions with two major appointments; with Chef Michael Stadtländer, he was awarded for his leadership at the inaugural Governor General’s Award in Celebration of the Nation’s Table, and soon after he was appointed to the rank of Member of the Order of Canada.

Dr. Maliha Chishti is a researcher specializing in war and post-conflict peacebuilding. As the former director of the Hague Appeal for Peace at the United Nations, Maliha helped to initiate the historic Security Council Resolution 1325 on women, peace and security. Her work on this landmark resolution was recognized by the University of Toronto’s ‘Great Minds’ alumni campaign. Maliha implemented one of the first training and capacity-building programs for women in post-conflict Afghanistan and served as the Social Impact Consultant for Canada’s first and largest ‘signature’ aid project in Kandahar Afghanistan. She is currently working on a book manuscript entitled Decolonizing Peacebuilding: Lessons Afghanistan.

Professor Maria Assif, a Literature Professor and Arab Canadian literary critic, joined UTSC in 2008. She is Associate Professor of English, Teaching Stream, as well as the Coordinator of Writing about Literature. She received her Ph.D. in English from Case Western Reserve University in Cleveland, Ohio in 2005 and taught in Chicago for three years before getting tenure in 2008. Her work celebrates the complexity of Arab women writers' communal and individual identities, particularly in light of 9/11 and its aftermath, and investigates the broader representations of Arabs in literature, film and media. Her articles, essays and interviews have appeared in tens of journals and anthologies. Pr. Assif has two manuscripts in progress: (1) Muslim Women: Multiple Voices, Multiple Vistas and (2) Intimate Voices: A Collection of interviews with Arab Women Writers. Pr. Assif lives in Toronto with her husband, their two young daughters and cat.

As Frontman at Rockstars of Canada, Mark is responsible for overseeing the growth of Canada’s largest youth entrepreneurial community. Mark graduated from the University of Waterloo’s Science & Business program in 2015, and was subsequently named one of Canada’s Next Top 36 Business Leaders. Prior to founding Rockstar, Mark led a team of twelve undergraduate students in planning the largest University of Waterloo Fusion Conference in 2013. Mark currently gives back to his community by serving on the board of Humber Valley Hockey Association, and a mentor through the Kitchener-Waterloo Business Education Partnership Speakers Bureau.

At a young age, Melanie was encouraged to use her curiosity to navigate through life. Discovering her passion for community, sports and the arts, she would become a young leader winning multiple coaches’ awards and a community of excellence award. Wanting to broaden her scope, Melanie traveled to India where she had the opportunity to work with advocates of the local community. In her current capacity at the University of Toronto Scarborough, she engages in community development work in the Planning, Partnership and Strategic Affairs portfolio. Melanie continues to allow her curiosity to lead her to the possibilities of tomorrow.

Sarah Lynn Kleeb received her PhD (Religion) in August 2015, and currently teaches humanities courses at the University of Toronto’s Scarborough campus. Sarah’s doctoral thesis, Gustavo Gutiérrez’s Notion of “Liberation” and the Legacy of Marx’s “Ruthless Criticism”, critically examines connections between religious belief and (social, political, economic) dissent, particularly as manifest in Gustavo Gutiérrez’s liberation theology. Sarah lives to teach, and is passionate about fostering critical thinking and rigorous questioning in her students. Her teaching methodology approaches students as citizens in a vastly complex and diverse world, stressing the opportunity questioning brings for imagining society from a multiplicity of worldviews.

Distinguished Professor of Islamic Studies at the University of Toronto, founding Director of the Centre for South Asian Civilizations, and past Chair of the Department of Historical Studies, Dr. Shafique Virani (PhD, Harvard University) is an award-winning author and internationally recognized public speaker who has addressed people from over 50 countries and audiences of over 15,000. His book, The Ismailis in the Middle Ages: A History of Survival, A Search for Salvation, is believed to be the first academic book of any major university press to have had its own book trailer. Describing him as “a visionary,” the United Nations honored him for dedicating his efforts “to the cause of extending the frontiers of knowledge and the welfare of humankind.”

Steve Mann is widely regarded as “The Father of Wearable Computing”. His work as an artist, scientist, designer, and inventor made Toronto the world's epicentre of wearable technologies in the 1980s. In 1992, Mann took an invention from Toronto to the Massachusetts Institute of Technology, founding the MIT Media Lab's Wearable Computing Group. Some of Mann's inventions include: the EyeTap Digital Eye Glass, predating the Google Glass by 30 years; the Smartwatch; HDR (High Dynamic Range) imaging; the Hydraulophone, the world's first musical instrument which makes music from water. Mann is Chief Scientist at Meta, a California-based company which raised 23 million to deliver AR glasses to the mass market. He is also Chief Scientist at the Creative Destruction Lab, a seed stage accelerator with Canada’s top angel investors. Mann received his PhD from MIT and is a tenured professor at the University of Toronto in various Engineering departments as well as in Computer Science and Forestry.

Valerie is an alumna of the University of Toronto, with a degree in Political Science. Short after her undergraduate studies, she moved to Los Angeles to pursue law school with an interest in entertainment law. Life threw her curve balls and instead of working in Hollywood, she relocated to Africa. Now living in the Democratic Republic of the Congo, she now serves as a visiting professor at a local university, teaching underprivileged students with harrowing stories. Spending years at the University of Toronto learning about development in the global south, she now lives in one of the world's poorest countries, seeking to bring consciousness to the struggles of education in the Congo. 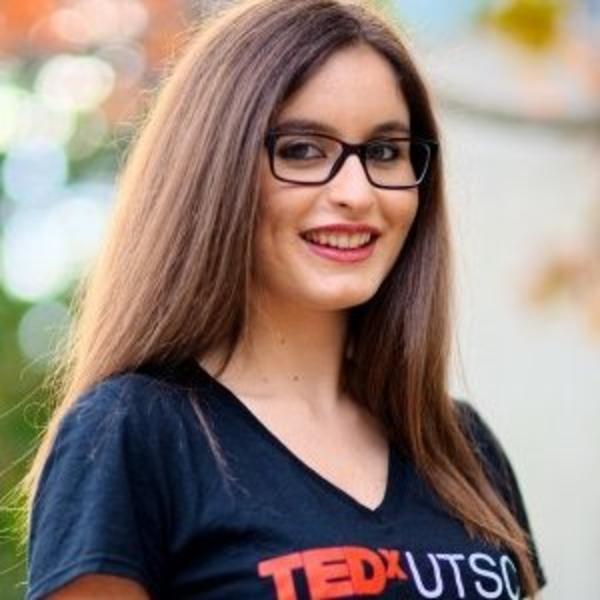