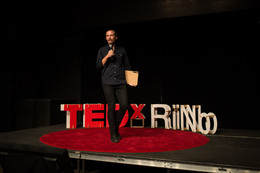 It's the beginning of new life. It's a reminder of our roots and our history. It's the start of something smart–an innovation; a new idea. The origin is where it all begins.

We're excited to announce that our second TEDxRiNo event took place on August 24, 2016 at EXDO Events Center.
The theme–rooted in the ideals and history of the RiNo neighborhood of Denver–will share ideas and stories about innovation, new ideas, and pioneers.

Winners of the 2015 Rockygrass band Competition. Mark Morris(guitar/vocals) who was featured in Powder Magazine in 2014 for his exploits both on guitar and on skis. Kyle James Hauser(banjo/vocals) whose songs appear in 6 films and 3 MTV shows. His latest album was #1 on Colorado’s OpenAir for 3 weeks and voted as a Top Ten local album of 2014 by Colorado Public Radio listeners. Alex Johnstone(mandolin/vocals) is a veteran of Rebel Record’s Spring Creek who released 4 studio albums and toured internationally with appearances at Telluride Bluegrass Festival, Merlefest and Strawberry Music Festival and with Del McCoury, Peter Rowan and Drew Emmitt. Coleman Smith(violin) holds a degree in violin performance and is a 5 time winner of the Bob Wills Fiddle Competition. He has toured the world with stage/screen’s Ramin Karimloo as well as The Hickory Project. Carl Meinecke(bass) has supported Drew Emmitt and played in orchestras, quartets, and jazz ensembles nationally.

Reason the Citizen is an American hip-hop artist based in Denver, CO. Born and raised in southern California, his musical style is heavily influenced by the cultural landscape of his hometown, Oceanside. A sharp and linguistically skilled performer, his live set has been critically acclaimed and he has shared the stage with a number of notable hip-hop acts including Nas, Macklemore, Hopsin, MGK, Hieroglyphics, Mac Miller, Curren$y, Action Bronson, Ghostface Killah and more. After a breakout year that included a tour with Brother Ali and appearances on Vans Warped Tour, and A3C Festival, Reason the Citizen has recently released his 3rd studio album, Finding Success Through Failure. FSTF focuses heavily on the repercussions of failure, and reveals its necessity in a creatively hazardous environment. Ranging in intensity, it stands out as a testament to the ever improving emcee's ability to combine razor sharp double-time, with thought provoking perspective and insight.

A proud Denver native, Beverly has been an entrepreneur for more than 25 years, and is dedicated to shaping food policy and broadening not only food access, but also food and nutrition literacy. Beverly founded the urban farmer’s market, Mo’ Betta Green Marketplace in June 2011 in Denver’s historic Five Points neighborhood on three principles: Food literacy, environmental stewardship and social responsibility. In October of 2015, Beverly founded Seeds of Power Unity Farm to provide a community learning platform for urban agriculture and design, and also create a small production site for heirloom vegetables sourced directly to Mo’ Betta Greens. Since it’s opening, Seeds of Power Unity Farm and Mo’ Betta Greens Marketplace have improved community connectedness, increased awareness between food consumption and overall wellness, and helped to include disconnected populations to local food.

Don Burnes is currently the Chair, Board of Directors, for The Burnes Center on Poverty and Homelessness at the Graduate School of Social Work at the University of Denver where he is also an Adjunct Professor and a Scholar in Residence. He is the Co-editor of and a contributing author to a new book on homelessness, Ending Homelessness: Why We haven’t, How We Can. A local philanthropist concerned with the issues of homelessness and housing, he serves on the State Interagency Advisory Group on Homelessness for Governor Hickenlooper and served in a similar position for Governor Bill Ritter. He is a member of Denver’s Road Home Commission and the Colorado Housing and Homelessness Funders Collaborative. Don has also been an executive director for various nonprofits, a historian, a researcher and educational policy consultant for the US Congress, a prolific writer, a philanthropic consultant, and active in the faith-based policy community around issues of homelessness and poverty.

For more than 15 years, Jamie Licko has been shaping the evolution of cities, neighborhoods and districts, as they face change, challenge and growth. Licko has focused her career on nurturing public/private partnerships and utilizing unique approaches to keep local community fabric intact even as places face changing social and economic realities. Jamie’s consulting company Centro Inc. has provided service to clients in more than 50 cities in 15 states across North America, as well as in the United Kingdom and Singapore. Recently, Licko has been leading efforts in the RiNo Art District as it faces unprecedented development pressure, guiding the neighborhood to form special districts and to bolster its efforts to protect the character and creatives that have brought RiNo to the fore. She currently serves as RiNo’s executive director, and continues to work on special projects both locally and internationally.

Kurt MacDonald is the founder and director of NatureSays, a consultancy firm that engages and empowers clients with strategies employed by the world’s most unique organisms. Prior to the founding NatureSays, he was the honoree and holder of the Kurt D. MacDonald Distinguished Teaching Chair at Kent Denver School, where he was a science teacher and administrator for sixteen years. He was recognized as the University of Colorado at Boulder’s Most Outstanding Graduate in the College of Arts and Sciences and also earned a graduate degree in Behavioral Neuroscience from CU Boulder. He currently lives in Colorado with his wife, two daughters, and retired greyhound.

As the HR Training & Development Specialist for RANGE Consulting, Rachel Lucas, PHR, has made it her mission to end LGBT workplace discrimination in Colorado. RANGE Consulting is a social enterprise of the GLBT Community Center of Colorado which celebrated its 40th anniversary this year. Rachel’s previous experience with Neiman Marcus and Ernst & Young has informed her work in Human Resources and adult education and training. A passionate supporter and advocate of workplace diversity and inclusion, equal employment rights and protection, and the LGBTQ community, Rachel holds a Bachelor’s of Business Administration degree, the Professional in Human Resources (PHR) designation, and is a member of and volunteers for the Mile High Society for Human Resource Management.

Thatcher Wine is founder and CEO of Juniper Books. Since 2001, Thatcher has explored the role printed books play in the digital age, including the value they bring us, the stories they tell about who we are, and how best to feature what we love about books in new, creative ways. Juniper Books crafts specialty book collections for purchase and creates and designs custom libraries, ensuring books continue to play a fundamental role in who we are and who we aspire to be.