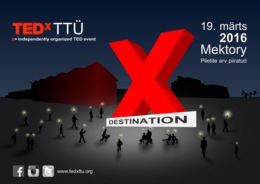 TEDxTTÜ is a TED-like conference independently organized by students of Tallinn University of Technology. The idea of TEDxTTÜ is to offer interesting and inspiring time to students, employees and student-minded people. People from different fields like science, sports, arts and other great areas get to present their ideas in an 18-minute speech.

The environmental activist Cristof Middeke is coming to tell us how to act in future in order to survive. "Being part of the solution is easier than being part of the problem", says wilderness guide and father Christof "Huck" Middeke in this positive and inspiring talk about happiness, human nature, reality, our survival and sustainable future. While reminding that our life depends on all other life and vice versa, Huck points out that we have (and are) all the solutions we can possibly need to solve our problem and that a lifestyle of sustainability and world peace is a surprisingly easy and worthwhile lifestyle to pursue. Huck explains why he trusts the life of his son to a hummingbird

They say, that “Computer games are good for nothing”. But a young guy from Tartu is proving it wrong. His name might not sound familiar to you, but thousands of people in Asia are following him daily online. He is a professional gamer, who is convinced that there is not such a thing as an easy job. Nor is playing DOTA2, which he has been playing professionally for years. Clement is not going to talk about only about how he became a gamer, but also how to turn hobbies into a job to make living with.

Can you teach a human to be creative? Can you teach someone to think outside of the box? Or is it already coded into your genes and capability? If not, then how to do it? Theorist and practitioner Goran Vlašic, who has won many awards for his researches working as an economist professor at Croatia University, is going to give answers to our questions at TEDxTTÜ.

There are not many people who have had an opportunity to visit prisons in Thailand and see the life inside there. Ivo Pukk is one of the best trainers of martial arts in Estonia, who has had the privilege to see on the sidelines how prisoners who have got a life sentence are meeting in boxing area to fight for freedom. Sounds crazy?

What’s going on in the virtual world has started to affect the real world we live in more and more each day. The view on life as we have known so far, is going to change forever. The two worlds melting into one, cryptic currency and cyber attacks on privacy are just a brief review of all the interesting thoughts, that a professional in cyber defense and IT-specialist Joseph Carson will come to share with us.

Critically acclaimed Estonian painter, who belongs among the best 100 painters in the world, is a person, whose creations and vision of the world simply cannot be pushed into boundaries of any kind. You will hear at TEDxTTÜ, what Kaido thinks of creativity and it’s being, what the society needs and expects. Has it been closed in strict frames by the system of our own creation? What has happened to the humans’ ability to be free in their thoughts and actions? Come and listsen, what Kaido has to share with us.

Kaspar is thinking a lot about what is going to happen to the labour market in the future. He is thinking about this daily in his laboratory and in his spare time at Tartu's Artificial Intelligence think tank. At TEDxTTÜ Destination Kaspar is focusing on describing us the artificial intelligence manner of thought and giving us an overview what could happen if the future cars are steering themselves/itself.

Everybody knows, that the greatest taker of selfies in Estonia is our president Toomas Hendrik Ilves. Did you know, that one of the most famous selfies is the portrait of Mona Lisa? But have you ever thought, why selfie has become so popular? Is this a natural part of life or a dangerous addiction? University of Tallinn’s doctor of sociology Katrin Tiidenberg is a person that knows everything about selfies and takes a moment with the listener of TEDxTTÜ to take a look in the magic mirror and ask: „Selfie, oh selfie on the wall, what is this selfie in this world?“

Stereotypes and prejudices are natural in the world today, but how simple will it be to look past and break them? Often people seek quick answers and won’t delve into the subject and try to understand the broader picture. Well-known islam expert in Estonia Kristi Ockba brings to our listeners many exciting thoughts, that are connected to faith as well as people’s own shaped choices in life.

Mart Noorma is a well-known Estonian physicist, an engineer, space scientist and the pointperson of student satellite. He’s a person that can’t see a reason, why Estonia couldn’t be a considerable space state. How can Estonia contribute to humanity’s reach for the space? Mart launches the listeners to the future with his speach, to the year 2050 and opens a whole new perspective to this question. One has to think big and as Mart Noorma has said: „If we, estonians, won’t start colonizing space, then who will? Americans? We can’t let them have all the fun to themselves.“