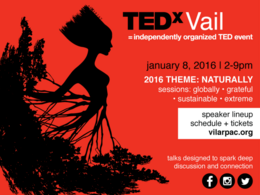 What’s in your nature?

It's that sense of excitement you get with each amazing discovery... It's that rush you feel when you're hiking high above the trees... It's the tranquility that washes over you as the vast white of the Back Bowls drenches your mind in possibility...

Your connection with nature shapes you, it’s what makes you, YOU!

As a nature lover and idea monger, TEDxVail wants to know how you feel connected to the world around you. Hear from sets of passionate idea sharers. Broaden your impact, it’s in your nature to live life purposefully. If it's tech or entertaining or design that grab you and send you into other worlds, we promise you'll connect with your neighbors in ways you had not even before imagined.

So tell us: what's in your nature?

Amy Ben-Horin is the Co-founder/Executive Director at Ute Springs ELC. Amy has her Master’s Degree in Education with a concentration in Adventure and Environmental Education for Special Needs. Using her decade of experience in non-profit youth programming she creates curricula for all programs, in charge of program development, program staffing, scheduling, collecting and managing registration and is Lead Facilitator during camp and during all school activities. In addition, Amy has been in charge of licensing, permitting and creating partnerships with the school district and fostering relationships will individual schools and their teachers.

Brent is a leading authority in business performance improvement strategies, coaching thousands of business leaders since the late 1990s. He primarily focuses on leadership development. He has extensive knowledge in Lean Six Sigma, Lean, Change Management and other Leadership Development disciplines. He has national and international business experience with all sizes of companies across a range of industries. His ability to leverage his deep expertise, outstanding partnering skills, and bias for results has yielded hundreds of millions of dollars in benefits to the bottom line for his clients. In his early years, he was a Black Belt in General Electric's highly successful Lean Six Sigma Quality Program.It was at GE and Price Waterhouse Coopers where he established the foundation for his business leadership skills. In his current role at Acuity Institute, he actively advising leaders and organizations on business performance improvement.

Chris Anthony, a Colorado native, University of Colorado graduate and longtime Vail resident is a professional extreme skier. For a good portion of his life Chris has competed at an international level in both the sports of cycling and skiing. For the past 26 years, Chris Anthony has traveled as an athlete with the Warren Miller film team, free-lanced for several publications, co-authored a guide book, commissioned and wrote a screenplay, as well as hosted and produced several television and film projects. Additionally, Chris has his own consulting and guide business as well as founded and is Executive Director of the Chris Anthony Youth Initiative Project, "Improving Quality of Life through introducing Youth to Educational and Enrichment Opportunities."

Using the transformational power of music, Daniel Tyler Pohnke combines empowering entertainment to open hearts and inspire people to look within to find their own unique Brave New World, being the best they can, every day, in every way.

Ira Helfand, MD is co-President of the International Physicians for the Prevention of Nuclear War, recipient of the 1985 Nobel Peace Prize. As co-Founder and Past President of Physicians for Social Responsibility, IPPNW’s US affiliate, he knows terrible truths about nuclear war.

Co-Founder, Board Member, and Chief Transition Officer, Burning Man Project Harley oversees the merging of Black Rock City LLC, Black Rock Arts Foundation (BRAF) which she cofounded, and Burners Without Borders into the Burning Man Project. As City Manager she created and managed the Safety and Community Services of Black Rock City for 15 years. That city is 70,000 in the middle of the Nevada desert for one week a year. And then it leaves no trace.

Jared Paul is a writer, performance artist, and organizer from Providence, Rhode Island. He is a two-time Individual World Poetry Slam Finalist and has been a featured poet at the Greenbuild International Conference & Expo, Brave New Voices, Post Secret, South By Southwest Music Festival, and Netroots Nation.

J.P. Canlis first picked up a glassblowing pipe at the age of 16 at Punahou School in Hawaii. He never looked back. After studying glass at Alfred University in NY, Pilchuck Glass School, and creating works for various international glass artists, including being an integral part of Dale Chihuly’s glassblowing team for almost 10 years, J.P. opened Canlis Glass in Seattle in 2005.

Justin Bogardus, Dream Tree Films writer/director of the viral Nature Rx You Tube series, creates thought-provoking movies and original entertainment. Justin moved to Boulder, CO to follow his other passion of teaching Buddhism (which he currently does as a part time teacher at Naropa University) and continuing his film and production career in scenic Colorado. Justin still maintains his film/video career in NYC and travels to the big city and Boston several times a year for film/video production work.

Dr. Lauren Bramley is the founder of a Hong Kong-based multidisciplinary medical practice providing complete health and wellness. She spent the last ten years focused on anti-ageing medicine, endocrinology and helping athletes achieve peak performance. Dr Bramley’s new clinic in Whistler, BC, Canada allows her to focus on her other passion, alpine skiing.

In 2004, Melissa Stockwell became the first female to loose a limb in Operation Iraqi Freedom. Instead of feeling sorry for herself, she chose to accept the loss of her left leg and live her life for those who gave the ultimate sacrifice.Forever a Patriot, Melissa loves all that America stands for. Always an athlete, she competed in the 2008 Paralympic Games in the sport of swimming, is a 3x Paratriathlon World Champion and a Paralympic Hopeful for the Rio 2016 Paralympics. Melissa is a mentor to other wounded veterans through the Vail Veterans Program, she co-founded Dare2tri Paratriathlon Club. A new mom, Melissa inspires her son to dream big.

Mikela Tarlow, founder of Actionlab360, an online project based learning platform, interviews three Stone Creek Middle School students on their transformational educational experiences. Troy, Connor, and Nicole come to life when sharing how PBL (project based learning) takes their interest in learning up a notch.

After a recurrent brain tumor stole not only her mobility, but a dream of a tennis career, Peyton Palermo chose hope. She chose to “be strong, fight hard, and dig deep.” This 17 year-old Colorado native fought back and is not only winning on the court, but in life.

Healthgrades CEO and Managing Director, and at Vestar Capital Partners, head of the Digital Media group

Roger Holstein believes the most powerful thing in the world is our health. To this end, he has dedicated his career to transforming the healthcare industry and has spent the past 35 years developing innovative, new businesses at leading brands including Healthgrades, WebMD and Medco.

Seth Glier attended Berklee College of Music for a year before dropping out to be able to tour full-time. He wanted to make music for people not grades. Since then, he has averaged over 200 shows a year, and shared stages with artists such as James Taylor, Mark Knopfler, The Verve Pipe, Edwin McCain and Ani DiFranco. He's been compared to Bruce Springsteen and Billy Joel. If I Could Change One Thing, his fourth album is a successful move into mainstream pop. Glier's 2011 album, The Next Right Thing, for which he recorded his own vocals in his parents’ basement was nominated for a Grammy Award. In 2011, he took home Best Love Song for his track "Naia" at the 10th Annual Independent Music Awards. In 2012, "Next Right Thing" won Best Social Action Song at the Independent Music Awards. Glier is an outspoken advocate for autism awareness. His song “Love Is A Language” was inspired by his nonverbal autistic brother.

Stephan A. Schwartz is a Distinguished Consulting Faculty of Saybrook University, and a Research Associate of the Cognitive Sciences Laboratory of the Laboratories for Fundamental Research. He is the columnist for the journal Explore, and editor of the daily web publication Schwartzreport.net in both of which he covers trends that are affecting the future. He also writes regularly for The Huffington Post. For 40 years he has been studying the nature of consciousness. He is the author of more than 130 technical reports and papers. In addition to his experimental studies he has written numerous magazine articles for Smithsonian, OMNI, American History, American Heritage, The Washington Post, The New York Times, as well as other magazines and newspapers. He hás produced and written a number television documentaries, and has written four books: The Secret Vaults of Time, The Alexandria Project, Mind Rover, Opening to the Infinite, and his latest, The 8 Laws of Change.

Trista Sutter, a familiar name in the world of reality television, now lives her happily ever after as a stay-at-home-and-work mom near Vail, Colorado with the poetic firefighter she met on the first season of The Bachelorette and their beautiful blessings, Max (8), Blakesley (6), and fur babies, Tank and Sophie. She's authored "Happily Ever After: The Life-Changing Power of a Grateful Heart."

Walker Mackey quests vertical exploration - lots of it! Thru the practice of Paralpinism (flying from mountains with a parachute) he finds deep understanding in this world of high exposure. Walker inspires, by living a life on the road intimately connected to risk management and dedicated to facing fear. Dangerous, deeply dangerous, Paralpinism is deadly. Walker balances living and surviving with thriving. 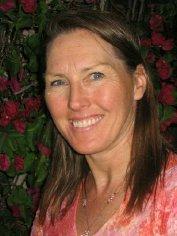