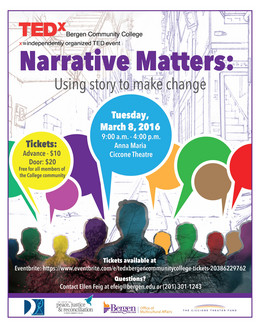 This TEDx event will explore the nature of narrative - personal and public - through talks focusing on innovative environmental programs, art that transcends and young people making social change.

Adriane M. Raff Corwin is a political analyst and trained futurist who teaches Political Science courses at Bergen Community College. She obtained her MA in Political Science at the University of Hawaii at Manoa, where she focused on Futures Studies and foresight thinking in politics and society, and her BA in Human Rights at Bard College. As an independent researcher and analyst, she assesses how important drivers of change and current trends could affect the well-being and futures of societies and cultures, government entities, businesses, non-profits, and individuals.

Ali Stroker is a groundbreaking performer with an inspiring story. In 2009, Ali became the first actress in a wheelchair to earn a degree from the NYU Tisch Drama Department. This year, the GLEE and GLEE PROJECT star made history as the first actress in a wheelchair to appear on a Broadway stage, where she is currently originating the role of Anna in Deaf West's 2015 revival of Spring Awakening. Her performance in the role of Olive in The Twenty-Fifth Annual Putnam County Spelling Bee earned Ali a Barrymore Award nomination, and exceptional acclaim when reprised at the Papermill Playhouse, thirty minutes from her hometown of Ridgewood, New Jersey. An ardent humanitarian and advocate, Stroker is a co-chair of WOMEN WHO CARE, which supports United Cerebral Palsy of NYC. BE MORE HEROIC, an anti-bullying campaign which tours the country connecting with thousands of students each year counts Ali as a founding member.

Amanda currently works as the Environmental Director for the Town of Secaucus, NJ. She is a Commissioner for the town as well as chairwoman of their Environmental Committee. She is an organizer and environmental activist and is passionate about sustainable development and combatting climate change. She was a youth delegate in conferences such as the United Nations Framework Convention on Climate Change (UNFCCC) in Doha, Qatar where she was the State Department Liaison for the delegation. Amanda has been trained by Climate Reality Corps to effectively present information about climate change as a climate reality leader since 2013. Amanda has a Bachelor’s Degree in Environmental Studies with a concentration in Environmental Science. Amanda is a recipient of the 2014 United Nations ATOP International Day of Peace Award alongside Dr. Patch Adams for her work in Environmental Sustainability and was listed as one of the top 50 Most Influential People of Hudson County, NJ.

Anthony Fasano, PE, is a licensed engineer, published author, and STEM advocate. He has authored a bestselling Wiley published book titled Engineer Your Own Success, started two top rated iTunes podcasts for engineers, and serves as the Executive Director of the non-profit organization, The New York State Society of Professional Engineers. He has spoken for thousands of engineers and engineering students, inspiring them to be the best they can be.

Daniel Ally became a self-made millionaire at the age of 24. It all started when he realized that he was living far below his potential. After years of drug abuse and failing at life, Daniel was fed up. One day, he went to his local library and searched endlessly for truth. After discovering a few books, he decided to turn his life around. For many years, Daniel gave thousands of speeches, reached millions of people, and built successful companies, making Daniel a millionaire in the process. Search on the internet and you’ll find that TIME, Fortune, Business Insider, Yahoo, and other major publications have enjoyed Daniel’s work. He is also a top contributor on Entrepreneur Magazine. He is the author of two best-selling books, which can be found in 46 different countries in thousands of libraries. From billionaires in Boston to amateurs in Austin, Daniel has traveled to hundreds of cities, shaking hands and connecting with all kinds of people across the globe.

BIO: Greg Serian is a 2nd generation descendant whose grandparents survived the Armenian Genocide. He is the founder of the Armenian Genocide Society, armeniangenocidesociety.com, where he works with educational staff to share the survival story of his grandmother Anna Manoogian with NJ high school students. Her own words have been directly recorded and documented. Greg is an active member of the NJ Armenian National Committee of America and has also served as a consultant for the NJ Commission of Holocaust and Genocide Education. The Commission distributes Serian’s presentation as part of their Armenian genocide and culture curriculum. Serian has a Masters Degree in Computer Engineering and currently lives and works in Central New Jersey as an Information Technology Business Executive. He is a Musician, Recording Engineer and Producer with his own digital recording studio. He leads, manages and plays live with his classic rock band, Liquid Garden, throughout the NJ area.

Lessie Branch is a Senior Research Fellow at the DuBois Bunche Center for Public Policy at Medgar Evers College. She is also on faculty at Monroe College. Dr. Branch has a Ph.D. and an M. Phil from Milano School of International Affairs, Management, and Urban Policy as well as an MA in Political Science from the New School of Social Research. She completed her BA in Political Science at Fordham University. Her research examines the gulf between African American optimism about group progress and the actual data on continuing disparities and potentially speaks to wider questions of social knowledge, social beliefs and relative group position; even to questions of "consciousness" and ontology. Dr. Branch’s most recent project, Paradoxical Ebullience: Discordance Between Changing Black Racial Attitudes and Stagnation of Black Economic Progress is being considered for the Cambridge University Press series on Stratification Economics.

Michael Bell is a renowned American portrait artist, most famous for his larger-than-life sized narrative series paintings and for his infamous portrait clientele, which includes the late John Gotti, Dominic Capone III (Al Capone’s great nephew) and numerous actors from "the Sopranos", "Goodfellas", "A Bronx Tale" and more. Bell’s works are often the mirror to a tragic world, but they deepen our humanity through psychology, ghostly brushwork and personal color palette that draws on memories and silent echoes from the artist’s own dark, turbulent past.

Michelle Coghill Chatman, PhD (Iyalorisa Omo Olufina) is a cultural anthropologist who teaches undergraduate courses on African spirituality, Culture and Social Justice, and Urban Ethnography, at the University of the District of Columbia, in Washington, DC. As a contemplative educator, Michelle weaves mindfulness meditation, song, and reflective practices into her teaching to help facilitate students' deeper connection to course content, each other, and the broader world. She is an active member of the Association for Contemplative Mind in Higher Education and served as a faculty member in their 11th Annual Summer Session on Contemplative Pedagogy at Smith College. Michelle is enthusiastic about spreading contemplative practices among her campus community and has shared her “Coltrane Meditation” in faculty development sessions and in her classes. She is particularly interested in exploring contemplative traditions within the African Diaspora and translating them into viable resources

Rajat is the Founder of ThirdEye, a product that empowers visually impaired persons by verbally recognizing what they are looking at. Based on his experiences starting a company in college, he believes that all schools should encourage entrepreneurship and highlights his views on how we can fix our currently broken education system in his book What High School Didn’t Teach Me: A Recent Graduate’s Perspective on How High Schools are Killing Creativity. He also writes in Forbes and HuffPost and speaks around the world about incorporating entrepreneurship into schools. Get in touch with Rajat at RajatBhageria.com.

Rosa is a singer song-writer who has been performing and writing since the age of 11. She is currently studying theater at BCC and has been cast in a few BCC musicals such as "Three Penny Opera" and "Company." She is also signed as a songwriter to Alex Morelli Music in West NYC and is involved in many other projects. She feels that without the love and support of her family, her accomplishments would not be possible. One of her family members that has really supported and inspired her to pursue a career in the entertainment industry, has been her Grandmother, Ruth. The women she could proudly call her “Abuela” has a story about her life, when she fled from Cuba to escape one of the deadliest dictatorship, so that her family could have a chance to breath the fresh air of liberty.

Rubin Smyers is a 17-year-old transgender male from Ocean County, New Jersey. He came out to his parents in February of 2014, and to the rest of the world in June of that same year. He considers being transgender an important aspect of his identity, and he has a passion for the movement towards equality. Rubin is a senior at the Ocean County Vocational Technical Schools Performing Arts Academy, where he studies voice and actively participates in the schools theatrical productions. He hopes to go to college, earn a degree in musical theatre, perform on Broadway, and use his relative notability as a Broadway actor to promote important social causes such as transgender equality to his fans.

Suzanne is the Director of Communications for Rockland Farm Alliance, a non-profit dedicated to preserving suburban farmland. She has a Master’s Degree in English Literature, and she worked as an English professor and writer for a decade until writing ultimately opened up the portal to a career in farming and agriculture. Suzanne has always stayed close enough to the natural world to keep a few layers of soil under her fingernails, but high school science classes thwarted her ambitions to seriously pursue agriculture or animal science as a living. Despite her preference for poetry anthologies over biology textbooks, she found herself moving cyclically right back toward the earth as she moved into her thirties. She created Please Pick Project in 2014 after walking past a peach tree with heavy fruit languishing, unpicked, within reach of hundreds of people who walk past on the sidewalk. With the help of some agricultural experts and a generous group of neighbors, Please Pick Project e 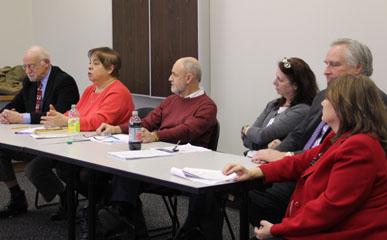