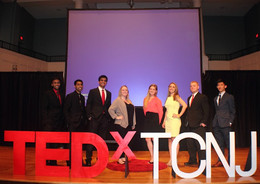 Our theme this year is "Light the Flame." Made with the quote, "a candle loses nothing of itself by lighting another candle" in mind, we hope to spark conversation and connection based on whatever ideas this theme may ignite.

Ami Shah is a junior at TCNJ who is a part of the 7 year medical program. Through this program, she spends three years at TCNJ and the following four at Rutgers New Jersey Medical School. At the end of the 7 years, she would have earned both a Bachelor’s Degree and a Doctor of Medicine. Ami has been a devout listener of TED talks since high school and they have been integral in opening her mind to all the new ideas and discoveries that exist in the world. She is so excited and humbled to join this TED community and have the opportunity to share her opinions with a group of curious minds like yourselves.

Catrina Sparacio, JD, RN graduated from The College of New Jersey (TCNJ) where she was first inspired to pursue a career in legal advocacy for nurses. Catrina is currently Founder and President of AmbroseFin, LLC, a health law consultancy specializing in nurse malpractice and promotion of quality care transparency. "Jersey grown", Catrina earned her B.S.N. from TCNJ and law degree from Rutgers University School of Law - Camden. She is licensed to practice law in New Jersey and licensed by NJ's Board of Nursing. Catrina served as clerk for Judge Laura LeWinn Presiding Judge over Mercer County Superior Court, Family Division. In addition to practicing family law, she represented clients in disciplinary actions against licensure boards and federal agencies. Since 2000, Catrina has practiced nursing including specialties in medical-surgical, perioperative, and ambulatory care.

Christian Balevski graduated from The College of New Jersey with degrees in both Physics and Finance. He is currently developing Solar Divide, a solar energy technology company focused on developing technologies to increase the efficiency and output of large-scale solar fields.

Jacque Howard grew up in Ewing in a large family — 12 uncles and aunts and six siblings. He learned what “community” was. Now he aims to help Trenton by helping create community with his nonprofit Trenton 365, as profiled here in U.S. 1 Newspaper. He was quoted like this: Trenton was a major industrial port once. Once. Ago. So let it go. Stop trying to turn the city back into something it used to be. Start focusing on what it could and should be.

Jacob C. Farbman, M.A., APR, serves as the director of communications for the New Jersey Council of County Colleges, where he oversees the Council's statewide internal and external communication programs for New Jersey's 19 community colleges. He is currently writing his dissertation to obtain his doctorate in education from Rowan University. In addition to his duties with the Council, Jacob has taught as an adjunct professor of communication studies at The College of New Jersey (TCNJ) in Ewing since January 2001, teaching Introduction to Communication Theory and Strategies of Public Relations. In 2005, TCNJ's chapter of the Sigma Pi fraternity honored Jacob with one of five Outstanding Faculty Awards. In December 2007, the Philadelphia Chapter of the Public Relations Society of America named him the region’s Outstanding Public Relations Educator.

Jenna Rose is a TCNJ ’14 alum who currently works as the coordinator of an afterschool program at the JCC of Staten Island. Jenna is entering her fourth summer working at Marvin’s Camp for children and young adults with special needs and her second year as Assistant Director. While attending TCNJ, Jenna was a mentor for the Career and Community Studies program. In the fall, she is attending Bowling Green State University of Ohio for her master’s in College Student Personnel and is interning in BGSU’s Disability Services office. Jenna hopes to educate TedxTCNJ viewer’s about working with children and young adults with special needs.

Kevin Michels teaches courses and conducts research on business law and ethics. His article, “Third-Party Negligence Claims Against Counsel: A Proposed Unified Liability Standard,” appears in the 2009 volume of the Georgetown Journal of Legal Ethics. His article, “Internal Corporate Investigations and the Truth,” which analyzes the obligations of counsel who conduct internal corporate investigations, appears in the 2010 volume of the Seton Hall Law Review. For that article, he won the Bright Idea Award, which recognizes outstanding business research articles published by faculty at New Jersey colleges. His most recent article, “Lawyer Independence: From Ideal to Viable Legal Standard,” appears in volume 61 of the Case Western Reserve Law Review. In the fall, he will teach the Legal and Regulatory Environment of Business. In the spring, he will also teach Business Ethics and Corporate Social Responsibility.

Mela Stevens is a nutrition and wellness coach, consultant and writer focused on self-care and self-inquiry, to assist in leading an extraordinary, purpose-driven life. She works with private clients and groups throughout the country. Mela believes that every day should have some joy, fun and service in it. And, if there’s a will there’s a way. She is excited to be part of this Ted X conference in order to share some of the thoughts on how we can consciously connect, providing all of us with support to move forward and live our potential.

Moses is a senior Sociology major and a soon to be graduate at The College of New Jersey. By friends and acquaintances, he is best recognized for his range of interesting hobbies, which include beatboxing, breakdancing, knitting, and magic. Magic is one of Moses’s favorite hobbies by far. He was introduced to the art in the summer before his freshman year at TCNJ, and he has been passionate about learning magic ever since.

Perry L. Shaw III is Co-Founder and Executive Director of A Better Way Inc., a non-profit reentry and community based company. A Better Way is an organization which specializes in helping community members find a better way to live. A Better Way noticed that youth at risk for incarceration and previously incarcerated individuals and their families have the least job training and the lowest rate of employment. Individuals and families have found resources and support from A Better Way. Mr. Shaw is currently the Chairmen of the Mercer County Reentry Taskforce, a former Board Member of Habitat for Humanity of Trenton and currently serves as a Commissioner for the Trenton Parking Authority. He has been married to his lovely wife Jennifer for nearly a decade and is the proud father of two children Zoey & Perry IV.

Rebecca (Becky) Flores is a junior at The College of New Jersey graduating this May with a double major in History and Political Science. Becky was born and raised in Toms River, NJ where she is actively involved in community service projects and volunteering on political campaigns. Since arriving at TCNJ, Becky has established herself as a lead tutor for political science statistical analysis, interned at The Republican State Committee, and earned membership into honor societies including Phi Beta Kappa and Pi Sigma Alpha. Outside of school, she holds The Guinness World Record for the largest private collection of Coca-Cola memorabilia and spends her summers as a supervisor of supply and vendor management at a local amusement park. Recently, her political science thesis on researching the electoral merits of gubernatorial elections was selected to represent all of New Jersey's undergraduate institutions and their student research programs to members of Congress.

When it comes to creating and running successful casual dining concepts in the city of Trenton, T.C. Nelson has skill, experience, and the luck of the Irish on his side. Along with his sister and brother, he developed, owned and operated the original Trenton Bagel until 2003 - and simultaneously ran a bustling cafe at the NJ State Museum. After working in finance for a few years following the sale of those businesses, Nelson was ready to return to the capital city, roll up his sleeves, and open a bar/restaurant that would serve as a Trenton's gathering place. In late in 2010, he set his sights set on 449 South Broad Street, having had a vision for the space for years. Nelson's longtime friend and property owner, Roland Pott, issued him a challenge and in just three months, doors opened to the public. Nelson is responsible for the daily operations and entertainment bookings at Trenton Social.

B.S. in Biomedical Engineering, with mechanical concentration, class of 2015 at The College of New Jersey. His interests are in biomechanics, mechanical design, physiological instrumentation and analysis. His strengths are CAD modeling/drafting and computer programming. His hobbies include playing guitar, training Brazilian Jiu Jitsu, and woodworking. Both his education and his interest has aspired him to explorer the fields to mechanical/medical engineering.