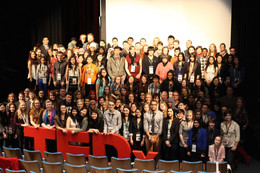 Redefining Normal. TEDxYouth@Edmonton is about young people making a difference in our community and beyond.

Dedicated to serving his community, Alex MacRae-Korobkov is not afraid to express his own passions and to help make others’ dreams a reality. Currently a grade 12 student attending Strathcona High School, Alex is the Co-Founder and Executive Director of the Alberta Youth Council on the Environment, the Operations and Research Lead for the Student Voice Initiative, Vice Chair of the City of Edmonton Youth Council, and a Founder of the Edmonton-based youth art collective Absurd Collective. However, just two years ago he lived a drastically different life, suffering from major depressive disorder and chronic insomnia that affected him in a myriad of diverse aspects of his life.

A passionate learner and inspired at Queen Elizabeth High School, Alexandra Slugoski is new to the world of computer science and robotics. She strides to spark and support more interest in technology, especially young women.

Ashley joins us from Victoria and inspiring youth all over British Columbia.

“Incompatible with Life” was the label given to Brandon Bosma at birth. Born with a genetic condition called Mosaic Trisomy 18, learning and normal milestones became huge challenges. These obstacles, however, did not prevent him from becoming a strong advocate and speaker for the International Trisomy 18 &13 community. His website and Facebook page bring hope to families worldwide. Brandon is an avid volunteer in his community. He is a winner of the Enbridge Famous Five Award, Vimy Pilgrimage Award, and the Pride of Strathcona award.

Edwina Liu started her journey into scientific innovation in tenth grade; with the goal of alleviating problems within the safety and efficiency of current mobility assistive devices, she helped design an improved rollator that prevented back strain. Later in her grade 11 year, she conducted a biology research project, discovering the synergistic effects of metformin and fluvastatin on prostate cancer. This project won her a gold medal and the Best Senior Health Project award at the 2014 Canada Wide Science Fair.

Committed to the power of the youth, Jamie Dublanko is determined to fight for those whose who are too often unheard. An avid student leader for the Centre for Global Education, environmental activist, and dedicated to Queen Elizabeth High School’s leadership program, she was named as one of Alberta’s ‘Top 30 Under 30’ by the ACGC and selected to be a Canadian youth delegate at the Conference of the Youth on climate change in Lima, Peru. Between procrastinating about which Netflix show not to watch and debating politics, you can find her writing white papers culminating national youth perspectives or perhaps preparing for a TEDx talk about the trending “junk-food” citizenship, and what it means to the global community.

Jennifer Galm, a grade 11 student at J. Percy Page High school, is an avid theatre-goer and dreamer. While keeping up in her studies, she is a Cappies critic, Arts Chair of the Student Union Council, writer for the Millwoods Mosaic, member of her school’s NAIT Culinary Competition Team, instructor of a Student Drama Club, Lead Editor of J. Percy Page’s Yearbook, a chorister in the Edmonton Youth Choir, and an actor in her school’s musical. Jennifer is constantly involved in school, art, and leadership activities; striving to be a positive force for youth involvement.

Jessica Wickware began her journey into scientific research in 2012 as a high school volunteer in the Derda Research Group. Initially working on a project involving antibiotic resistance in portable culture devices, she later began studying drug resistance in breast cancer cells cultured in paper (a 3D surface). This latter project won her first prize at the regional Sanofi Biogenius Challenge, and in May 2014 she travelled to Ottawa to represent Alberta in the national competition. A graduate of the French Immersion program at Harry Ainlay High School in 2014, Jessica is pursuing first-year studies at the University of Alberta, where she continues her research in the lab.

Johannah Ko, while interested in many topics, is hardly an expert on anything. She is a mediocre baker and average student. Her passion lies with people of all sorts. Life is hardly a linear story; rather, more of a mapping process, discovering and backtracking and establishing lines that gain shape through experience. She seeks to understand these maps, to hear what people have to share about themselves, and to explain a bit of the history that makes them who they are.

Megan Klak has always been a passionate storyteller. Through her volunteer work with Touchmark, a retirement community, she has interviewed and written legacies for many residents. Striving to keep memories from being lost, Megan was named Touchmark’s volunteer of the year in 2013, and for her efforts was interviewed by CTV, CBC, CBCradio and the Edmonton Sun. A grade 12 student at Archbishop MacDonald, Megan is a co-editor of the school newspaper, a co-leader of writing club and a member of Cappies.

Sacha Russo is a seventeen years old, grade twelve student from Austin O’Brien Catholic High School. She is very passionate about music, especially singing, playing guitar and writing. She has been playing guitar for ten years and singing for even longer. She also plays the bass, percussion and ukulele and sings in the extracurricular rock band program that runs after school. She has been accepted to Dalhousie University for next fall and plans to continue playing while attending school there.

From childhood, Sauleha Farooq has not fit into any box, despite the overwhelming pressures all around her to conform to a pre-made pattern. Finding her voice as a young, Muslim Canadian girl – Sauleha has always resisted stereotypes from all sides. A homeschooler from preschool to high school, Sauleha learns from doing and acting. She is a speech and dramatic arts student and loves to bring literature to life. As she begins her education at the University of Alberta in the Faculty of Science, she is concerned about the way world leaders seem to be forgetting important lessons from history.

Born into a multicultural family, with ties to many countries around the world, an advocate for multicultural tolerance and understanding, Seeon Smith is a grade 12 student at Austin O’Brien High School. He is Captain of the Austin O’Brien Crusader Senior Football team and a University Of Alberta Golden Bear Football Recruit. He is an active member of his school’s Model United Nations Debate team, and has worked in partnership with local politicians to help better his community.

Victoria Chiu is an avid purveyor of the Internet with a keen interest in publishing and digital media. As an editor of Archbishop MacDonald High School’s newly digitized newspaper, she pitched and spearheaded the transfer from print to blog post; she also plays an integral role in the circulation of student news with the rest of her team, incorporating elements of all areas of the school community into articles with the aim of bringing the school community closer together. As an editor, she edits and copyedits all articles for the paper and assists in its management, planning, and scheduling. In addition to her newspaper duties, Victoria is editor-in-chief of her school’s yearbook, a dedicated member of both the school’s writing club and its graduation committee, and a regular attendee at its anime club screenings.

With an eager mind for human compassion, scientific vigor, and being a new member of Canadian society, Yejun Hong is a thoughtful and studious grade 11 student at Old Scona Academic High School. As an enthusiastic swim athlete and the executive of the school’s Amnesty International club, he also volunteers with Sherwood Park Elderly Care and the Strathcona Community Hospital. Yejun constantly strives to bring a smile to people’s faces, since happiness is paramount to life itself.