Theme: We create our own path 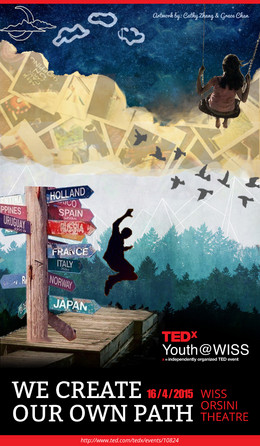 The theme of the 2015 TEDx Youth @ WISS event is “We Create Our Own Path”. The theme is intended to generate discussion on ideas such as innovation, education, honesty, integrity, fear, justice, humanity and peace.

WISS dance company have worked through various choreographic tasks, from the facilitated to the didactic, to unleash and discover a new path of movement and dance performance.

Diana Yin is an entrepreneur who recently started MettleSpring, a company founded on a vision that all individuals can pursue their professional passions and employ their abilities to make a positive and meaningful impact on society. Prior to coming to China in 2011, Diana was a partner in a high-growth management consulting firm. Combined with her more than twelve years as a veteran consultant, Diana spent much of her non-client time mentoring junior staff and building organizational capacities. She also took time off to become a full-time writer, and was formerly represented by the late literary agent, Elaine Koster. Her first novel is about a multi-generational search for truth and forgiveness, set against the post-WWII turbulence of U.S.-China relations. She has been published in the Wall Street Journal, and, up until last year, wrote the "Have you Ever Wondered Why" series for Shanghai Family magazine.

Joanna was born in China and moved to Canada at a young age. After spending six years in Canada, she returned to China when she was 13, and has been attending international schools ever since. This is her first year in the International Baccalaureate, and the idea for her TedXyouth@WISS talk had stemmed from her tenth grade Personal Project, which revolves around photography. In Joanna’s spare time, she enjoys playing mediocre ukulele music, reading books in a supine position, and capturing photos of whatever she finds enticing. She currently leads a mundane life and hopes to see more of the world firsthand. Also, she will attempt to make jokes that resemble those made by an elderly grandparent and she will laugh at her own jokes, too; it’s an epidemic in the teen society.

John Cucinello was born in Brooklyn, New York in 1956. He received a BA in English Literature from St. Thomas Aquinas College in 1981 and a Masters of Science in Education (reading) in 1994 from Long Island University . He has taught in the Bronx Public Schools for 11 years, and Yonkers, New York (5) years as well as (2) years in Saudi Arabia. John has PYP, DP and MYP experience. John speaks Spanish and English and has worked as a professional storyteller performing oral retellings of Homer’s The Odyssey.

At the age of 9 Mac was inspired to send soccer balls to kids in war zones round the world. With a little help from his family, Mac has achieved something quite astounding. In the past 2 years Mac has built a website; raised funds; arranged for the Australian soldiers to take soccer balls to Afghanistan; met the Governor of Queensland; delivered soccer balls to the children of refugees in Australian detention centres, as well as Cambodia, Zimbabwe, Uganda, Fiji, Vanuatu, the Solomon Islands, Nepal and the Maldives. Mac is a leader in the making. He spends his free time writing letters asking for support and speaking at events to raise money and awareness of the plight of children who have not had the same opportunities as him to play sport. Mac has recently completed speaking tours of India and China. As a guest of the Rotary, Mac has spoken to 33 schools and over 11,000 students about why he thinks soccer balls can be an instrument for peace.

Quinten Doornbos is of Dutch nationality and has lived in The Netherlands for nine years until he moved to China at the age of 9. He is currently fifteen years old and is in his 6th year at the Western International School Shanghai (WISS). Living in an expat community, he is exposed to new people and new experiences daily. He really enjoys studying at WISS and learning about different people and cultures. His mother-tongue language is Dutch. However, he is fluent in English and speaks Chinese and Spanish at a conversational level. He was inspired to give a TEDxYouth@WISS talk about technology because it is of great interest to him and because he has always idolized people that give interesting TED talks.

In February 2000 Tristan moved from his English village to teach English in an equally small Chinese village. Since then Tristan and China have changed quite a bit: he has worked in Afghanistan and the middle east, completed an MA in Chinese politics, spent 3 years studying and working in Beijing, gained an MSc in Environmental Technology and now runs the Shanghai office for Carnstone Partners, a London-based sustainability consultancy. Tristan develops practical sustainability projects and strategies for international brands’ supply chains. This has included establishing a sustainable supply chain programme in East Asia for a large pharmaceutical company, managing labour rights risk at one of Shanghai’s largest construction sites and working with UK retailers to develop community partnerships with Asian suppliers.

Vicky Bela is a fifteen year old from Russia. She was born in freezing Siberia in the winter, but moved to China when she was one and a half. She lived in a few places before moving to Shanghai when she was five. Vicky is fluent in English, Chinese, and occasionally Russian. Her hobbies include singing, songwriting, playing guitar, reading (Vicky has owned an estimated one thousand books in her lifetime), creative writing, and spending copious amounts of time on the Internet. She is an MYP student at W.I.S.S, where she has been studying for the last four years. Vicky hopes to study an Applied Science in university. Her talk was inspired by the hardships she sees around her from people not thinking that they are good enough to do certain things. Her hope is to influence people to forget about how society thinks they should act, and follow their dreams.