Theme: Be yourself, the world will adjust 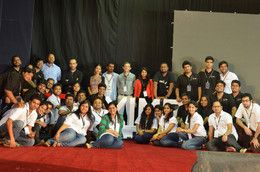 TEDxXIMB shares the same passion and vision as TED: communicating ideas in an inspirational way.It aims to develop a consortium of high-power ideas across disciplines and technologies to inspire people to think and take actions to help create a better future. We have been granted a licence by TED to lay the foundation of TEDxXIMB in 2012, as a means and opportunity to reach out to more people throughout the nation and to carry forward the fire ignited by ideas.

Founded in 1975, Orissa Dance Academy runs under the guidance of Guru Aruna Mohanty. The performing members of the Academy will be conducting the Gotipua Dance at the upcoming event. Gotipua is an ancient dance form, native to Odisha. In Odia language, “Goti” means “single” and “Pua” means “boy”. Traditionally performed to please and sing praises of Lord Jagannath and Lord Krishna, the dance is performed by young boys only thus giving meaning to its name. The young boys dress up in female attire for the dance wearing their traditional dress "Kanchula". Gotipua dance form took shape in the 16th century and saw widespread acclaim under the Bhoi Dynasty. It is often called the predecessor to the currently prevalent Odissi classical dance.

A college dropout, Akshaya worked as ahotel receptionist, plate boy, waiter, NGO volunteer, customer care executive, insurance seller, data entry operator, merchandiser and store manager; before combining his love for books and travelling to co-found - Walking BookFairs, India’s first organised outdoor bookstore and Odisha's first bookstore-on-wheels. Extremely passionate about life and work, Akshaya believes that each of us have a story waiting to be shared with the world. His vision is to take books to the farthest corner and the smallest village of Odisha to make them easily accessible to one and all.

Deepak Gopalakrishnan a.k.a Chuck is a digital marketing professional from Mumbai. An alumnus of MICA, he currently heads planning for Indigo Consulting, the digital wing of Leo Burnett India, where he blends his passion for the Internet with MS PowerPoint. He is passionate about sharing his experience with the next set of marketers and frequently takes digital marketing classes at premier B-Schools. The marketer by day turns into a content developer by night, having drawn cartoons and written articles for a variety of publications and genres ranging from political (Sify, Niti Central) to cricket (Cricinfo, Sportskeeda); from education (Pagalguy) to music (NH7). He has also performed B-school-centric stand-up comedy acts at a number of prestigious institutions across India. His passion does not stop at marketing or cartooning and extends onto a whole plethora of subjects including cycling, trekking, rock music, re-reading the works of PG Wodehouse and travelling.

Inir Pinheiro is the co-founder and Managing Director of Grassroutes, a company which improves livelihood in villages through hospitality services. His mission is to create 1 million livelihood opportunities across rural India by 2020. His work and action has already won him several awards and public recognition such as the Karamveer Puraskaar for Social Justice and Citizen Action in 2008; fellowship by Foundation for Youth Social Entrepreneurship in 2009-10. He has also been featured by CNBC Young Turks and Outlook Business. Inir Pinheiro did his MBA in Rural Management from Xavier Institute of Management, Bhubaneswar after graduating from St. Xavier’s College in Mumbai.

Keshav Dhar is the founding member of the globe-spanning intercontinental progressive rock band Skyharbor, and a highly sought after record producer for independent artists from India and around the world. Starting out with nothing more than a seed for a song in his head, Keshav developed his own unique and entirely self-taught approach to creating and releasing music with minimal financial investment, by harnessing the power of the Internet and social media. With just over half a decade of experience, he has already been the recipient of several prestigious awards from Rolling Stone Magazine including their 2013 Producer of the Year award, in addition to being nominated for a Golden God Award in the UK in 2014 for Skyharbor's meteoric rise in the global rock music scene.

Michael Burns is an American living in Mumbai for the last three years. He works for an American university, teaching through their online learning program; leading and designing courses in public speaking; film theory and communication. He is also the director and founder of Tall Tales, Mumbai's premier live storytelling event series, which performs every three weeks and showcases personal true stories told by the people who lived them. In addition, he's the creator of the Tall Tales Experience, a monthly, in-depth workshop that is an extension of Tall Tales and allows for a closer inspection of the details of great storytelling. Michael Burns holds a Ph.D. in documentary history from the University of Birmingham, United Kingdom. He is also a playwright, actor, editor, and filmmaker having directed five feature documentaries over the past ten years. His work has been seen in theatres and on television in over twenty countries.

A gypsy at heart, Satabdi spends her time running after her four year old, drinking tea and driving a hand painted van full of books through sleepy towns in Odisha. As the co-founder of Walking BookFairs, India's first organised outdoor bookstore and Odisha's first bookstore-on-wheels, her desire is to bring a change in the world by the powerful medium of books. She strongly believes that books have the power to open one's mind. Sadly books have not been able to reach enough people and have remained confined to certain elite spaces. Thus, through Walking BookFairs she wants to liberate books from all confines and bring them out of conventional bookstores to the public spaces, footpaths,roads, and bus stops where the common man could have the opportunity to look, feel and touch a good book and take it home at an affordable price. Satabdi holds a postgraduate degree in Journalism and has donned several hats including those of a copywriter, freelance writer and photographer.

Tanaya Patnaik is an Executive Director at Eastern Media Limited, Odisha’s largest media conglomerate that owns and operates Sambad, Radio Choklate and Kanak TV. Tanaya Patnaik also worked as the Curator of 'The Street Store’ in Bhubaneswar - the world’s first rent free, premises free, pop-up clothing store where the homeless and the poor can pick clothes of their choice donated by people without paying anything. The concept was first mooted and executed in Cape Town in South Africa and later spread to other parts of the world. Bhubaneswar was the first city in India to host The Street Store.