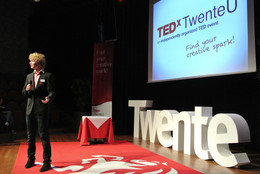 The University of Twente is a University of Technology, but also offers behavioral sciences.
For our event, we have invited from all kinds of disciplines. They all have one thing in common: They had a 'Creative Spark', which let them do what they have achieved.
Our speakers have shared their Creative Spark with the audience!

Miyoki is a Spanish singer/songwriter mainly specializing in Electronic Dance Music. Her vision is to share stories with the listener, to try to transform tiny moments of powerful emotion into a song. Fragments of time caught in melody. She is also a student at the University of Twente.

In the Netherlands we have two female SVH masterchefs, one of which is Angelique Schmeinck. Her domain of expertise is not limited to the kitchen; she writes, presents, entertains, conducts research, inspires, advises… all about taste.

Dennis Doubovski is a Twente University graduate. He started and participated in half a dozen student related web sites which are being used by thousands of students every day. Among others, CampusSearch, Flatlijst, CampusWiki and SamenvattingenWiki.

Emile Nijssen is a student of the University of Twente. His passion is to create useful technology. The ‘eetlijst-whatsapp’ tool and the ‘Raad de studie’ game are examples of his work. His latest creation is Homey, an innovative smart-home device that lets you control all kinds of smart devices in your house.

Giels Brouwer is a football addict and came straight out of college when he founded his own company SciSports with two of his friends. He noticed that an incredible amount of money was wasted on player transfers at professional soccer clubs because their decisions were not supported by objective facts. With his company, he introduced big data to the world of soccer scouting.

Maarten den Braber is an expert on the subject of Quantified Self. This is a movement to use technology in our everyday life to acquire data on our behaviour.

Merijn Bruijnes is a PhD student Human Media Interaction at the University of Twente.

Peter-Paul Verbeek is a Philosopher of Technology. He is a professor at the Philosophy of Science, Technology and Society department and president of the Society for Philosophy and Technology. After Veni and Vidi, this year he has received the Vici-grant worth 1.5 million euros for his research on the intertwining between human existence and technology.

Robin Koops studied in Enschede, before founding his own company, Inreda Diabetic. Nowadays, he is well known in the field of Technical Medicine and Biomedical Technology, as he and his team created the artificial pancreas.

Thomas Meijer Is a Molecular Biology & Biotechnology student at the University of Groningen. With eleven other students, he started a project tackling a modern problem with the aid of synthetic biology.