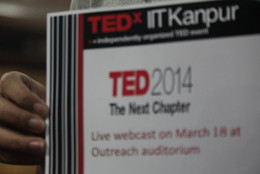 In the spirit of Ideas worth spreading, TEDxIITKanpur organized TedxIITKanpurLive on 18th March, 2014 at Outreach Auditorium in IITK campus, keeping in line with the institute’s stated policy of supporting creative innovation and dynamic ideas. The event was live webcast of TED2014, Vancouver, Canada: The Next Chapter on 30th anniversary of TED.

Being a supreme Techno- management college of India, IIT Kanpur boasts of most intellectual brains. So, we do feed the brains with the best. TedxIITKanpurLive was launched to promote ideas that can inspire the leaders of tomorrow who have the power to change the world. It served the purpose of raising the enthusiasm for the upcoming, much awaited TEDx event in coming semester. It featured five 18-minute speaker sessions from:

Edward Snowden: Here’s how we take back the Internet

Hugh Herr: The new bionics that let us run, climb and dance

Chris Hadfield: What I learned from going blind in space

We were happily surprised with so many enthusiastic TED fans that wanted to watch the TED simulcast! The event was an informal viewing session and anyone was free to stay for one talk or entire session. It had a great response. About 72 attendees were present. The webcast was followed by break were attendees can discuss with each other and get some snacks and drinks. The main idea was to emphasize the importance of possessing the right attitude in order to be successful in life. Indeed, as the speakers pointed out the difficulties/challenge in life, but also the ability to keep pushing ahead in the face of difficulty. We all went back with some good thoughts and learnings definitely!