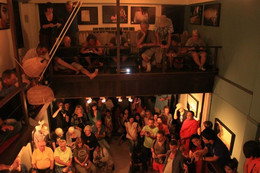 TEDxChiangMaiSalon events are smaller TEDxChiangMai events throughout the year between the main annual TEDxChiangMai events every September. Each TEDxChiangMai Salon will have a different theme. The 8 February event will be on "Photography for Humanity" and is about passionate photographers talking about humanitarian work, the powerful impact photography has on the world and sharing their stories of overcoming obstacles in their most inspiring and honored art of work. The viewing of several TED and 1-2 TEDx talks will be followed by an informal discussion. No live speakers are currently planned but if you are interested, please contact us.

We will show the following videos of TED talks
How photography connects us - David Griffin, Formerly the director of photography for National Geographic magazine talks about how photography connects us to our world and how photos have the powerful ability to tell ours and others stories. David Griffin works with photographers from around the globe and has been honored with: The hearts collegiate photojournalism Awards, University of Missouri's pictures of the year competition, National Press Photographer Association and more. In this talk he shares powerful images and stories about life and the work behind the photographs. http://ngm.typepad.com/editors_pick/david-griffin.html

Use art to turn the world inside out - JR the TED Prize awarded street graffiti and photographer talks about his work and art. The French artist states that the street is "the largest art gallery in the world." Using public walls as canvases he fly posts his large black and white photographs. Some of his famous works are: “Face2Face,” a project about showing beyond what separates Israelis and Palestinians and “Women are Heroes,” introducing women who faces death in their everyday environment and trying to get closer to the human being. http://www.jr-art.net/

The silent drama of Photography - Sebastião Salgado Shows astounding images about the world's forgotten people and places, it's his latest work called Genesis. A talk with beauty, passion and death. Sebastião Salgado is a social documentary photographer and a photojournalist, he’s been traveling in over 100 countries for his photographic projects and for his accomplishments he's been receiving major photographic prizes such as The Royal Photographic Society's Centenary Medal. http://www.photography-now.net/sebastiao_salgado/portfolio1.html

Photos that changed the world - Jonathan Klein talks and show iconic images and how they affects generations. He's the Co-Founder of Getty Images Inc, a global media company and was named number one on Americans photo's list of the 100 most important people in Photography. http://www.gettyimages.com/

The power of photography to change the world - Reza Deghati talks about the power of visual media have to affect social changes and how it can change ones perspective of humanity. Reza Deghati is a photojournalist who has traveled the globe for National Geographic Magazine and founder of a non-profit organization that educates and empowers Afghan women and children through media. Reza has won several awards for his work such as: The Lucie Award, UNICEF Hope Prize, and Missouri Honor Medal. http://rezaphotography.org/ http://www.youtube.com/watch?v=vjc6LO22hiA