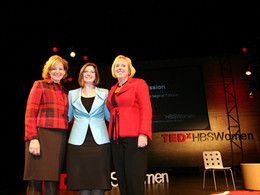 TEDxHBSWomen will enable us to connect with a powerful group convening to learn how to bring necessary solutions to some the world's current challenges. Focused on invention, TEDWomen provides us an opportunity to learn about some innovative thinking of women with wide ranging expertise. TEDxHBSWomen is part of the Be Well, Lead Well initiative at HB. We believe the experience will be helpful as we collaborate here to invent new ways to bring wellness, health, leadership and power together. Be Well, Lead Well is an initiative at Hathaway Brown designed to help girls and women reimagine leadership, expanding the definition of the term beyond titles and rank. Our understanding of leadership is expanding to reflect a world that is hyper-connected and rapidly changing, and girls today want to become intentional leaders of their own lives while working to make the world a better place. Addressing HB students’ needs as emerging leaders requires immersing them in a culture that helps girls imagine and approach leadership work with new possibilities in mind. As part of our exploration of these themes, we are hosting a number of conversations to discover more about achieving success that includes a sense of well-being.

Amy G. Brady is Key’s Chief Information Officer, leading Key Enterprise Technology and Enterprise Operations functions. She also serves on the company's Executive Leadership Team. Previous to joining Key, Brady served as Chief Information Officer, Enterprise Technology and Operations, at Bank of America. In this CIO role, Brady was accountable for technology and operations delivery to critical enterprise functions including Finance, Risk, Human Resources, Marketing, Legal and Audit. She was accountable for ensuring application performance, availability and currency as well as building and driving technology strategies and roadmaps to enable these enterprise functions. In addition, Brady's organization was responsible for managing priority initiatives and ensuring effective design, improvement and implementation across people, process and technology change.

Rebecca O. Bagley is President and Chief Executive Officer of NorTech, a technology-based economic development organization working to revitalize Northeast Ohio by accelerating the growth of regional innovation clusters in advanced energy, flexible electronics and water technologies. Under her leadership, NorTech connects small, medium and large companies and universities for business, funding and research opportunities that create jobs, attract capital and have long-term positive economic impact. Ms. Bagley connects with regional, state and federal government leaders to raise the visibility of Northeast Ohio's technology assets, position the region as an innovation hub and attract resources. Before joining NorTech in July 2009, Ms. Bagley served as Deputy Secretary for the Technology Investment Office of the Pennsylvania Department of Community and Economic Development (DCED). In that capacity, she was responsible for the administration of several major state initiatives with a total of $79 million in yearly appropriations, and more than $1.7 billion in investments. She also managed the passage of $650 million for Pennsylvania's Energy Independence Fund. She previously served as Director of the Venture Investment for DCED and managed venture and real estate investment programs.