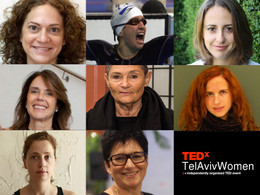 Thousands of women in more than 150 TEDx events around the world will take part in watching TEDWomen live from SF on Dec 5th.

Together with Abigail Tenembaum [TED speakers' coach] and Liat Aaronson [TEDxTelAviv and TEDxHolyLand co-organizer], Maya Elhalal-Levavi [TEDxTelAviv 2010, 2012 and TEDxLowerEastSide organizer] will host the live simulcast of TEDWomen at TEDxTelAvivWomen on the evening of Dec 5th.

TEDWomen 2013 will continue TED’s multi-year conversation about women’s work and lives, present and future. This is where Sheryl Sandberg gave the talk that lead to her book and movement ‘lean-in’ and where Jane Fonda gave an unforgettable talk about life’s third act.

On top of the great program coming in from SF, TEDxTelAvivWomen will feature a short program of local TEDx talks by Israeli Women.

This event is made possible by McCann Valley and will be hosted at McCann’s boutique cinema in Tel Aviv.

Malvina likes to break through boundaries prescribed by social conventions, traditions and most importantly, her own mind. She is fascinated by cultures and languages, and loves exploring the world by connecting with people, music and literature. She was born in Moldova, grew up in Israel, studied in Canada, the US, Japan and Chile and worked in Israel, Ukraine, Italy, Dubai and Vietnam. Malvina is the Head of Business Development for Africa at PayPal, helping connect sub-Saharan Africa to the global marketplace. Previously, she was a Vice President at Battery Ventures, a global VC fund, focusing on investments in e-commerce and internet applications. Malvina also worked with McKinsey & Company in Israel and Eastern Europe on projects spanning diverse sectors such as finance, chemicals, and the public sector. Malvina received an MBA from the Stanford Graduate School of Business and a BA from Princeton University in Public and International Affairs with a diploma in Latin American Studies. She loves foreign languages, and is fluent in English, Hebrew, Russian, Spanish and Portuguese, with good knowledge of Arabic, Japanese and French.

Artist and street-artist, Maya has accumulated an astounding track record. She has participated in dozens of exhibitions, and is currently showing her fifth solo exhibition in Jaffa-Tel Aviv. Among others, her works were exhibited in: Tel Aviv & Haifa Museums of Art, Herzliya Biennial, Art Basel Miami, Tokyo and New York. She is also a leading figure on the street-art scene, where she remains active parallel to the gallery and museum world - thus maintaining a direct and unhindered contact with the public. She is best known for her "Mind the Heart!" street project, in which red woolen hearts mark frames in the urban landscapes of Tel Aviv and many cities around the globe. In her past she was a field-medic in the army, led a rock band, written online music reviews and self-published a poetry book.

In brief, my work experience includes over 10 years of experience within the Israeli branding and advertising Industry, advising a wide range of clients with regards to their branding and communication strategies; holding various strategy roles at the McCann-Israel Advertising Group and for the past 4 years working as VP Strategy at OPEN, Total Brand Experience, branding and advertising agency.    Founded in 2000, OPEN consists of creative and strategy professionals, who specialize in branding.  Our vast client portfolio, includes various branding and advertising projects from innovative start-ups (Webydo, GooodJob, Slotomania, Graduway) to well known, established clients and companies such as: The Central Bottling Company (Prigat, Cranergy, Tuborg Brewery), Shilav, Bank Hapoalim, El-Al airlines as well as the Israeli Ministry of Foreign Affairs (Branding the State of Israel). I hold an MBA with a marketing major from IDC Herzliya, during which I have participated in the exclusive exchange program at the Wharton Business School, University of Pennsylvania. In addition, hold a BA, in Sociology and Communication from the Tel-Aviv University.

Originally from South Africa. Joined the Parents Circle - Families Forum , Israeli /Palestinian bereaved families for reconciliation, after my son David was killed by a Palestinian sniper . Wanted to do something to prevent other families from experiencing this terrible loss. Have been working on the ground both in Palestine and Israel and internationally , spreading our message of understanding for more than 10 years, My vision is to be part of the creation of a reconciliation framework to be an integral part of any future political peace agreement. I am the protagonist in www.onedayafterpeace.com a documentary which has been shown and has won prizes all over the world. The film took me to South Africa to learn lessons from the Truth and Reconciliation Commission as well as my personal journey with the man who killed my son.

Dr. Shula Recanati is a Managing Partner at GlenRock Israel, which specializes in capital investments in life sciences & technology. She leads the organizational development support, and serves as a BOD member of GlenRock's Hi-Tech portfolio companies. Shula holds a PhD in organizational psychology and has over 20 years of experience as an organizational development consultant. Shula is deeply involved in community activities, and is Chairperson of the Board of the Educating for Excellence foundation, whose mission is to enable talented children from underprivileged backgrounds to reach their maximum potential, complete their high school education with excellence, and become contributing members of society. Shula has been serving on the board of trustees at the Academic College of Tel-Aviv Yaffo, and recently joined the BOD of the Taub Center for Social Policy Studies in Israel.

The youngest Israeli Knesset member (age 28) and one of the organisers of the 2011 Israeli protest that brought half a million people to the streets, to live in tents and demonstrate for social justice. A former journalist and social activist.

is an Israeli champion Paralympic swimmer. Leibovitch is a three-time world champion, a five-time European champion, a holder of three world records (for the 100-meter and 200-meter backstroke and the 100-meter freestyle), and an eight-time Paralympic medal winner. In 2005, she was voted the 46th-greatest Israeli of all time, in a poll by Ynet. She lives in Ra'anana, Israel. 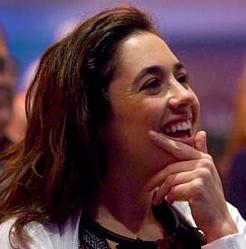