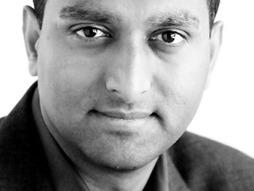 Femto-photographer
Website: Ramesh Raskar Website: Camera Culture Research Group
Photography is about creating images by recording light. At the MIT media lab, professor Ramesh Raskar and his team members have invented a camera that can photograph light itself as it moves at, well, the speed of light.

In 1964 MIT professor Harold Edgerton, pioneer of stop-action photography, famously took a photo of a bullet piercing an apple using exposures as short as a few nanoseconds. Inspired by his work, Ramesh Raskar and his team set out to create a camera that could capture not just a bullet (traveling at 850 meters per second) but light itself (nearly 300 million meters per second).

Stop a moment to take that in: photographing light as it moves. For that, they built a camera and software that can visualize pictures as if they are recorded at 1 trillion frames per second. The same photon-imaging technology can also be used to create a camera that can peer "around" corners , by exploiting specific properties of the photons when they bounce off surfaces and objects.

Among the other projects that Raskar is leading, with the MIT Media Lab's Camera Culture research group, are low-cost eye care devices, a next generation CAT-Scan machine and human-computer interaction systems.

“Though photographs in the near future will still be composed by people holding cameras, it will gradually become more accurate to say pictures were computed rather than 'taken' or 'captured.'” — Popular Photography magazine 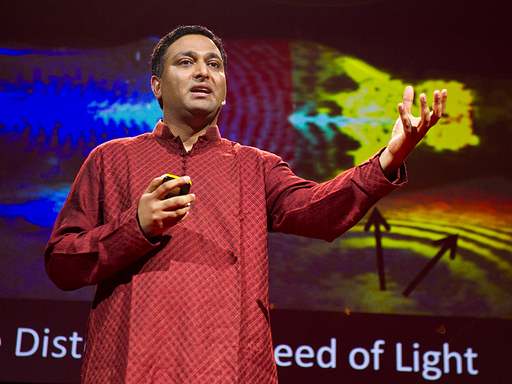 Imaging at a trillion frames per second

A 3D printed dress for the Paralympics, biodiversity in the heart of the city, and a camera that can read a closed book

As usual, the TED community has lots of news to share this week. Below, some highlights. Man vs. machine? It took Danit Peleg just 100 hours to print the dress worn by fellow TEDster Amy Purdy in the opening ceremony of the Paralympics in Rio (if that sounds slow, consider that it took her 300 […]

At TEDGlobal2012, Ramesh Raskar demonstrated his remarkable femtosecond camera, which can image a light-pulse as it travels through an object, or potentially see around corners. But Raskar’s projects go far beyond even that. After the talk, in a brief Q&A with host Bruno Giussani (above) he introduced NETRA, a simple attachment for a smartphone that […]