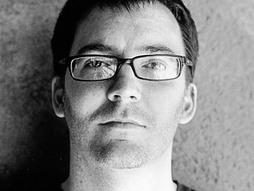 R. Luke DuBois is a multidisciplinary artist mining the intersection of art, culture and technology, often expanding or contracting perspectives or timespans to accentuate aspects of each work. As a musician, he has produced a spectrum of electro-acoustic works with a multitude of artists, including Bora Yoon, Bang on a Can and the Freight Elevator Quartet.

As an artist, DuBois focuses on exposing the long narratives created by arcs of data, in the same way that time-lapse photographs expose long swaths of motion in a single image. As a programmer, DuBois is co-author of Jitter, a software suite that allows real-time manipulation of video and 3D imagery.

DuBois teaches at New York University, where he co-directs the Integrated Digital Media program at the Tandon School of Engineering. His artwork is represented by bitforms gallery in New York City.

“DuBois is notable not only for his proficiency with digital technology, but also for his thoughtful layering of meanings relating to both the subjects in such works and the media used to produce them.” — Artspace, Feb. 7, 2014

Insightful human portraits made from data

Quiz: Can you match the president to the word chart?

Artist R. Luke DuBois explains the vision behind his presidential project -- and puts citizens’ knowledge to the test.

What one artist learned about America from 19 million dating profiles