Marine biologist, National Geographic Explorer and TED Fellow Mike Gil conducts field experiments and builds mathematical models to understand how marine ecosystems function. This understanding, he says, is crucial for humankind to build a sustainable future. Gil has led research around the world: from coral reefs in the Caribbean, French Polynesia and Southeast Asia, to "microislands" of plastic garbage, teeming with life, in the middle of the Pacific. Currently, Gil uses novel multi-camera systems in the field combined with computer vision technology to explore, at an unprecedented scale and resolution, how coral reef fish behave, socialize and affect entire coral reef ecosystems. Gil's scientific discoveries and his often unorthodox approaches have garnered significant national and international media attention.

In addition to being a National Science Foundation Postdoctoral Research Fellow at the University of California, Davis, Gil is also an avid and award-winning science communicator. As a self-described "science-hater turned scientist" from humble beginnings, he is passionate about diversity and inclusion in STEM fields. To this end, Gil founded and runs the nonprofit SciAll.org, which uses free online videos to bring mass public audiences along for the adventures that come with a career in science. Through his research and outreach, Gil aims to deliver a timely message to humanity: science is exhilarating, accessible and in the service of all. 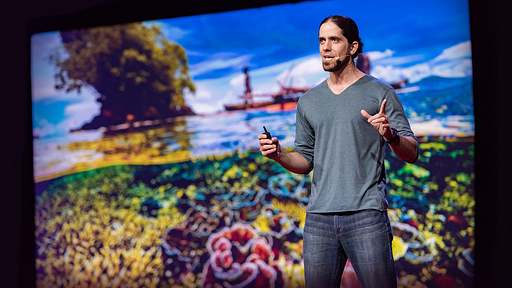 Could fish social networks help us save coral reefs?

Inside the surprising social networks of fish (yes, fish)

Just like humans, fish have social networks too — and these could be key to helping protecting them and the coral reefs where they live, says marine biologist Mike Gil.