Nobel Laureate Kailash Satyarthi has been leading the global fight against child slavery for over three decades.  As the founder of a grassroots nonprofit, Bachpan Bachao Andolan, or Save Childhood Movement, he has rescued more than 80,000 Indian children to date from various forms of exploitation from child labor to child trafficking.

Kailash’s work has involved organizing almost weekly raid, rescue and recovery missions on workplaces that employ and enslave children. Since 2001, Satyarthi’s has risked his own life to rescue these children and has convinced families in more than 300 Indian villages to avoid sending their children to work, and instead putting them in school.

Satyarthi’s has also managed to grab and retain the world’s attention on the problem. He organized the Global March Against Child Labor in the 1990s to raise awareness and free millions of children shackled in various forms of modern slavery. His activism was also instrumental in the adoption of Convention No. 182 by the International Labour Organization, a statue that's become a guideline for many governments on child labor.

In 2014, he and Malala Yousafzai were awarded the Nobel Peace Prize for “their struggle against the suppression of children and young people and for the right of all children to education.”

“Despite saving almost 80,000 children from child labor, and now adding the world’s most famous award to his name, Kailash Satyarthi has always relentlessly sought to do more.” — Ben Doherty, The Guardian 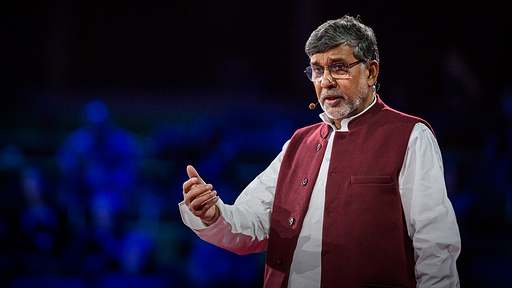 How to make peace? Get angry

Endgame: A recap of the emotional final session of TED2015

It is hard to believe that this is final session of TED2015. Luckily Session 12, “Endgame,” is our longest ever — with two full hours of talks that took us on a journey through the human experience, from anger to laughter and back again. Read a recap of these inspiring talks. An ode to anger. […]

“I’m urging you to be angry”: Kailash Satyarthi live at TED2015

“All my best ideas were born of anger,” says children’s rights activist Kailash Satyarthi. As the first speaker in the closing session of TED2015, Satyarthi shows how fury can be an underestimated power to make change. It’s the energy that’s informed his entire career — and led to his winning the Nobel Peace Prize in 2014. Says […]