David Merrill is currently the VP of Product at 3D Robotics, where he builds new, easy-to-use flying robots. He was formerly president and co-founder of Sifteo, a San Francisco startup spun out of his research at the MIT Media Lab. This research helped build an award-winning physical+digital play system and catalog of unique games. He also directed HW and SW on Sifteo products.

He is a human-computer interaction expert, frequent public speaker and aerial photography enthusiast. David's work has been featured by MoMA, the Disocvery Channel, Popular Science and Wired.

His main interest now is the Siftables project, the subject of his TEDTalk, on which he works with Jeevan Kalanithi. In another field of inquiry, Merrill is looking at ways to access digital information in the wider world, when we are away from a traditional computer.

A musician himself, Merril also has a deep interest in new musical interfaces. His Adaptive Music Controller is an instrument that learns its player (rather than the player learning the instrument). And working musicians should check out his AudioPint, a portable case that consolidates instruments, effects and audio processors into a gig-safe rugged housing. 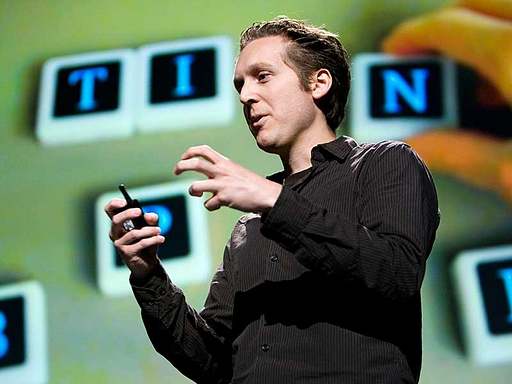 Toy tiles that talk to each other

-able, everyone’s favorite “can-do” adjective suffix, is enjoying a revival. 20-some years since its heyday, we’ve found it stitched to no less than six modern product names, deriving for them a certain adroitness that a lonesome noun mightn’t have provided. And two of these products, as it happens, have been demoed at TED. 1. Siftables: […]

On building blocks: exclusive interview with David Merrill on Siftables

David Merrill is a grad student in the Fluid Interfaces Group at MIT’s Media Lab. He and his fellow students in this group work on new technologies that give us more and better abilities to do things we want to do. At TED2009 he gave a demo of his main project, Siftables. Today the TED […]