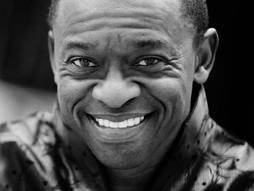 Clayton Cameron holds a unique title: Brush Master. That's because this percussionist prefers brushes to sticks, and has spent his career perfecting the art of brush technique. Cameron grew up in Los Angeles and started drumming at a young age on empty oatmeal boxes. After college, he moved to Las Vegas, where he was hired as the drummer for Sammy Davis Jr.'s big band. "It would be Sammy's tap dancing night after night that would inspire my brush playing," says Cameron.

During his tenure with Sammy Davis Jr., Cameron played with Dean Martin and Frank Sinatra. And, after moving to New York, he struck up a longterm friendship with Tony Bennett, and spent 15 years touring with the master. Cameron recorded 15 albums with Bennett, including his Grammy-winning Tony Bennett Unplugged.

Cameron has also worked with jazz legend Kenny Burrell, who encouraged him to teach at UCLA's Herb Alpert School of Music. In addition, Cameron released his debut album in 2012, Here's to the Messengers: Tribute to Art Blakey, and formed his own group, Jazz eXplosion. Cameron has also released several DVDs over the years as well as a book, Brushworks.

How I fell in love with the drums

By Clayton Cameron As a 5-year-old kid, I barely knew what the word rhythm meant. At least no one told me what banging on inanimate objects and creating my own little beats might be called. It was like rhythm chose me and I really had no say in the matter. My favorite elementary school pastime was tabletop […]