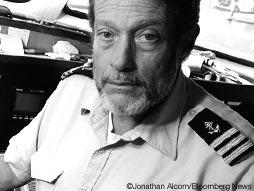 A yachting competition across the Pacific led veteran seafarer Charles Moore to discover what some have since deemed the world's largest "landfill" -- actually a huge water-bound swath of floating plastic garbage the size of two Texases. Trapped in an enormous slow whirlpool called the Pacific Gyre, a mostly stagnant, plankton-rich seascape spun of massive competing air currents, this Great Pacific Garbage Patch in some places outweighs even the surface waters' biomass six-to-one.

Moore said after his return voyage, "There were shampoo caps and soap bottles and plastic bags and fishing floats as far as I could see. Here I was in the middle of the ocean, and there was nowhere I could go to avoid the plastic."

Since his discovery, Moore has been analyzing the giant litter patch and its disastrous effects on ocean life. Through the Algalita Marine Research Foundation, he hopes to raise awareness about the problem and find ways to restrict its growth. He's now leading several expeditions to sample plastic fragments across thousands of miles of the Pacific.

“His findings have gone a long way toward educating the science community, if not yet the public, on the magnitude of marine pollution and its impact on life -- all life.” — Thomas Kostigen, Discover Magazine

What plastic item would you love to ban? 15 ocean experts (and TED speakers) tell us.

Yes, plastic straws are bad, but they’re just a teeny drop in the giant ocean of plastic we’re swimming in. Here are other everyday plastic objects that we could put on the discontinued list.

Chris Jordan (watch his TEDTalk) is on Midway Atoll with a team of artists to document a shocking result of our love of plastic: thousands of albatrosses who mistake floating plastic trash for food — and are starving to death. Midway is near the apex of the Pacific Garbage Patch (watch Capt. Charles Moore’s TEDTalk […]