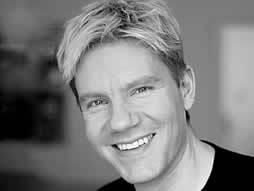 Global prioritizer
Website: Copenhagen Consensus Center Website: Bjorn Lomborg Book: How to Spend $75 Billion to Make the World a Be
Danish political scientist Bjorn Lomborg heads the Copenhagen Consensus, which has prioritized the world's greatest problems — global warming, world poverty, disease — based on how effective our solutions might be. It's a thought-provoking, even provocative list.

Bjorn Lomborg isn't afraid to voice an unpopular opinion. In 2007, he was named one of the 100 Most Influential People by Time magazine after the publication of his controversial book The Skeptical Environmentalist, which challenged widely held beliefs that the environment is getting worse. This year, he was named on of the "50 people who cold save the planet" by the Guardian newspaper. In 2007 he published Cool It: The Skeptical Environmentalist's Guide to Global Warming, further analyzes what today's science tells us about global warming and its risks. That same year, his next book Solutions for the World's Biggest Problems was released, which provided a summary of the greatest challenges facing humanity.

In 2004, he convened the Copenhagen Consensus, which tries to prioritize the world's greatest challenges based on the impact we can make, a sort of bang-for-the-buck breakdown for attacking problems such as global warming, world poverty and disease.

It begins from the premise that we can't solve every problem in the world, and asks: Which ones should we fix first? The Copenhagen Consensus 2004 tapped the expertise of world-leading economists, as well as a diverse forum of young participants; collectively, they determined that control of HIV/AIDS was the best investment -- and mitigating global warming was the worst. Lomborg summarized these findings in How to Spend $50 Billion to Make the World a Better Place. In spring of 2008, Copenhagen Consensus convened again, assembling over 55 international economists, including 4 Nobel laureates, to assess, prioritize and brainstorm solutions for the major global challenges of today, including conflicts, malnutrition, health, education and terrorism. In 2013, he published How to Spend $75 Billion to Make the Wolrd a Better Place.

Me: Help me, Bjorn Lomborg, I didn’t understand your new TED Talk. Bjorn: Sure, AMA

Danish political scientist Bjørn Lomborg focuses on using economic methods and data to prioritize the world’s problems. In 2005, he gave a TED Talk, Global priorities bigger than climate change, in which he challenged the audience to decide how they might spend $50 billion to solve the pressing issues of our time. Now he’s back, with […]

Have we made any progress since 2005? Bjorn Lomborg updates his classic TED Talk in a new talk at TED HQ

Bjorn Lomborg gave a mind-blowing talk at TED2005 on making big decisions about our global priorities. In it, he asked the question: If you had $50 billion, enough to solve either climate change or AIDS — which would you pick? A redditor who discovered the video just last week commented: “Um… isn’t there any opinion […]