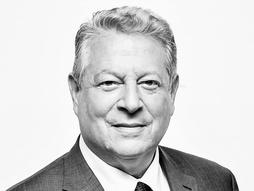 Former Vice President Al Gore is co-founder and chairman of Generation Investment Management. While he’s is a senior partner at Kleiner Perkins Caufield & Byers, and a member of Apple, Inc.’s board of directors, Gore spends the majority of his time as chair of The Climate Reality Project, a nonprofit devoted to solving the climate crisis.

He is the author of the bestsellers Earth in the Balance, An Inconvenient Truth, The Assault on Reason, Our Choice: A Plan to Solve the Climate Crisis, and most recently, The Future: Six Drivers of Global Change. He is the subject of the Oscar-winning documentary An Inconvenient Truth and is the co-recipient, with the Intergovernmental Panel on Climate Change, of the Nobel Peace Prize for 2007 for “informing the world of the dangers posed by climate change.”

“The only vice president ever to mock his stiff image by [imitating] a wax-museum figure, Gore turns out to be the best professor you never had -- easygoing, knowledgeable and funny.” — Rolling Stone 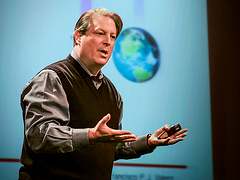 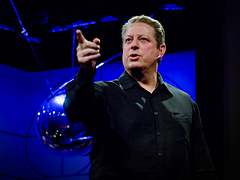 What comes after An Inconvenient Truth? 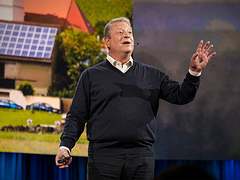 The case for optimism on climate change

Planet, Protection: The talks of Session 6 of TED2017

Polar ice doesn’t care who’s in the White House. It just melts. In the sixth session of TED2017, hosted by TED’s Head Curator Chris Anderson, we hear blunt talk on climate change — taking a 30,000-foot view from the clouds and examining some market-based solutions for cleaning the planet. Below, recaps of the talks from Session 6, in […]

10 years of changing views on climate change, in TED Talks

10 years of TED Talks show how the conversation around climate change has developed, from awareness-raising to dire warnings to a growing sense that we can actually do something about it.

Al Gore feels optimistic about climate change. 6 stats he shared at TED2016 that show why.

“I was excited to be a part of the ‘Dream’ theme,” says Al Gore as he walks onto the TED2016 stage. “But then I found out I was leading off the nightmare section.” He admits that what we’ve doing to our world is a nightmare, and that the consequences we’re seeing are quite scary: “Every […]