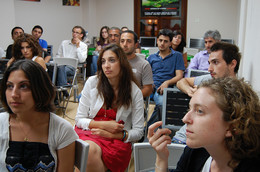 This second gathering was a success (The first session was on EARTH DAY, 22nd of April).

The same number of people as the first session attended (exactly the same! which is quite weird), 28 persons exactly in both sessions!!?? :)

The main theme of the session was: SIMPLE SOLUTIONS FOR A BETTER ENVIRONMENT.

We watched 4 TED talks:
1- John Doerr sees salvation and profit in greentech
2- William Kamkwamba: How I harnessed the wind
3- Sylvia Earle's TED Prize wish to protect our oceans
4- Graham Hill: Why I am a weekday vegetarian

But this time, what made it an even more successful session was the discussion part, we had plenty of discussion time, after each talk, and this debate brought many interesting insights.

One of the frustrating things that came up from some members of the audience, was "what can I, as an individual do? They did not believe that their individual actions can have an effect on the whole environmental phenomenon! They did not believe in the power of the
individual effort, they think that it is a "BIG, OVERWHELMING" thing, and they COULD NOT as individuals do anything about it!

After discussing how important the role of each of us is, the obvious talk to inspire these people was by excellence William Kamkwamba's...
It was so inspiring to them, that it completely changed their minds! At least this is what they said!

Another challenging thing in the discussions was the "throwing of responsibility entirely on the government and laws and official powers". These are people who think that it is more important to have people in political power solve the environmental issues, rather than
raise awareness amongst students, regular people like us, who can not do much about it, except car pool, change the light bulbs...

It was a little bit difficult to convince them that everything matters, that it is a chain where everyone does what he can do best to participate in this global movement. There are NGOs to take particular action in specific themes, there are political parties to try to
legislate and make laws pass, there are INDIVIDUALS that educate themselves and others on the issues, and there are sessions like these to raise awareness and try to spread the message as wide as possible, and ALL parts are equally important.

I personally believe in the importance of the ideas in order to induce action.