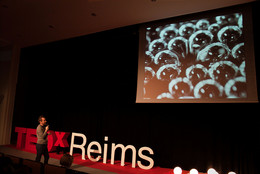 Our area is world famous for its vineyards, its Champagne and many other treasures. For its first edition, TEDxReims wanted to show that there are areas of skills and talents that contribute to make our region a dynamic and resourceful country.

Eight speakers each had fifteen minutes to present projects or ideas that have been recognized for the cultural added value and innovative they bring to Reims and the Champagne-Ardenne region.

Sandrine Brisset moved to Reims 15 years. After an administrative and commercial career , this mother chose in 2009 to resume her studies to live her passion and become coordinator of projects in sustainable development. She is now referring family part-time in a house of Reims and trainer neighborhood on ecological, social and economic issues in various structures. She started in parallel in the adventure of the social and solidarity economy by creating the first Local Exchange Trading System (LETS) of the city. Her will and perseverance demonstrated that , as she thought, we can actually help each other in Reims without money issue. As proof, the thriving local LETS and now has over 300 members. Beyond the economic issue , the development of social ties is at the heart of this system, engaged, as its founder, to improve the lives of all those who are involved.

Laurent Haug, Swiss entrepreneur born in Reims, observed since the 90s the impact of new technologies on business. Innovation consultant, lecturer at the University of Lausanne, founder of the Lift conference and Lift lab, editor of Wired UK, he has been honored twice as one of the most influential people in Switzerland (Update 2006 2011 Report ), won an ICT award and was named as one of the young Swiss entrepreneurs in 2011 top 20. He advises CEOs and boards on strategic decisions related to the digital world.

Remo lives and works in Paris, Reims and Lille. Clarinetist classical from training, he discovered contemporary and experimental music during his studies of philosophy and musicology. He keeps from classical music his taste for harmony and arrangement, and its appeal to contemporary music experimentation on the sound. Alongside his activities to the university (sound installations creations, live-electronic), he was introduced to electronic music in all its variety (hiphop, electronica, techno, bass music). He developed several musical projects with which he toured Europe to Brazil. He is currently preparing an album to Reims in the Highlife Recordings supported by the current music room Cartonnerie and the national center for musical creation Césaré . Accompanied by Renaud Collet improvising saxophonist and keyboardist Anthony Berquet Remo developed in this project a universe of electronic music, jazz, or experimental music.

After studying at the University Paris 9 and a Ph.D. from the University Paris 6 in 2000 on the "design groupware for collaborative knowledge management", Myriam Lewkowicz is now Professor at the University of Technology in Troyes, for which she steers the Scientific and Technological Program "E- Health". Her research focuses on the design of systems for social interaction and also goes well with the definition of innovative platforms for supporting existing collective practices through the study of new collective activities. For 8 years, her main application area is health. She is a member of the program committees of major conferences in Cooperative Work , Social Software and Human-Computer Interaction, and Vice-President of the Association MADoPA (Expert Center in Technologies and Services for Continued Autonomy in the Elderly at Home).

After an innovative doctoral degree in 2001 on a first approach to the physicochemical processes related to the effervescence of Champagne, Gérard Liger-Belair now leads the team Effervescence, Champagne and Applications at the University of Reims Champagne-Ardenne dedicated to the study of processes related to the formation and behavior of bubbles and foam in sparkling liquid. Author of numerous articles and academic work, he collaborates regularly with food manufacturers on many research topics related to effervescent properties of Champagne wines and carbonated drinks in general. It is also a recognized communicator actively involved in the dissemination of knowledge and extension operations on his research topic, through television programs, radio, and articles in national and international press.

With a multidisciplinary PhD in Computer Science and Linguistics, nothing predisposed Vincent became interested in meteors. Or shooting stars. There are still three years he did not even know it was the same thing. Yet he is from this year the only non-American winner of Charles P. Olivier Prize of the American Meteor Society. From Reims, he worked on the development of interactive tools for the general public to participate in research in astronomy. Last year, these tools have led to the discovery of four freshly fallen meteorites on American soil, helping to provide the material to better understand the world around us.

Maxime started programming at the age of 9 and created his first business at 15. He sold it when he passed his baccalaureate, and established the company GUEDJ with which he started, among others, the VDM website. Today he is the leader of entertainment in France with more than one and a half million visits per day. Since then, several international versions were born, but also books, comics and diaries, as well as a TV serie that was launched in September 2013.

Graphic designer, illustrator, artist, Anne-Sophie Velly is a former student of the ESAD. Her friend Maud Gironnay followed the course of the Ecole Estienne in Paris. They decided together to retype an old abandoned house in Crugny, close to Reims, and make an exhibition and dissemination of emerging contemporary art, but also a place of residence and trade for artists, in rural area. The “Maison Vide” is born in 2009. It is important for its founders to create direct links with the inhabitants of the territory in which they operate. To do this, they set up participatory projects and encounters between people and artists, and then open the exhibitions free to the public.

Graphic designer, illustrator, artist, Anne-Sophie Velly is a former student of the ESAD. Her friend Maud Gironnay followed the course of the Ecole Estienne in Paris. They decided together to retype an old abandoned house in Crugny, close to Reims, and make an exhibition and dissemination of emerging contemporary art, but also a place of residence and trade for artists, in rural area. The “Maison Vide” is born in 2009. It is important for its founders to create direct links with the inhabitants of the territory in which they operate. To do this, they set up participatory projects and encounters between people and artists, and then open the exhibitions free to the public. 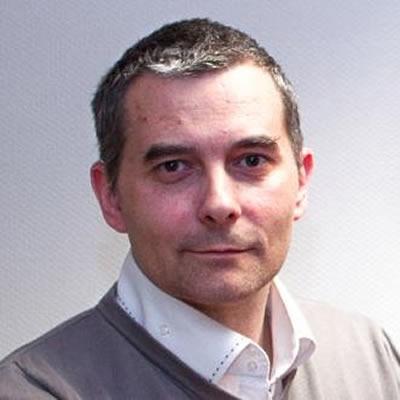