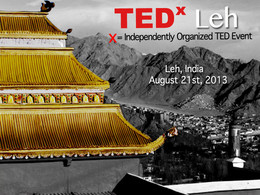 TEDx Leh would bring together Ladakh’s change makers along with pioneers in various fields from across the world, in a discussion which would focus on bringing positive change to the remotest parts of the country. We would also have with us people from other industries who have demonstrated successful development models in their fields and now feel it’s time to scale it up to also include the fringe communities which often get left out. Though the talks would be centered mainly on Ladakh and the issues facing the region, the solutions that would emerge from the event here would also be equally applicable to other secluded parts of India and the world, which are desperately trying to break into the development wagon, while also maintaining their cultural and demographic individuality.

Mr. Inderpreet Wadhwa is a serial entrepreneur who has built several successful technology ventures in the Silicon Valley in the past fifteen years. Inderpreet has done his undergrad in electronics engineering from GNDU, Punjab and his MBA in Finance and Marketing from the prestigious Haas School of Business, UC Berkeley. Inderpreet is a renewable energy enthusiast and has over 20 years experience building large scale infrastructure projects. Given his undergrad in electronics engineering, passion for solar power development (from back in California) and Indian government policy impetus around rural electrification, clean energy delivery to rural household through distributed solar power generation was the obvious choice. Inderpreet has relentlessly lobbied generation based incentives in solar sector through Clean Trade initiatives across US and India. He is passionate about rural electrification and energy security through clean energy sources.

From the lineage of Rev Yoseb Gergan, translator of the Bible into Tibetan and author of the cardinal book 'History of Ladakh' (in Tibetan language), Rev Elijah Gergan started his professional career in 1972 as a college lecturer in the Jammu and Kashmir Government. Later did his Theological Studies in South Korea. From 1982 onwards has been in the field of development in Ladakh with focus on education in Ladakh, both in Kargil and in Leh Districts of the region. With wide ranging interests in the fields of natural sciences, theology and comparative religion, education, development, mountaineering, he continues to serve Ladakh.

Stephanie Wolcott is associate director of the Kellogg Innovation Network at the Kellogg School of Management, a network of global innovators, and a proud member of 2041’s recent Antarctica expedition. Prior to KIN, she was principal manager for Alcoa Foundation, developing their global signature programming in environmental sustainability. Previously, Stephanie served as global manager, Corporate Citizenship for Tyco International and led the creation of Tyco’s first EHS report. Earlier in her career, Stephanie led CSR reporting for Fortune 100 clients at Edelman Public Relations and VSA Partners.

Venerable Bhikkhu Sanghasena was born in the remote Himalayan region of Ladakh - an ancient state located in the far north west of India, high on the Tibetan plateau. He was brought up within a deeply religious family, amongst people who followed the ancient Buddhist traditions and believed in peacefulness, guruji-1 humility and innocence as the natural way of life. At the age of seventeen he joined the Indian Army, where he developed a strong sense of personal discipline and responsibility. 1977 was a particularly significant year in his life, for this is when he felt the inner spiritual call and decided to leave the army. He left the mountains of Ladakh far behind him and became a committed disciple of the renowned Buddhist scholar and celebrated monk, Venerable Acharya Buddharakkhita Mahathera, the abbot of the Mahabodhi Society Vihara, Bangalore, South India. In 1986 Venerable Bhikkhu Sanghasena founded the Mahabodhi International Meditation Centre (MIMC) in Ladakh. For the past 25 years Venerable Bhikkhu Sanghasena has tirelessly and selflessly worked to provide high quality education and safe shelter for underprivileged children, first-class healthcare for the sick and needy, empowerment and literacy programmes for women and other socially disadvantaged groups, a caring home for the aged and destitute, and many other humanitarian services. The site for much of Venerable Bhikkhu Sanghasena’s humanitarian and spiritual service work has been the 200 acres of moon-like desert that now form the impressive backdrop to the main Mahabodhi Devachan campus in Choglamsar, Ladakh.

Jigmet Takpa is Director of the Ladakh Renewable Energy Development Agency, since 2000. He is also Conservator of Forests for Ladakh (since 2002). Since founding LREDA, Jigmet Takpa has completed the solar electrification of 39 villages using solar home lighting systems and solar lanterns – the first project of its type in India, supervised the design, installation and commissioning of two solar power plants (Nyoma, the first ever solar power plant in J&K; and Durbuk, 100 KWp), coordinated a survey of geothermal energy potential in Puga Valley (expected to generate more than 50MW), supervised installation of micro-hydro devices across Ladakh and overseen the installation of wind monitoring stations across the region. He achieved the designation of Special Focus Area Status for Ladakh and formulated a comprehensive action plan for the development of renewable energy in Ladakh, which was approved by the Union Cabinet, Government of India. The project includes the development of hydro power (12MW), 80 solar power plants, 25,000m2 solar water heaters, 10,000 solar cookers, 7000 solar passive buildings and 4000 solar green houses. In 2004-05 he coordinated the drafting of Ladakh Vision 2025, which now forms the basis for Ladakh’s development strategy. Jigmet Takpa was appointed Chief Coordinator for the Relief Commission, set up following flash floods which devastated parts of Ladakh on an unprecedented scale in August 2010.

Stanzin Dorjai hails from a remote village called Gya, 70 kms east of Leh. Like other children of Gya village, Stanzin too belonged to a nomadic family. His parents own herds of Yaks and sheep and Stanzin had a nomadic childhood, grazing Yaks and sheep while attending school simultaneously. While pursuing his 12th class in Government Higher Secondary School, Leh in 1995, Stanzin was selected as a campus student at Students Educational and Cultural Movement of Ladakh (SECMOL) hostel. It was this ambience that ignited Stanzin’s urge to excel in life. He is one of the founders of the Himalayan Film House, Leh, which is one of the best film making Studios in Leh producing music audios, videos, feature films and documentaries on regional, national and international levels. Stanzin has produced a number of documentaries as well as feature films and has worked with several national and international film makers. `Living With Change’ a documentary on the effects of global warming in Ladakh that Stanzin made for WWF India earned worldwide appreciations and this film is being screened in different countries.

Suhail is a mountaineer by profession and also teaches mounatineering at his Bouldering Cafe - GraviT in Leh, India, located at an altitude of 3500 meters.

Joost & Michiel finished an epic 30,000 kilometer ride from the Arctic down to the Antarctic, on bamboo bicycles, with a talk during TEDxAntarctica on the White Continent. They had spent 20 months on an incredible adventure which took them through 16 countries while learning more about Earth's most precious resource and how almost 1 billion people still do not have access to it. After having set foot on the Antarctic ice sheets the duo immediately felt that more needed to be done to bring actionable attention to some of the world’s water issues. So Joost & Michiel have now kicked off a new initiative whereby they are reaching out to primary schools worldwide in order to leverage their hard earned lessons on leadership, friendship, teamwork, endurance, and adventure to inspire action on water within the next generation. By linking primary school students with a local water project in a different part of the world, empowering them to organize and make a positive impact, while having fun cycling; the duo hopes to facilitate more tangible change, sustain inspiration, and create thousands of Cycle for Water Ambassadors around the world!