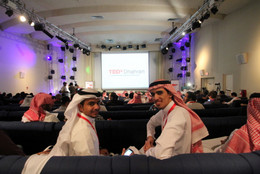 Saleh AlShebil is an assistant professor of marketing at King Fahd University of Petroleum & Minerals (KFUPM). He received his B.Sc. in Chemical Engineering from KFUPM in 1996. After graduation, he worked as a planning and operations engineer in Saudi Aramco till 1999. He then joined KFUPM and received a scholarship to the US, where he pursued his MBA and PhD in Marketing at the University of Texas at Arlington. He participated in several conferences, worked in consulting, and gave several talks and workshops. His passions: marketing, teaching, and technology.

Essam AlZamel is a web and technology serial entrepreneur. Essam was awarded "Young Entrepreneur of The Year" by Prince Salman Young Entrepreneurs Award committee in 2009. He founded Remal IT in 2002. He also founded multiple successful and innovative products, such as Awamer, ProVise, and Kammelna.com. Co-founded many other companies, such as Areeb, Fareegi , and Creative cinema. Essam is currently working on developing a new educational game called "Areeb World", an interactive virtual world that combines entertainment, education and social networking. Essam has a BS in Chemical Engineering from Tulane University, New Orleans.

Graduated from KFUPM in 1995, and is currently working for Abqaiq Plants Operations Department, Engineering Division. Started with Dhahran Toastmaster in 2002. Held many positions in the club (President, Acing president, VP ED twice, VP Publ.). Participated in many speech contests at the club level and area level. Conducted the first Arabic Toastmaster contest in Nov. 2007, won the third place at Kuwait Arabic contests in 2007, won the second place at Bahrain Arabic contests in 2008 and earned the distinguished club award from Toastmaster International. He is mentoring and helping eight new Arabic clubs in Saudi Arabia. He is the past president of Okadh Toastmaster club & President Asharqiya Toastmaster Club.

Arief Aziz is a huge TED enthusiast and the founder of TEDxJakarta. He studied IT in University of Indonesia. He didn’t like it. Now, he runs a consulting firm based in Jakarta that helps organizations manage their knowledge better. He likes that better. He is here now consulting for Saudi Aramco on that very subject. He is an aspiring social entrepreneur, and an amateur scuba diver.

Public relations practitioner with a track record that extends to more than sixteen years in communication strategy, business development, relationship with the media, and event management. He is a project manager and a member in the organizing committee of the Achievement Award of the governmental electronic transactions. Currently he is the Director of Marketing and Public Relations in Yalamlam business company. Worked in the press area with a number of newspaper publications such as Aleqtesadia, Alreyadi and Economic Week, and is currently writing for Al-Riyadh newspaper in the area of telecommunications and information technology. Established the Hyatt volunteer group in Riyadh to support orphans in adapting a normal life style after graduating leaving the orphans homes.

Interior Design graduate from the Department of Architecture at the University of King Faisal. Won an award at the Gulf Film Festival and another prize at the Film Festival of Saudi Arabia. Founder of "Cinema creative" company.

Assistant Professor in the Department of Mechanical Engineering, King Fahd University of Petroleum and Minerals. Obtained a PhD in Mechanical Engineering from the University of Texas, USA. He is currently the director of the College of Applied & Supporting Studies to develop skills in the university. He is also the founder and director of the volunteer work unit at the university. Has many initiatives in the field of volunteerism.

Member of the Shura Council. Writer for several Arabic newspapers and magazines. Has a wide popularity among youth. Has experience in the field of volunteerism. And is also a successful businessman.

The creator of many animation shorts published on YouTube and featured on MBC TV channel. Born in Dawadmi (West of Riyadh) in 1985. Graduated from high school in 2003. Joined Leo Burnett Advertising in 2006 as graphic designer. Joined Zain KSA in 2007 as a creative consultant. Joined Mobily as portal development supervisor. Now working as an independent Animation director / producer.

Aiman Mufti is currently the IT manager for one of Aramco's new projects. He was the project manager responsible for establishing the IT Future & Innovation Center in Saudi Aramco. Aiman started his 13 years career with Saudi Aramco by getting practical experience on the impact of IT technologies in the Oil and Gas business. Later, he worked with the corporate team that introduced the first automated workflow engine in the company, and was one of the founders of the Content Management System (ShareK). He also led the design team of ShareK, which is currently used by more than 30,000 employees. He worked with Microsoft Corp. USA on a one year special assignment. Aiman graduated with a BS in Computer Science from KFUPM in 1997; and is currently pursuing a Master of Computer Science in Software Engineering and Artificial Intelligence. He published several technical papers and delivered technical speeches in national and international events.

Saudi journalist and a social entrepreneur. Started working in the media field since 2006 through Al-Yaum newspaper. Worked as a reporter for the National Saudi TV channel, Ummah magazine, and 4shbab channel. He is also an active figure in the field of social services. He founded and managed many non-profit organizations like the Khobar Boys (a volunteering team), Iqrani (reading initiative), Al-Forsan Club (orphan's club), and the Winner's Breakfast. Recently he has been chosen by the Arab Association for Social Development to be a consultant for youth development projects.

Entrepreneur, inventor, and writer. Founder and president of the Astrolabe Center for Training - the first Arab center specialized in the training of inventors. Presented numerous lectures and courses in motivation and the skills of invention. Lost his vision as a result of a defect in the optic nerve. He is completing his university studies in Industrial Engineering at King Fahd University of Petroleum and Minerals. He is considered to be the first blind person to study industrial engineering in the Arab world. He invented nine devices in the area of technology support. He won several awards in the field of invention and science.

Saudi munshid, a member of the Association of Islamic Art. Released many albums, the first was titled "Rafeeq Aldarb", and was released in 1994. He participated in many international festivals. Won the International Youth Islam Service Award in 2009. 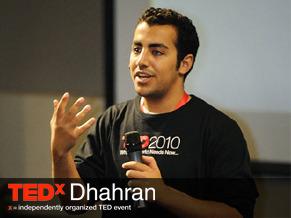